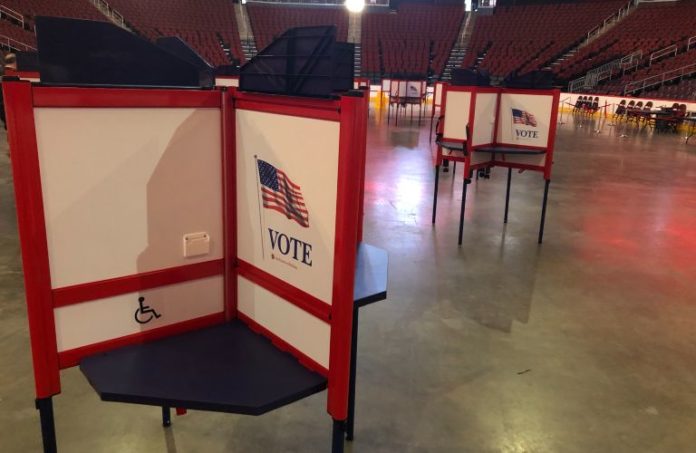 When the Prudential Center serves as a polling place for as many as 8,000 Newark residents on Tuesday, it will be a visible byproduct of a months-long process to ensure the building is used for the public good. Prudential Center and Harris Blitzer Sports & Entertainment officials also hope it will be the start of the arena and the company being even more involved in the voting process.

Jim Leonard, senior vice president of government relations for HBSE, said the organization is eager to do more.

“Tomorrow is the culmination of a pretty robust effort that we’ve undertaken with regard to civic engagement,” he told ROI-NJ.

“Obviously, in the world of COVID-19, when social distancing is important, a 650,000-square-foot facility lends itself to being an in-person polling place. We were glad we were able to work together with (Essex County) to open up our doors.”

Leonard said the company has been active on its social media platforms to make sure its followers are up to date on all issues related to voting. The results, he said, have been strong.

“Whether it’s through Facebook or Twitter or Instagram, we’ve had well over a million impressions,” he said. “Through those platforms, we were making sure that people knew what the deadlines were, where they can register, how they can register and, more importantly, making sure that people were aware of all of the options that they had when it comes to the voting process.”

That process reaches its conclusion Tuesday. Leonard said the Pru Center will be ready.

Registered voters in those districts will be able to enter the arena at the corner of Lafayette and Mulberry (the entrance with the Martin Brodeur statue). Leonard promises there will be plenty of signs and volunteers directing voters how to enter.

When voters enter the building, they will proceed in a socially distanced fashion onto the arena floor and then out through an exit connected to the hockey practice arena, he said.

Leonard said the arena is hopeful that the city will close Mulberry Street (as it often does for games and concerts) throughout the day. Voting, which beings at 6 a.m., goes through 8 p.m.

Leonard said county voting officials will handle the logistics of voting, making sure those who arrive are properly registered for the site — and will help those needing to fill out provisional ballots and the few that are eligible to use actual voting booths.

Pru Center employees will handle all other logistics, including having hand sanitizer for all — and masks for those who may need them.

While Leonard said the arena does not anticipate handling all 8,000 registered voters it has been assigned — knowing many will have pre-voted before election day — he said those helping with the process will be ready for a full house. Just as they would for any sporting event or concert.

“In all likelihood, it’s not going to be 8,000,” Leonard said. “But, between the county and the city and our staff, we’ll ramp up just like any other game or event. We know what the potential could be. And we’ll make sure that we’re staffed accordingly.

“When it comes to something like this, we want to make sure that we have the right number of directional markers, volunteers, hand sanitizers, wipes, masks and all of that. The best thing that can happen is that we have plenty left over.

“We’re just excited about the fact that this building is open for the first time since it shut down on March 11. We want to be ready.”

More than that, Leonard said HBSE officials said they hope they can do it again.

“It would be really cool if this became an annual event,” he said.

HBSE officials view their election day efforts as just another in a long line of activities they have done to give back to the community.

“We have a great foundation to build on,” Leonard said. “The fans for the New Jersey Devils and concerts of Prudential Center have been very generous to the community. We run the Hockey Fights Cancer initiative, we do food drives, coat drives, toy drives — they are all designed to make sure that we are helping our neighbors wherever we can.

“Our challenge is to do even more. Opening the building as a polling places is a good step. But what else can we do?”

Leonard said it will be an organizationwide effort moving forward.

“The beauty of working for HBSE is that, once you finish with a successful program or initiative, the conversation starts on how do we do it better,” he said. “How do we make more of an impact? How do we get a larger turnout to help the community?

“That’s the challenge that we have. After tomorrow, we’ll have a debrief and the conversation will switch toward what’s next: How do we be even more impactful?”

McKoy is leaving NJPP, but his influence on issues in N.J....

Pump your own gas: Will latest bill on age-old debate make...