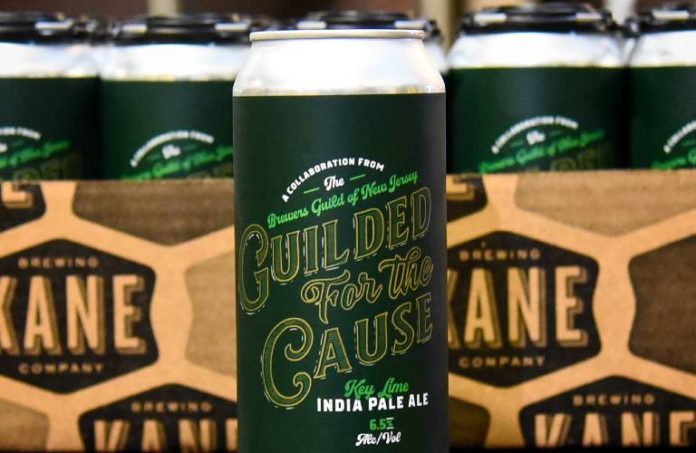 You have to hand it to the Brewers Guild of New Jersey: It is drawing attention to the issues impacting breweries and brewpubs across the Garden State in the best way it knows — releasing a new beer.

To launch their “Guilded for the Cause” campaign, the Brewers Guild released its first Guild collaboration beer: Key Lime India Pale Ale.

The beer, brewed by Kane Brewing Co. in Ocean Township, is being distributed statewide this week and being sold in four-packs and on draft at Kane Brewing Co. for home delivery and to-go sales, and at various restaurants, bars, liquor stores and grocery stores across New Jersey. (Scroll down for a list of retail locations.)

According to officials at the Guild, it was founded in 2018 to better represent the policy interests of New Jersey’s pioneering independent craft breweries and brewpubs in the region’s ultracompetitive alcoholic beverage market.

The Guild feels its membership is the foundation of today’s flourishing New Jersey craft beer industry, which has grown exponentially in the last decade. As breweries in the state face the financial impacts and business implications of the current worldwide COVID-19 pandemic, the “Guilded for the Cause” campaign hopes to provide the necessary resources to continue the fight for all breweries statewide through what Guidld members know best: New Jersey craft beer.

Here are the Guild’s top priorities:

The Guild hopes its first collective creative effort, and each edition of new collaboration beers released going forward, will help communicate to New Jersey craft beer enthusiasts and supporters what breweries need and how they can help.

And its members hope you will enjoy the beer.

Coming in at 6.5% ABV, the beer features a grain bill of Violetta Pilsner Malt and Raw Wheat, with additions of Sabro, Cashmere and Motueka hops. Proceeds from the sale of this beer will go toward Brewers Guild of New Jersey and its advocacy efforts on behalf of its licensed brewery and brewpub membership.