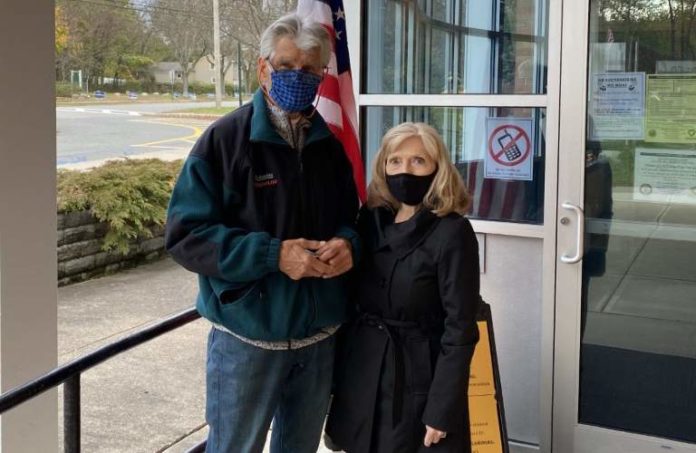 Beverly and Bob Diering of Morris Plains did what they have done every four years since 1968: They voted to help determine who will be the next president of the United States. And they voted on Election Day.

That, they said, was very important to them.

The Dierings got their ballots weeks before — like most everyone else in New Jersey. Voting early, however, did not sit right with them.

“I voted today because I believe you vote on Election Day,” Bob Deiring said. “I think that’s the day. I think the rest of it is nonsense.”

Bob Diering said the idea that everyone got a ballot early was a mistake.

He also believes in a secret ballot.

“You have to sign that ballot,” he said. “I disagree with that, too.”

New Jersey officials — starting with Gov. Phil Murphy — have continually praised how the vote-by-mail process has been going, noting that 90% of the total who voted in 2016 already had cast a ballot by Election Day.

Bob Diering thinks it’s a mistake. He hopes this way of voting does not become the standard.

“You have Election Day,” he said. “It’s the way it’s been since the country is founded. Why extend it? So, should we extend it for a month? Why not have it two months? Why not start voting six months in advance? There’s no end to it.”

Early voting, Bob Diering said, can change the outcome, too.

“Things happen as you get close to election,” he said. “If I cast my vote in August and something comes up in September or October, I can’t change my vote now. I’d just as soon get as much information as I can, come on the day I’m supposed to vote, do what I think is right in my mind at that time.”

The early voting had an impact in Morris Plains. Voting at the town’s community center, which usually brings a steady stream of the town’s approximately 6,000 residents, had just a trickle Tuesday morning. That means a lot of votes likely had been cast already.

Beverly Deiring said she worries about how they will be counted.

“I don’t know how they’re going to be able to accurately count all these votes,” she said. “And I think you’re going to see discrepancies — people who are dead that have gotten ballots, people who have two homes in different states are getting two ballots.

“I can understand requesting a ballot if you’re nervous about the virus, but, otherwise, I think you come out and you vote on Election Day.”

Bob Diering, a Vietnam veteran, said he believes in the process — and hopes it never changes. And he’s annoyed that a winner is not likely to be declared by the end of the day.

“I think that, as the day progresses, you should be able to know who is going to be your next president of the United States probably that evening or early the next day,” he said.

As someone who cast his first presidential votes amid the turmoil surrounding the Vietnam War and the Watergate scandal that led to the resignation of President Richard Nixon, Bob Diering said he’s disappointed in how the political process has evolved.

“I think this is the most contentious election I’ve ever seen,” he said. “I don’t know how this happened or when it had happened. It’s insidious.”

And there’s plenty of blame to go around, Bob Diering said.

“There are extremes on both sides,” he said. “And it doesn’t seem that the people that we elect to office can get together and compromise and come away with a solution that is good for the country. I think they’re dug in. And I think a lot of politicians are in it for themselves, not for the general good.”

Both Beverly and Bob Diering declined to say whom they voted for. Bob Diering said it shouldn’t matter. To him, it’s part of your duty as a citizen. And just the first part of the election process.

“You support the people who are elected,” he said. “You cast your vote and then, whatever happens, happens.”

And you cast your vote on Election Day.