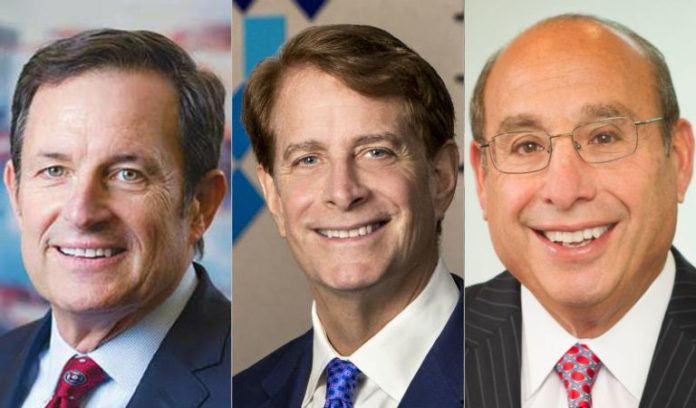 Hospitals and health systems have gone through a tremendous consolidation in the state in the past few years. With each merger and acquisition, cost savings through shared services and increased buying power frequently were mentioned. As was the ability to collaborate over a larger network.

No one ever mentioned that it might help during a pandemic, too.

Nearly eight months after the first COVID-19 case was diagnosed in New Jersey, a case can be made that the state seemingly has benefited from having three large systems — Hackensack Meridian Health, RWJBarnabas Health and Atlantic Health — anchoring the outbreak.

But not necessarily why you may first think.

Sure, the systems themselves were able to share personal protective equipment and health care workers among their various hospitals: HMH has 12 acute-care hospitals, RBJBH has 11 and Atlantic has six. But that sense of camaraderie existed among all hospitals and health care workers, as those in South Jersey — even many from out of state — rushed to help North Jersey when it was crushed by the first wave.

Barry Ostrowsky, the head of RWJBH, feels the fact that the industry was able to communicate its needs and wants — and issues and concerns — with Gov. Phil Murphy’s administration had a huge impact. The fact that the biggest systems have hospitals throughout much of the state was a key in the speed of delivery.

“I think the on-the-ground reaction was much better,” he said. “From a policymaking standpoint, it was far easier, because those that were making policy and our government leaders could reach out to a few of us and effectively cover many institutions and get a cross-section immediately, in one phone call, of what we’re experiencing in multiple geographies under multiple circumstances.

“So, I don’t think there’s any question about the fact that, both in the practical delivery side, and the ability to oversee the entire state, having these systems made a big difference.”

In addition to communicating with the big three systems, the state also appointed a hospital overseer for each region, with Sheeref Elnahal and Mary Maples of University Hospital in Newark handling the North, Amy Mansue of RWJBH and now Inspira Health handling the Central and Kevin O’Dowd of Cooper University Health Care anchoring the South.

Ostrowksy gives a lot of credit to Murphy and Health Commissioner Judith Persichilli for their willingness to interact with the sector. That was just as important, he said. And, while it seems like an obvious move, Ostrowsky said it is one that leaders of other states did not so quickly embrace.

“I think we have done better in New Jersey than other places,” he said. “One of the things that is mind-boggling to me is that New York, New Jersey and a couple of other states out East were a spectator sport for the rest of the country.  People watched us. And, you would have thought, based on what happened here and the surge that we experienced, people would have done things to suppress as much as possible, certainly maximally mitigate the possibility that it would happen in other states. And they didn’t.

“I’ve spoken to my colleagues around the country. And, when I have explained to them the way that our industry has been invited by state government at all levels to participate in policymaking and the way we’ve been consulted and the effective seat we’ve had at the table, I have to tell you: Three-quarters of the states represented by colleagues I’ve spoken to — and I’m talking about major institutions — don’t have a similar relationship with state government. And as a result, they’re doing all they can, but they are frustrated with the fact that they don’t have the ability to convey to those making policy and regulatory decisions directly that which they’re experiencing.”

No system was hit as hard as HMH.

Its CEO, Bob Garrett, said its size was a big difference in handling the outbreak.

“I think it was a case where bigger might have been better, but it wasn’t just about size, it was about being integrated,” he said.

“During the height of the pandemic, when the virus hit the northern part of the state more significantly, when hospitals like Hackensack and the Palisades reached capacity, we were able to transfer patients within our network seamlessly — in a matter of hours — to our central and southern hospitals.

“We were conversely able to bring staff up from the south and from the central regions to the north region to help out, we were able to bring supplies, ventilators up, too. If all those hospitals were independent entities, it would have been much more challenging and much more difficult for them to manage.”

“One of the things that I think was a lost opportunity on the federal level was the great push to get a vaccine online quickly: Operation Warp Speed,” he said. “I think they put all the eggs in the vaccine basket. If they had done an Operation Warp Speed for some of the some of the therapeutics — like the antibody therapies that President (Donald) Trump got and former Gov. (Chris) Christie got — and incentivize the drug manufacturers to expedite the production, I think we could have used that as a stopgap measure until the vaccines were fully available and ready for mass distribution.”

As the second surge in New Jersey grows, Ostrowsky and Garrett are confident the state will be able to handle it because of their willingness to work together. Ostrowsky said he, Garrett and Atlantic CEO Brian Gragnolati remain in regular contact.

“We’re all friends in the industry, for sure,” he said. “Bob, Brian and I were on the phone at least twice a week (during the surge), sharing best practices, talking about what should be done. In addition, our colleagues, be it our nursing or clinical folk or materials management folks, spoke with each other on a regular basis.

“So, when the three systems spoke to one another, and shared a best practice that covered the majority of the population in New Jersey, that’s an advantage.

“I think it’s true, there are pros and cons to having large systems. And it’s always a debate. But certainly, in the context of fighting the pandemic — at every level — I think it was a godsend.”

For Edgewood Properties, 30 years of building — and giving back