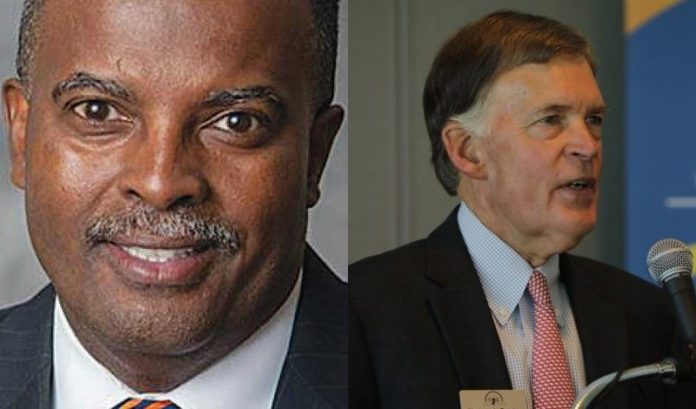 There will be calls to include more Blacks on boards and in positions of leadership, and pushes to give Blacks more access to capital and vendor contracts.

But, while the announcement sounded easy on the webinar, history shows it will not be easy to implement. And the conversations around it will be hard.

That’s OK, Harmon said. He only has straightforward conversations. And recent history — post-George Floyd history — has shown him that others may finally be ready to have the substantive conversations he has wanted to have for decades.

“This is kind of a reset opportunity for the state,” he said. “I can tell you that the conversations that I’ve had with corporations around the state over the last several months had been different. They’ve been more substantive, more engaging, the follow-up has been there and the outcomes have been tangible from a standpoint of building a foundation to grow.”

The details of the initiative are coming, they both said.

Harmon said there eventually will be some metrics — perhaps a scorecard — to report on what leaders and organizations are doing what.

The good news: Plenty already is happening, they both said.

“I think we both have been encouraged by the number of companies that have come out with their own diversity initiatives and made those public,” Bracken said. “The governor has come out with a creation of a CEO council that hosted many of the state’s largest corporations and (discussed) their commitments to adding more diversity to both their employment and to their supply chain, which is one of our goals also.

“And the state Legislature Joint Committee on Economic Justice and Equal Employment Opportunity was also reconvened. (It) also complements exactly what we’re trying to do.”

Bracken said the state chamber has added five Black business and faith-based leaders to its board in an effort to increase its own understanding of the issues.

“We are already seeing some progress from the (Gov. Phil) Murphy administration, in terms of getting more Blacks, managing public dollars,” he said. “That had not happened until recently.”

Harmon said there were sizable or substantial opportunities for a number of black businesses, which he called encouraging. He also said there has been progress at Newark Liberty International Airport, working with the Port Authority of New York and New Jersey to produce more opportunities for Black vendors.

“There is starting to be some movement on the ground,” he said. “It’s encouraging, but we still have a long way to go. And I’m optimistic that this initiative will bear the fruit that we’re hoping for.”

It begins with the talk, Harmon said.

“It’s going to start with some real direct conversation with people who have the authority to make decisions,” he said. “And they have to be comfortable with the fact that the numbers are the numbers.

“If you have zero Blacks on your board, if you’ve never done business with a Black business, we’re going to respect and acknowledge that and keep that confidential. But the goal is to move from zero to one, and then from one to two and ultimately two, three and four, and so forth. So, it’s going to take that type of direct engagement, direct commitment.”

This is as much of a moral imperative as a business imperative, Harmon said. He cited a recent study that said if the country could close key racial gaps in wages, housing, education and investment, approximately $5 trillion could be added to the U.S. GDP in five years.

Bracken said New Jersey is the perfect place for that to take place.

“I think it really boils down to one very simple thing,” he said. “Our state is one of the most, if not the most, diverse states in the country. And we’re not taking advantage of that diversity. We’re leaving a lot on the table. And what we’re leaving on the table can really add to the state’s GDP and the economic health of our state. That’s probably what drives us the most.”

Bracken said the movement can transform the state.

“There’s a lot of opportunity,” he said. “John and I plan to take this on very vigorously. We’re going to focus on the areas of education, employment and entrepreneurship to try to help the Black and brown community increase the number of board seats and companies in the state, increase more participation in supply chain contracts, increase the number of jobs being offered, increase the opportunities for black individuals within corporations to achieve the same potential as the white population has.

“Many things need to be addressed. But, with a partner like John, I’m very confident we can get this done. It’s not going to be done overnight, it’s not going to be easy. But at the end of the day, it is going to help our state and I think, to use the governor’s often-use phrase, (create) a stronger and fairer economy.”