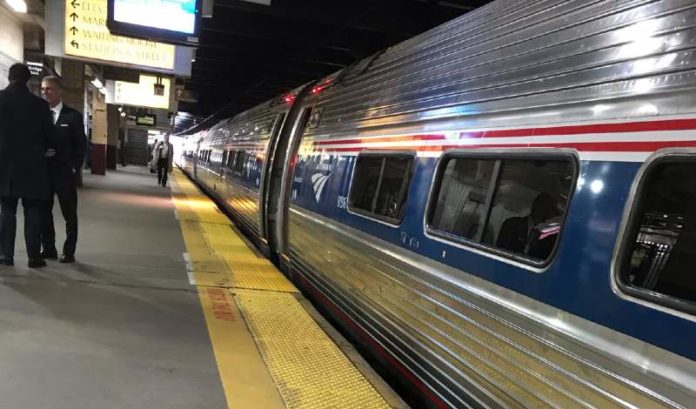 The Walk to Washington — the annual train ride to the nation’s capital where New Jersey’s top business, political, education and nonprofit leaders mingle in the biggest networking event of the year — will not take place in 2021, New Jersey Chamber of Commerce CEO Tom Bracken announced Monday morning.

No substitute event will be held in its place, either, Bracken said. The trip, sponsored and organized by the chamber, traditionally takes place at the end of February.

Bracken said he is hopeful the trip can return in 2022.

“Clearly, in the current environment, it is not a good idea to host a networking event that packs together hundreds of business and government leaders on a charter train and then in a hotel for a dinner,” Bracken said. “Our intent is to resume the Walk to Washington in 2022 — conditions permitting — because it is an important event for New Jersey’s business community.”

The Walk to Washington, which dates back to the 1930s and has been held 83 times, isn’t feasible for a number of reasons — led, of course, by the COVID-19 pandemic, which would have severely limited capacity and movement on the train.

That’s if people would have been willing to go at all — an unlikely scenario at this point.

Bracken said making commitments to the partners in the trip, Amtrak and the Wardman Park Marriott in Washington, D.C., did not make sense, either.

Holding a different type of event in New Jersey wasn’t appealing, either. For starters, it would mean having the New Jersey congressional delegation come home — which always is a risky proposition.

More than that, Bracken said, is the uneasiness over gatherings. Not to mention reduced-capacity restrictions that appear likely to be in place in some form next February.

“We’ll try everything we can to get it back into the mix in 2022, but it’s just not happening next year,” Bracken said.

Business group leaders apprehensive about budget: Siekerka says, ‘This is all...

Bracken walks back some of his comments at business summit