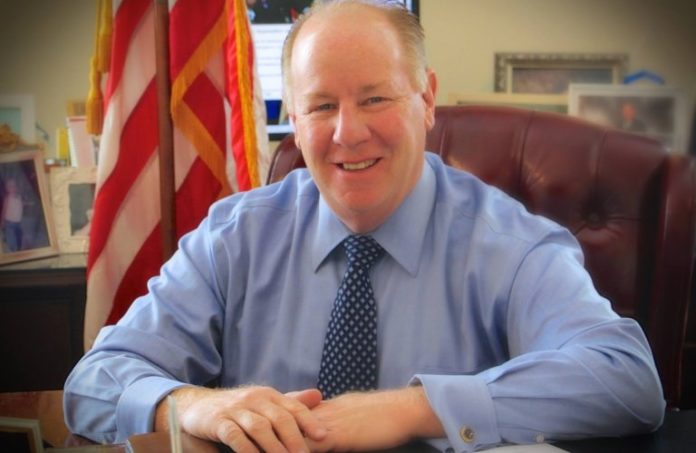 Marc Berson has been involved in real estate around Newark Liberty International Airport and Port Newark-Elizabeth for decades. So, he knows the scenery. And he knows how it has changed.

“As you drive along Frelinghuysen Avenue, you see loads and loads of older industrial establishments that have been retrofitted and are in different uses today, but you don’t see a building that’s a new contemporary warehouse, manufacturing space,” he said.

The reason is simple: As land values escalated, it became far less cost-efficient to tear down and start again. Retrofitting the building and finding a tenant was the much smarter play economically, he said.

This morning, Berson’s Fidelco Realty Group, along with Elberon Development Group and FreezPak Logistics, announced a groundbreaking for a 140,000-square-foot, state-of-the-art freezer warehouse facility on the Elizabeth/Newark border.

The project will be located at the corner of Newark Avenue and Virginia Street — on a parcel that has been vacant since dye and pigment manufacturer Magruder Color moved out in 2006.

Both Newark Mayor Ras Baraka and Elizabeth Mayor Chris Bollwage were thrilled to see the announcement of a facility that will bring approximately 50 jobs. It is expected to open in the fall of 2021.

“Newark’s strategic position as a transportation hub, combined with our available land for commercial development has made us a center for state-of-the-art warehousing and the jobs it creates,” Baraka said. “Once again, Fidelco has recognized the opportunity for economic growth that Newark offers and has acted to help us collectively move Newark forward.”

Allison Ladd, who serves as deputy mayor in Newark and the director of economic and housing development, said the project will be a big boost for the area.

“Fidelco and FreezPak have made a wise choice for themselves, while also strengthening an area where Newark is seeking to accelerate development,” she said.

Bollwage hopes the property helps firmly establish Elizabeth as the place for freezer warehouse around the port. He feels its location makes Elizabeth an ideal spot for this niche market. And he said he’s been encouraging Dave Gibbons, the president of Elberon, which has been the top developer in the city for generations, to make this is a priority.

“We’ve been working with Elberon on the idea that we need to develop more of a freezer-type warehouse business here in our city because of the access to the port,” Bollwage told ROI-NJ. “More and more goods were coming in, and the necessity of some type of freezer warehouses was going to be important to the future growth to the warehouse industry.

“Elberon has followed through on that, not only with this lease, but two other previous leases with different firms.”

Gibbons said these building could lead to more in the area.

“We believe this project will help revitalize an area that has been stagnant for many years, and perhaps serve as a catalyst for further redevelopment,” he said.

Of course, a lot of that depends on finding land, which is not easy.

Bollwage has high hopes. And he hopes Elizabeth is in position to benefit from the inevitable need for space for vaccines for COVID-19 or other illnesses.

“One of the things I’ve talked with David about it is whether there is any way we can get a warehouse with minus 60 degrees and be in a position to store vials of an eventual vaccine,” he said. “That’s something to be discussed.

“Retrofitting a place that can do this, bodes well for the future, especially in these difficult times with a pandemic. That’s not to say that this place is going to be able to do it. I’m just saying that that’s the vision that’s being created. By having freezer warehouses, you can move into more directions.”

Of course, tax abatements played a part in the project, too. Bollwage said they are necessary for this project — and future projects. But he views them as a win-win, too.

“The tax abatement makes it attractive for not only the developer, but the tenants, in order to make sure that the project is long-term viable,” he said. “The tax abatement is structured where it increases over the years, as opposed to paying a lot of the taxes up front.

“The city will get more and more in Year 10 and Year 20. And the reason that benefits a city is because it affords the developer and the tenant time to establish their business and grow, but it also gives the city tax revenue on what has been a vacant parcel for many years. It also does not unburden the city, because we’ll get more and more revenue in the years to come.”

The location of the FreezPak warehouse is intriguing to Bollwage, too.

“Here in the city of Elizabeth, that parcel has been vacant and unused for many years. It sits at the edge of the city, right next to what will eventually be a 632-unit multiuse development with residential and retail.

“So, this will provide some jobs for residents, as well as an aesthetic, pleasing option next to what eventually will become a nice retail project.”

Berson said development always comes down to making the dollars work. Right now, they do. Berson said he welcomes the ability to bring industrial back to the area.

“It’s extremely exciting to see some movement in the industrial area,” he said. “We’ve seen people come in and then taken over buildings and committed to the Newark area, but we haven’t seen new industrial buildings going up in this area.

“One of the reasons is that the people who owned the buildings wanted too much for the buildings to be able to demolish them and then rebuild.”

“As this industrial boom has taken off in the last number of years, we’re seeing land values go up,” he said. “The land is worth more without the old building on it than it is with the building on it, because there’s the potential for much higher rents than ever before in the industrial market. This is an example of that.”