On a day when New Jersey announced more than 3,500 new COVID-19 cases — and he gave municipalities the option of instituting an 8 p.m. curfew — Gov. Phil Murphy had a message for those who have complaints with the restrictions he has put in place.

“You know what’s really uncomfortable and annoying? When you die,” he said.

Murphy, speaking at his COVID-19 briefing, said residents need to come to grips with the growing number of cases: 3,517 announced Thursday, meaning 10,472 cases since Monday. They are numbers the state has not seen since March and April.

“Let these numbers sink in,” he said. “COVID is not done with us, unfortunately, not by a long shot. Unless we all recommit to the common-sense measures that got us past the first horrendous months of this pandemic, we are in for a long and dark winter before a vaccine becomes broadly available.”

Because of this, Murphy signed an executive order giving municipalities and counties the option to regulate operating hours of non-essential businesses after 8 p.m. Murphy sees this, in addition to the other restrictions he announced Monday, as a good move that echoes the moves being made in other states.

“I must note that other states and cities are following suit,” Murphy said. “Notably New York, where Gov. Andrew Cuomo announced a 10 p.m. closure time yesterday. Connecticut also has instituted a 10 p.m. close. Maryland and San Francisco, among other places, are pulling back on indoor dining.”

“We know that there’s been transmission linked to youth hockey team activities,” Murphy said. “With numbers rising across our region, this is an important state to mitigate further community spread and protect public health.”

Murphy also announced that New Jersey has become one of the first states to receive CUE Health’s molecular rapid test. This test boasts a 99% accuracy rate within 20 minutes. The governor’s administration plans for distribution to vulnerable communities, including long-term care facilities and veterans homes.

“These numbers are lower than I believe any of us could have anticipated, and remember that we have over 3,000 buildings as the denominator,” Murphy said. “All in all, while we fully expected and prepared for instances of in-school transmission, these numbers are a sign that those preparations to mitigate in-school spread are working,”

In a positive note for the schools, Murphy also announced that 70% of districts report no device connectivity needs. Since August, the digital divide among districts has been reduced from 231,000 students to fewer than 40,000. 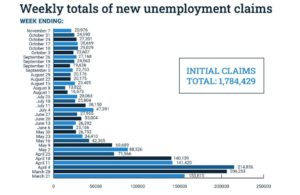 The state’s Department of Labor & Workforce Development said unemployment for the week ending Nov. 7 was down 15%, marking the fourth consecutive week of decline.

The state said there was a weekly total of 20,976 new claims, or approximately 3,700 fewer new claims than the prior week.

Approximately 1.78 million people have applied for unemployment since mid-March, and 1.465 million have met the monetary requirements for benefits. Of those, 96% have received payment. The average claimant has received more than $13,000 in benefits.

The department has distributed $18.7 billion in payments to unemployed and underemployed New Jersey workers, including $241 million last week.

Murphy on President-elect Joe Biden’s appointing of Ronald Klain as chief of staff:

“Ron’s a guy I’ve known, plus or minus, over 20 years. He’s a guy that we’ve consulted on the back channel on our current reality. He ran the nation’s Ebola efforts, in addition to a distinguished career both in the public and private sector. Hat’s off to Ron, we wish him the very best. He and I exchanged notes overnight. I’m very excited to work with him.”