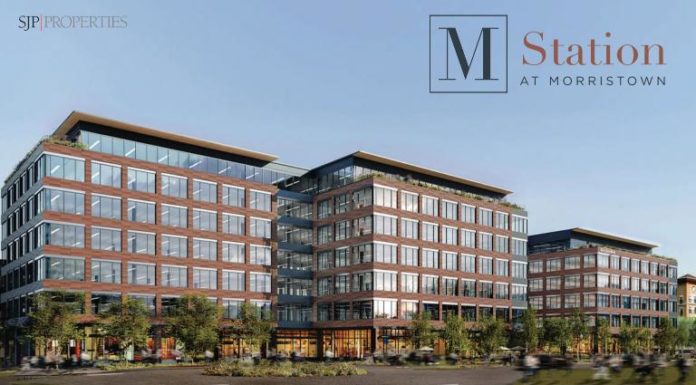 Peter Bronsnick, the New Jersey president for SJP Properties, couldn’t resist as he stood under a tent in a vacant parking lot in Morristown that one day will become M Station, one of the nicest downtown office structures in the state.

“I do recognize the irony of Friday the 13th, rain, a pandemic, a hotly contest election — and everything else that’s going on in 2020,” he said. “I think that’s really more about a testament to all of you, and the work and effort that’s gone into this project. And, despite those obstacles, here we stand.”

Where he stood was at a celebration for one of the most significant commercial development in Morristown in the past three decades.

M Station will be located along Morris Street, between Lafayette Avenue and Spring Street. The project will consist of two office buildings producing up to 400,000 square feet of high-end office space, 33,000 square feet of retail space and 1,000 parking spaces.

There also will be an abundance of outdoor space, with plans calling for large outdoor terraces on the penthouse floor of each building, a public plaza and major streetscape and infrastructure improvements.

M Station, which will replace an outdated strip mall, also will serve as a connecter between the town’s New Jersey Transit station and its well-known Green.

Bronsnick noted all the potential of what he called a transformative development project — one he said holds promise of economic growth at a time when it is so sorely needed.

“M Station will deliver true headquarters quality office and retail space to Morristown downtown, which will attract high-caliber tenants that contribute positively to the town’s commercial base, and support Morristown civic and philanthropic entities,” he said. “M station is a pillar of what communities require in order to sustain themselves as viable, live, work, play and stay destination.”

It already is doing just that.

Deloitte already has announced it is taking approximately 110,000 square feet in the East building, moving its operations from nearby Parsippany.

The first phase of the project is expected to be completed by the fall of 2022.  It can’t come soon enough for Morristown Mayor Tim Dougherty and the town council, which worked for years to bring a vitally necessary redevelopment project to the area.

“We are so thrilled to have you anchor this part of our downtown,” Dougherty said to the Deloitte leadership in the crowd. “We look forward to that day that you walk into that building, and we’ll be right there with you.”

SJP founder, Chairman and CEO Steve Pozycki has built numerous Class A spaces in the state and in the region. He said M Station has brought him special pride.

“What motivates our team every day is the opportunity to create enduring properties where every element is carefully considered to provide superior experience, and this is no exception,” he said. “We’re thrilled to create a center of commerce that was designed, designated by the town as an area in need of redevelopment.

“We applaud Morristown’s leadership or having the vision to realize the positive impact that M Station will make. And we look forward to delivering a meaningful project at a time when economic development of this caliber and significance is sorely needed in our communities and state to move forward.”

Which takes us back to irony: The celebration of the opening of corporate office space at a time when nearly all companies are working from home.

Officials from SJP, Deloitte, Morristown — and everyone else at the event — are confident that will not always be the case. And, while the workplace may be different, it will be needed.

Bronsnick specifically thanked Gensler, the architecture firm that has created a project that works for today — and tomorrow.

“(They) created a beautiful yet contextual design for this development that will stand the test of time,” he said.

And he thanked Bob Donnelly and Cushman & Wakefield, which is leasing the project.

But, most of all, he thanked Deloitte, for its willingness to believe in the project.

“We really view this as providing an unparalleled sort of work environment, and the ability for you to use Morristown as your amenity for your entire organization,” he said.

And, when workers are ready to come back to the workplace, Bronsnick feels M Station will be a catalyst for an economy recovery in the area.

“It will help ensure that Morristown’s downtown is vibrant with the addition of new daytime workers, which is so critical to the resurgence of our retail efforts in all of our towns throughout New Jersey,” he said.

“M Station will also provide new retail options along the streetscape. And it will increase foot traffic to existing downtown retailers and restaurants, as well as facilitate millions of dollars in infrastructure enhancements that will significantly improve pedestrian safety and traffic flow in the area.”