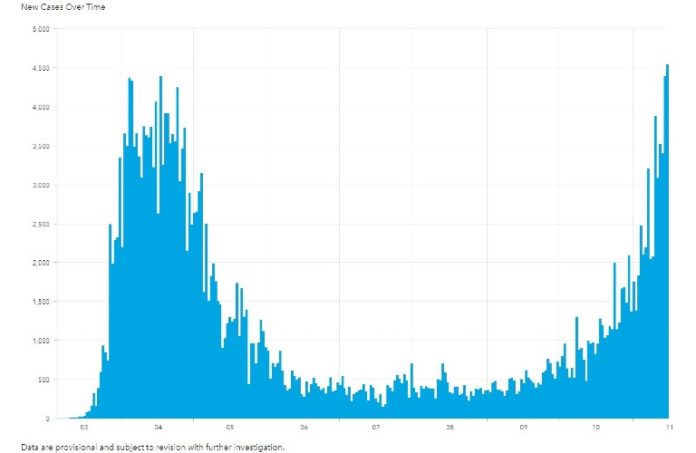 New Jersey this weekend had its two highest single-day totals of new COVID-19 cases since the pandemic reached New Jersey, a two-day total of 8,935 that has many wondering if Gov. Phil Murphy will announce more restrictive measures Monday.

In the tweet announcing the total Sunday, Murphy said: “These numbers are ALARMING and continue to rise. Take this seriously.”

These numbers are ALARMING and continue to rise. Take this seriously. Wear a mask. Social distance. Stay safe.
https://t.co/JW1q8awGh7 pic.twitter.com/gdjREnqJyn

Whether that warning will come with more restrictions is unclear. Murphy met with governors from five other Northeast states this weekend, but the group did not immediately announce any new regulations. That could come as soon as Monday.

It is fair to say there is a growing concern — but not necessarily a complete alarm — from the health care community. And there is a sense of worry from business and municipal leaders, who fear what more restrictions would do to an already fragile economy as it approaches its busiest time of the year.

Health care leaders have continually said in recent weeks that they are better prepared for this second wave of the virus — that they understand how to treat it better and that the average patient stay in the hospital, when it comes to that, is much shorter, since many of those being diagnosed now are from younger communities that are not impacted as greatly.

That being said, there is cause for concern about the potential of younger people transferring COVID-19 to more vulnerable populations.

Sheeref Elnahal, the CEO of University Hospital in Newark and the former state health commissioner, tweeted that there are only two reasons why University isn’t overrun right now:

“But, the more young people get it, the higher chances vulnerable people will,” he tweeted Saturday.

Elnahal also is concerned about how quickly the numbers are growing.

“These numbers are alarming,” he said.

Analyzing the numbers is difficult. Some say they are greater because there is more testing — and the numbers in the spring are actually low.

Others say the trend upward is enough for there to be a concern. That trend certainly is apparent.

If you count Friday’s total (3,399), the state has had 12,334 new cases over the past three days. That’s more cases than the state had in all of July (11,709). July was the month Murphy pulled back from his decision to reopen indoor dining, as well as issued an executive order mandating face coverings.

And for those who say COVID is not as deadly as it was in the spring, Murphy also announced there were 44 COVID-related deaths over the weekend — a number far higher than it has been recently. The state has now had 14,765 fatalities, with nearly 2,000 more expected to have been from COVID-19.

Murphy, who has continually stressed in recent days and weeks that COVID-19 is still powerful — while acknowledging the state is suffering from COVID fatigue, reiterated his plea for more personal responsibility.

That being said, the governor could step in with more restrictions as soon as Monday morning.

Murphy and governors from five other Northeast states (New York, Pennsylvania, Connecticut, Massachusetts and Vermont) were scheduled to meet this weekend to discuss the issue.

Newark mayor Ras Baraka tightened restrictions in his city, limiting gatherings to 10 and closing non-essential businesses by 10 — and even earlier in some areas.

Baraka said residents in Newark are more at risk than others.

“Stricter measures are required in the city’s hotspots in order to contain the virus and limit the spread,” he said. “I know we are all tired, but the virus is not. Therefore, we must remain vigilant and do what is necessary to get this under control and save lives.”

Jersey City Mayor Steve Fulop, more than a week ago, said he is unsure of the benefit of curfews, saying they will crush businesses but not necessarily stop the spread of COVID-19.

Eileen Kane, the state director of the National Federation of Independent Business, said Saturday she is concerned about what the regional summit could mean for small businesses.

“The economic wreckage that added restrictions could cause here in New Jersey should be carefully considered because the consequences could be dire for small businesses and their employees,” she said. “Overreaching multistate executive orders could be the end to the road for those who are barely holding on, especially hard-hit businesses that already face ongoing, rigid restrictions in our state.”

N.J. has the 14th-most health care workers per capita in the...