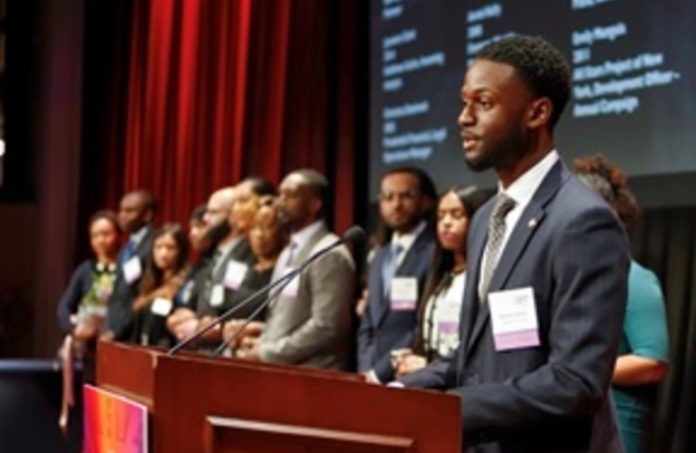 In 2011, Wadnes Castelly was a graduate of the All Stars Project — a national nonprofit organization that sponsors innovative afterschool development programs for inner-city youth.

On Monday, he was elected to sit on its board of directors.

Gabrielle Kurlander, the CEO of ASP, said Castelly will help the group in many ways.

“We are proud to have Wadnes on our national board,” she said. “His contributions as an alumni leader who has gone through our performance-based, after-school development programs will help the All Stars further innovate our youth engagement strategies.

“Additionally, Wadnes’ expertise in social and digital media will be very valuable as we expand our impact across the country.”

Castelly, a first-generation Haitian American whose family moved from Newark to Irvington when he was a child, said he is grateful for the help the program gave him as he grew up — and became aware of the lack of resources in the township, especially for education, compared with more affluent communities.

When he was 17, rather than continuing to play football for the high school team, Castelly opted to sign up for the All Stars Project of New Jersey‘s Development School for Youth program. He had become intrigued by DSY through his older sister, Jessica, who was in the program years prior. He went on to graduate from Rutgers Business School in 2016 and now works at Spotify.

At 26, Castelly is the youngest member of the board.

“I am honored and excited to be a member of the board of directors for the All Stars Project,” he said. “As a young person born in Newark to Haitian parents, I didn’t have a linear pathway to Corporate America. I’m grateful to the All Stars Project’s investment in me that helped position me to be where I am today. Now, it’s time for me to pay it forward and share my perspective and insights to develop ideas to grow the All Stars Project and equip young people with the skills needed to thrive in the digital and technology era.”

As part of his DSY experience, Castelly earned a paid summer internship with AIG in Lower Manhattan, where he felt welcomed and learned firsthand many of the skills needed to be successful in a professional business setting. Skills he later used in marketing internships he had during his college years at Rutgers Business School with the Brooklyn Nets/Barclays Center and Showtime, and later as an employee at HYPEBEAST and the New York Times.

Now, after more than a year at Spotify, he said he is continuing to advance his career at the intersection of four things that excite him: marketing, technology, business and philanthropy.

Maria Morris, chair of the ASP board of directors, said Castelly already has proven to be a strong fit.

“We have already benefited from Wadnes’ strong spirit of service and commitment to initiatives that support the advancement of marginalized communities,” she said. “Wadnes has remained active with the All Stars since he was in our Development School for Youth program, and, as chair of the Alumni Leadership Council, we’ve seen his leadership abilities through his work to mobilize thousands of young people who have participated in our programs.

“We are grateful for his involvement and know he will help us in our work to transform people’s lives.”

The All Stars Project is a national nonprofit organization founded in 1981 that sponsors after-school development programs to help thousands of inner-city youth and their families each year. Its mission is to transform the lives of youth and poor communities using the developmental power of performance in partnership with caring adults. Headquartered in New York City, ASP operates in six cities — Newark and Jersey City, New York, Chicago, Dallas and San Francisco.

ASP is an action and thought leader in the field of after-school development — evidence-based practices that focus on after-school activities as a new way of engaging poverty — and is connecting with and influencing leading-edge thinkers, researchers and institutions in the fields of youth and community development.

Felician University announces new chairman of the board