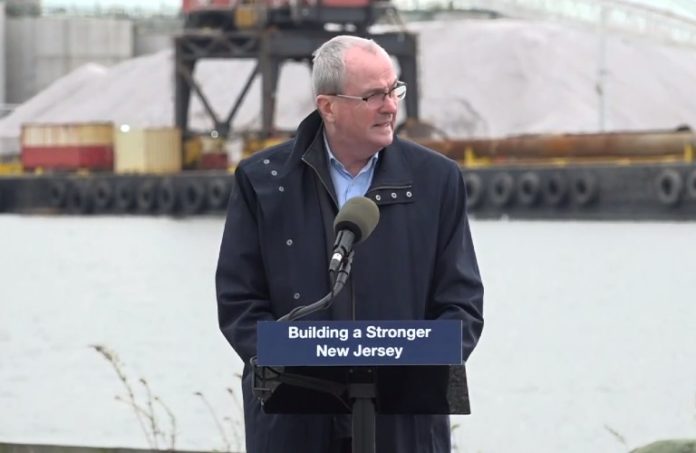 The planned projects included a $500 million replacement of the Route 7/Wittpenn Bridge, as well as a Route 22 Chestnut Street Bridge project and a Route 27/Dehart Place resurfacing. (More info below.)

“These critical projects will further enhance regional operations and contribute to a stronger, more modern infrastructure that will both deliver safer roads and bridges, as well as fuel our state’s economic recovery — not just as we work toward the end of the pandemic, but for decades to come,” Murphy said. “In doing so, the jobs here at the Port, and the jobs created by the infrastructure projects around us will help ensure a stronger, fairer and more resilient post-COVID economy.”

The Port of New Jersey and New York is comprised of facilities in both states, serving more than 134 million people regionally. Roughly 500,000 jobs are supported by Port activities, which generate billions of dollars in economic activity each year.

The port is an economic driver not only for New Jersey, but the entire region. Based on record-breaking total cargo volumes in 2019, it is now the busiest port on the East Coast and the second-busiest port in the nation.

Port Authority Chairman Kevin O’Toole said the projects will be a big help.

“The Port of New York and New Jersey supports tens of thousands of direct and indirect jobs in the region and generates billions in personal income, business activity and government tax revenue each year, which is why the success of the seaport is tied directly to the economic recovery of this region,” he said. “The seaport is moving record levels of cargo, and investments in regional infrastructure will be critical to ensuring that even more of these goods, commerce and jobs flowing through the port keep coming to the region.”

Here’s a greater look at each project:

The improvements within this project will strengthen access to and between the Newark-Elizabeth Air/Seaport Complex, intermodal rail facilities, trucking and warehousing/transfer facilities, and the regional surface transportation system. These facilities and their access routes are the front door to global and domestic commerce for New Jersey and the greater metropolitan New York region.

The new, wider vertical lift bridge doubles the vertical clearance over Hackensack River from 35 feet to 70 feet, resulting in fewer openings and less congestion. When the new bridge opens this spring, it will improve safety, alleviate congestion and reduce the number of bridge openings by 70%.

The original bridge was built in 1929 and it carries four lanes of traffic. This bridge — which runs east to Newark Liberty International Airport/Port Newark — is considered structurally deficient and functionally obsolete. The current bridge will be replaced with single span. Once complete, it will enhance safety of the motoring public on Chestnut Street. The new bridge will also provide shoulders for safer movement.

Route 27/Dehart Place: Located less than three miles west of Newark airport and less than five miles from the Port, this milling and roadway resurfacing project is designed to also enhance safety for pedestrians in the adjacent community as port activity continues to increase.

Gutierrez-Scaccetti said the DOT has invested hundreds of millions of dollars in advancing projects in the port district that directly and indirectly support the efficient movement of goods.

“The investment in these Portway projects today ensures our road and bridge network will be able to handle the intermodal freight needs of the future in a safe and efficient manner,” she said.

Baraka stressed that Newark’s seaport is central to the city’s economy.

“Maintaining its infrastructure is critical to ensuring its efficiency and effectiveness,” he said. “These investments being announced today will have a long-term positive impact on port operations and help create a safer, stronger, and more equitable Newark.”