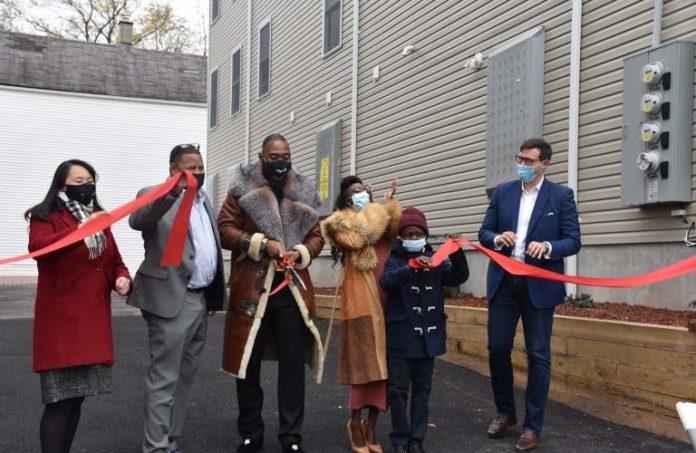 So, on a day when he and his partner at Ascension Capital Partners, Ryan Curran, cut the ribbon on the Lofts at Avon — two new, affordable three-family homes on former city-owned vacant lots in Newark’s South Ward — it was time for reflection.

“It’s a special day,” he told ROI-NJ. “Because, when you start these projects, even before you buy the land and get your development team together, there’s always a little fear there — can you actually pull this off and get it done?”

“To get to the finish line when we’ve been dealing with COVID is incredible,” he said. “It’s such a process. Going through the planning approval process, hiring the right professionals — firing the right professionals, hiring contractors — firing contractors, dealing with funding issues that you always have — and then COVID hits.

“And then, whenever the governor issued an executive order, we had to sit there reading through it to make sure that we were allowed to build it. The fact that we were building affordable housing was kind of our saving grace, because it allowed us to continue through the pandemic.

The day represented another milestone moment for Mayor Ras Baraka and his plan to create more affordable housing in Newark.

“Affordable housing is a central issue and primary focus of my administration,” Baraka said. “Affordable development like the Lofts at Avon make the American dream of homeownership a reality for more Newark residents.

“The developer, Siree Morris, himself represents the American dream. He is a Newark native who has now returned to his birthplace to give back and pay it forward, to help us create a more equitable, collaborative and empowered Newark.”

The two new structures will offer their residents three-bedroom units with two bathrooms each and stainless-steel appliances. And a rooftop deck.

The partners purchased the land from the city in 2017.

Deputy Mayor Allison Ladd, the director of economic and housing development in the city, said expanding the city’s housing options — and expanding the pool of developers eager to do the work — are essential to moving forward.

“Development outside of downtown will be driven by new developers such as Siree Morris, local residents dedicated to the rebirth of old neighborhoods working in partnership with Newark’s targeted low-cost land sales and equipped with tools and knowledge learned through from our small contractor/developer initiatives,” she said.

It takes more than that, Morris said.

“To break into the development piece of real estate was kind of a miracle,” he said. “It took me a lot of years just to get to this point when I can start developing and be developing multiple projects.”

Morris had training. Lots of it.

He graduated from Rutgers University-New Brunswick with a degree in civil engineering. He then learned what he didn’t know on his first job, working for Jack Morris at Edgewood Properties.

“I learned so much,” he said. “I was designing commercial centers, townhome developments with a golf course. It opened my mind to the possibilities outside of just buying a property, renovating it, and then leasing it or selling it and doing it again.

“I was able to see land development, as opposed to what everybody else in the market was seeing, which were flips.”

“Breaking into the industry is very difficult, especially being a young Black male with no resources, no money, no aunts or uncles, mothers or fathers, grandmothers or grandfathers with life savings I can use,” he said. “It was just me, bootstrapping and hustling.”

Finding a bank helps, too.

Morris is honest about the biggest hurdle facing those who want to become developers.

“These are high barriers to entry. I was fortunate to be able to find somebody who shared the same vision, someone with a little equity and assets. And I found a bank that wanted to finance projects and we were able to put the deal together.

“I kind of got here by the grace of God.”

And with the help of New Jersey Community Capital. Morris rattles off all the people that gave him a hand.

“They gave me my first shot and have supported me. We’re going strong on five years. They have been a tremendous blessing to my professional life and personal life.”

Morris, 38, and his wife, Ayana Morris, have two kids. He and Ayana are the creators of the unique Newark Moonlight Cinema, the pop-up drive-in theater celebrating Black actors and filmmakers that has been drawing crowds to the site of the former Newark Bears’ Riverfront Stadium.

Morris sees the drive-in theater as a way to give back. He feels the same way about his role as a developer.

“It’s very difficult, but one of the reasons why I’m doing this is to create a lane so that the people that come behind me, who look like me, can have an easier path,” he said. “I want to lower the barrier of entry.”

Morris has some advice for anyone who wants to do just that.

“If somebody walked by and wanted to do what I’m doing, I would tell them to do their research,” he said. “There are two parts with development. You have to educate yourself about the actual building and the planning and going to the zoning board and things like that.

“But, you really have to educate yourself about the banking process. Reach out to local banks and ask them what it would take to get a loan. Get the loan application and look at what’s needed.”

Then it’s a matter of building a network.

“Tell everybody you know — and everybody you don’t know — what you are trying to do,” he said. “Go on Facebook, on Instagram on whatever. You need to start meeting people, the professionals that can help get you from Point A to Point B.”

“This is a very important milestone in my career,” Morris said. “It is important for me to be an example for my community. I want us to act on the endless opportunities and influence that real estate affords. The only way to preserve our community is to own it.”

For Republican leader Palatucci, an honest reflection on Jan. 6 —...