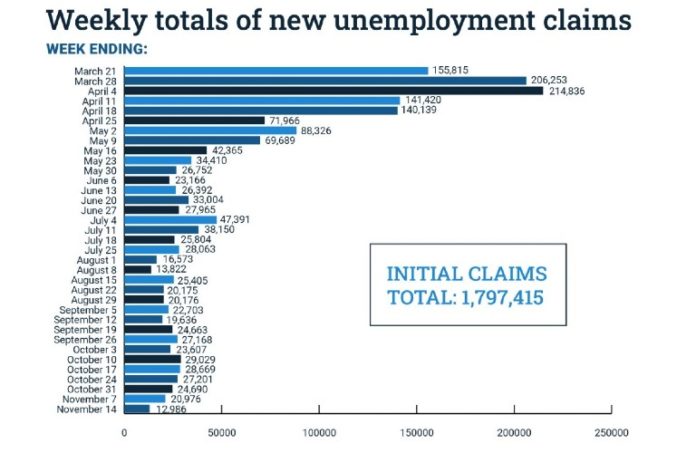 Overall, employment slipped for the month, as shrinking payrolls in the public sector outweighed gains in the private sector. The state lost 18,000 public-sector jobs for October, while it added only 12,800 private-sector positions. The gains spelled the sixth straight months of private-sector job growth, the state noted.

In an analysis for the Garden State Initiative think tank, Charles Steindel, a former New Jersey chief economist and current resident scholar, Anisfield School of Business at Ramapo College, said: “After a string of unprecedentedly strong gains, New Jersey’s labor market frayed in October. The job count fell 5,200, after rising 481,500 from April to September. Job losses were, however, concentrated in the public sector, which saw an 18,000 decline. The details of the government losses are not yet available, but certainly the end of temporary Census jobs played a part. …

“The details muddle the full story: The rise in private-sector jobs being offset by the government contraction; the unemployment rate increase resulting from the surge in the labor force — which could be a positive sign: people may be becoming more optimistic about finding jobs. However, the bottom line seems clear enough: The rather headlong recovery we had been seeing in our job market has been arrested — hopefully, only briefly.”

The state gained a revised total of 74,100 jobs in September, a number that jumped 13,900 from the preliminary estimate of 60,200 jobs gained. The September unemployment rate was 6.7%.

In another announcement, the DOL noted it has now distributed nearly $1.3 billion in FEMA unemployment benefits to 817,000 workers, and is preparing to issue another round of $1,800 payments — representing $300 a week for a six-week period — to claimants next week.

FDU Poll: Nearly 1 in 5 would choose to always work...