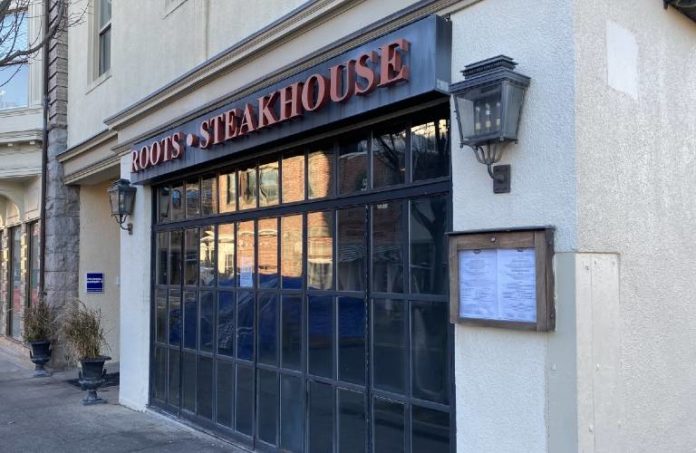 By last Wednesday morning — three days after his first employee had tested positive for COVID-19, hours after the second had done so and after he had seen the fruitless nature of contact tracing — restaurateur Chip Grabowski decided he needed to close the Summit location of Roots, his famed steakhouse.

It wasn’t an easy decision. And it wasn’t something the local health department asked — or even encouraged — him to do. In fact, health officials said he could stay open. But it was something he felt he needed to do for the safety of all. It was sign of things to come.

By the end of last week, COVID cases had been found in five of the other 13 restaurants in the Harvest Restaurant Group. It led to the closure of Huntley Tavern in Summit, Addams Tavern in Westfield, Tabor Road Tavern in Morris Plains and the Roots locations in Morristown and Ridgewood.

Grabowski, who has kept four of his restaurants closed since the start of the pandemic, is down to just four open restaurants as the second surge hits the state, colder weather makes outdoor dining impractical and the state’s new restriction on bar seating cuts into his biggest profit area.

Rents, salaries, insurance costs and other overhead costs are starting to pile up. As are food costs — as in the food he has purchased that he no longer can sell. He has met repeatedly with health officials and consulted with a renowned infectious disease specialist on how he can safely operate the restaurants he has left and eventually reopen the others.

Grabowski, however, is not sure if any of this will work.

For all the talk about indoor dining, capacity, hours of operation and bar sales, Grabowski’s experience illustrates the great unknown that threatens to crush the restaurant industry even more: It’s nearly impossible to stop the spread of COVID-19 once it enters your establishment.

“The guidelines, as they relate to our industry, are difficult to manage,” he said. “They said any employee that has worked within 6 feet of another employee for a total of 15 minutes during a shift has to quarantine. Now, it’s dropped to 10 minutes.

“So, think about it. That’s everyone. How could you manage an individual over a long shift — whether they are a hostess or a bartender or a server or someone in the kitchen — and not have them be in close contact for 10 minutes with another employee?”

To be clear, Grabowski is not in any way fighting against the guidelines. He just has come to the realization that they may make the industry untenable.

“I’ll share with you our strategy, but I don’t know if this can be effectively battled,” he said. “I am here to tell you, as a professional in the restaurant industry, I don’t know if it works.

“I think we’ve established a fairly good reputation in our industry over 25 years. And I want our people and our customers to know we’re reacting and being proactive. But, really, at the end of the day, I don’t know how long we can last because of what’s ahead of us.

“Those are the conversations I have with myself at 1 in the morning.”

Unfortunately for Grabowski, even more damaging conversations are happening elsewhere.

Grabowski thought he had seen the low point of the pandemic.

Having a call in the spring when he had to tell all but about 50 of his 1,100 employees that the restaurants were closing and they were being laid off was tough.

“It was one of the most emotional days of my life,” he said.

Then, there was a sprinkler malfunction in a condo a few floors above his Urban Table location in Morristown. By the time the water was turned off, his restaurant — and many of the condos above it — were ruined.

“It totally wiped out the entire restaurant,” he said. “We had to gut the whole place.”

But the worst moment came last week. At a time he said he was meeting with experts to figure out a path forward — a time he was proactively closing restaurants for safety (while continuing to pay his employees) — one employee went on social media and attacked the company.

“It was very disheartening and disturbing to me for this person to specifically call me out personally and say what he said on Facebook and social media,” he said. “They took an aggressive stance, saying please pass this forward and hashtags and all those things.

“I’ve never been on Facebook in my life. It’s just not what I am, so I have no idea how it works, but they really took this to another level and created for me, as I stand here today, more difficulties.”

Grabowski said the attack was stunning because of how much he said he has been doing.

When he furlough more than 1,000 employees, Grabowski also announced that he not only would continue the health insurance for the 150 or so employees on the plan, but he would pay the entirety of the premium, which he did through August.

“We felt that we were in a period of unprecedented adversity,” he said. “This was a time that people and organizations needed to step forward. Harvest did that.”

Grabowski said that, when he started bringing employees back during the summer, he recognized that many would make more on unemployment — especially with the $600 bonus payment. He said Harvest made the decision to match that payment.

“We knew we weren’t going to be as busy as we were before — and we knew they would not remotely make what they made on unemployment with the $600 booster — so, I made a promise to every single employee that came back that they would make, at least, if not more, the money that they were making with that $600 booster.

“I think it was unheard of in our industry, but that’s what Harvest did.”

That didn’t show up on social media.

“For this person to say what they said, when I think of what we have done as an organization and the proactive steps we’ve taken, it really stings me,” he said.

Here’s the most incredible part of the story. This summer, at a time when the industry was collapsing across the country, some Harvest restaurants actually were up year-to-year. It’s crazy, but true.

The Roots location in Summit is one example.

When the city closed the road in front of the restaurant to create more outdoor dining space, Grabowski said he was able to put up 20 tables. He only had 28 inside. When indoor dining was allowed, even at 25% capacity, he could exceed his pre-pandemic seating. And there was an increase in takeout, too.

The top locations were up 25%, he said. The weakest — and this was mostly determined by the availability of outdoor seating — were doing 60% of their business from the year before.

Business, of course, was down overall. Only approximately 750 employees were recalled. And four locations never reopened. Those were restaurants that were more dependent on corporate clientele or those next to other brands in the chain. Grabowski said he would open one of the two — then use the outdoor seating that was available for both.

The chain had pivoted the best it could, Grabowski said.

“To see us come back full circle, have record weeks a few weeks ago, and then all the sudden, ‘Bam,’ get hit in the face with this — it’s been a little bit of a roller coaster,” he said.

There is a plan going forward. Grabowski has met with a renowned infectious disease specialist. No officials felt it was necessary to close the restaurants.

Grabowski, however, feels he made the right call to do so. And he feels he has a plan in place to reopen them, starting with Addams Tavern, which may reopen this weekend. All of the employees will be tested en masse at each restaurant — something he pledges to do on a continual basis until there is a vaccine.

“Maybe we can stop any potential outbreaks before they multiply quickly,” he said.

He already has instituted the practice of taking the temperatures of customers — as well as asking them the standard four-question assessment. It’s a way to bring a sense of confidence, Grabowski said.

“I want our guests to know that we’re acting in the best way that we can as relates to their safety — as well as trying to create a sense of normalcy,” he said. “We want to create an environment where people can continue to go out, socialize and not feel that they’re in this middle of this pandemic.”

The fact remains: We are.

There have been promising results from vaccine tests, but even the best-guess estimate is that vaccinations could not possibly reach wide-scale distribution until next summer.

Until then, Grabowski has to move forward. He even has a new concept picked out for the ruined Urban Table location in Morristown.

So, it’s increased safety procedures — all while wondering if this is an untenable situation.

“It’s all part of this process of how Harvest is going to behave moving forward,” he said. “But I really don’t know how much it will help. This type of thing may be inevitable in our industry.”