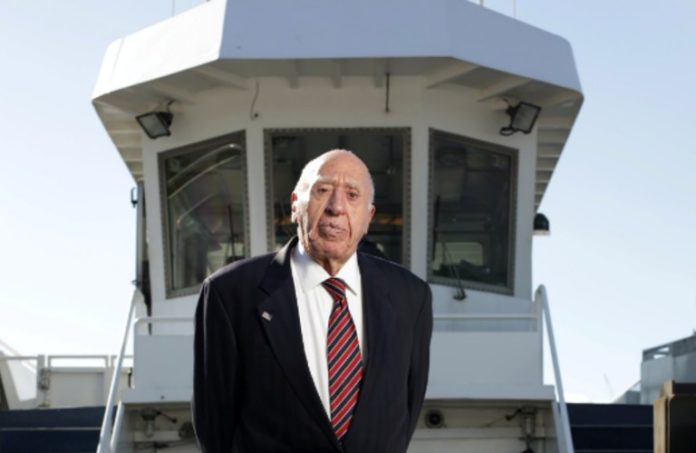 When entrepreneur Arthur Imperatore Sr. announced in 1986 that he was going to create a commuter ferry that served passengers from Weehawken to Pier 78 in New York City, he was laughed at.

“Arthur’s Folly,” it was called by critics.

Imperatore got the last laugh. His vision turned into New York Waterway, a much-needed company of great influence that played a tremendous role in the growth of the Gold Coast.

New York Waterway also played a vital role in the most tragic day of the region’s history: 9/11. His ferries helped transport approximately 150,000 people after the terrorist attacks on the World Trade Center shut down rail and car travel.

Imperatore is credited with creating a model of combining bus service and ferry service. It is estimated that New York Waterway has sailed approximately 300 million people across the Hudson River.

Arthur E. Imperatore, Sr., Founder & President of NY Waterway leaves us, but his memory will last forever in our hearts. Legends never die. Thanks for everything Maestro.
~Your Staff at NY Waterway ~ pic.twitter.com/haOlVTJXuV

“All of us at NJ Transit mourn the loss of Arthur Imperatore Sr., a true pioneer in the transportation industry and a great friend to mass transit,” Corbett said. “His unparalleled vision allowed him to build NY Waterway into an integral part of the region’s transportation network.”

“Arthur Imperatore embodied the American dream, creating a ferry company from humble beginnings through hard work, dedication and a mission to improve the lives of other people,” he said. “His company has played a major role in revitalizing coastal cities like Hoboken for decades. My deepest condolences go out to the Imperatore family for their loss.”

Imperatore’s business legacy is more than just the ferry. His business ventures included efforts in real estate, mining, trucking — and even as the owner of a professional sports team.

Imperatore was the first man who wanted to move the NHL’s then-Colorado Rockies to New Jersey. He bought the team in 1978 with the intention of moving it to the Meadowlands Arena, which was under construction.

Local opposition — and influence from the league — forced Imperatore to sell the team to Peter Gilbert in 1981. A year later, Gilbert sold the team to John McMullen, who moved it to New Jersey for the 1982-83 season and renamed it the Devils.

“Arthur E. Imperatore, Sr., Founder & President of NY Waterway leaves us, but his memory will last forever in our hearts. Legends never die. Thanks for everything Maestro. ~Your Staff at NY Waterway”

Many knew him personally, as Imperatore never stopped working, even after he passed 90 years of age. He considered his work his greatest legacy.

When asked about his greatest success in a 2018 profile by New Jersey Advance Media, Imperatore was straight to the point.

“The fact that I’m still in business,” he said. “As far as the future goes, I plan on living because I still enjoy coming to work every day. I get my ride to the office, I get revived and I get to business.”