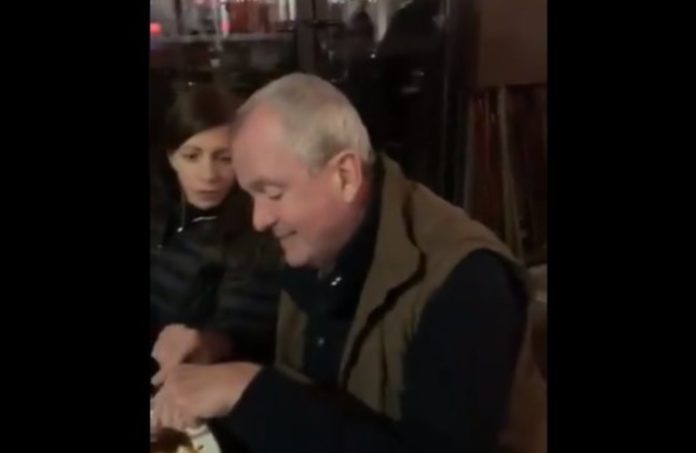 Gov. Phil Murphy got right to the point about the now-viral video of him, first lady Tammy Murphy and their four kids getting screamed at by an apparently drunk patron at a Red Bank restaurant Saturday night.

“I’m a big boy, I have thick skin,” he said. “It doesn’t impact me at all, and I think I can say the same thing for my wife. I will say this, though: Our kids are not a part of that. That’s one observation. … Let’s leave my family out of this.”

In the video, two unidentified women walk up to the family and badger them for being hypocrites by not wearing masks. The Murphys were eating when the incident occurred, which is why they were maskless. After the women exchange a few verbal jabs back and forth with Murphy’s son, a restaurant employee comes over and asks them to leave.

The video, which is filled with profane language, can be found here, among other places on the internet. Many of the questions Murphy received on the incident during his Monday press briefing were about his security team and why they did not seem to intervene in the incident. The governor decided to remain silent on this and instead chose to praise his security detail.

“We’re not going to comment on security,” he said. “I’m incredibly humbled and honored to be spending every day of my life with the extraordinary representatives of the New Jersey State Police. They’re as good as they can be.”

In terms of why this incident might have occurred, Murphy thinks it’s hard to say, but he does not blame the hecklers. He knows the extraordinary stress this virus has placed on everyone and, while he questions their methods, he understands the concerns of these two women.

“This is a nation that has been ravished and torn in two,” Murphy said. “We’re going through a once-in-a-century pandemic, economic hardships unlike anything we’ve faced … and, on top of that, the national moment of reckoning coming face to face with the stain of racism, there’s a lot of moving parts right now. I think we should err on the side of giving people the benefit of the doubt.”

Woman interrupts NJ Governor Phil Murphy’s dinner to cuss him out. from r/PublicFreakout