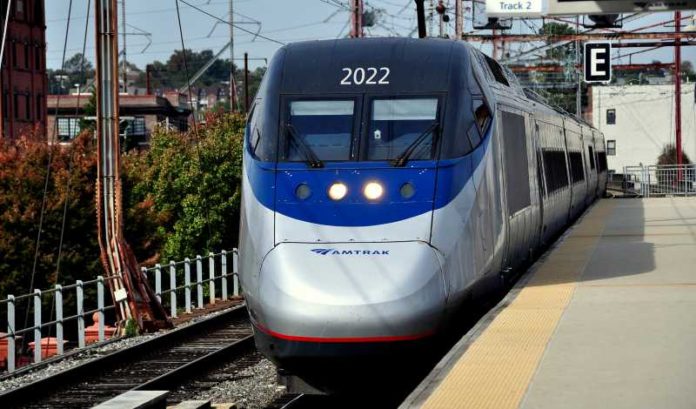 It’s easy to rattle off all the ways Amtrak can help restore and rebuild the economy along the Northeast Corridor.

Chairman Tony Coscia said investments are not only good for producing jobs, but they will go a long way to improve safety and reliability.

“We have identified for Congress over $5 billion of additional investments that we think will play a critical role in allowing Amtrak to realize the potential that it has as a contributor to the nation’s transportation system,” Coscia said. “And, as a result of that, it will be a significant contributor to the important recovery effort that we know will follow this pandemic. And we believe it will be responsible for participating in the creation of thousands of jobs in that process.”

“As we look to the future, sustainability remains of utmost importance, and we believe that an expanded Amtrak service is essential to decarbonizing our transportation network, which generates roughly 28% of U.S. annual carbon emissions,” he said. “Cars and trucks are responsible for nearly 82% of those emissions. We need passenger rail alternatives throughout the nation. As we enter our 50th year of service, we stand ready to play an important role in helping our nation recover and grow for the future.”

Amtrak Senior Executive Vice President Stephen Gardner then offered this: There’s never been a better time to invest — because Amtrak can get any capital improvement work done faster due to the drop in use.

Gardner said a recent tunnel project in Baltimore took months — instead of years — to complete.

“With reduced levels of trains and passengers, we can get more work accomplished,” he said. “So, it’s a great time to invest. We can do the work efficiently, keep people working and make investments that will allow us to recover and provide even better service when we’re through the pandemic.”

There’s just one problem: money. Everyone needs it.

The Amtrak officials stated their case on their annual fiscal year-end call. Some of the numbers were as bad as you might expect.

Ridership, which dropped almost overnight by 97%, is only back up to 25% of pre-pandemic levels. Coscia said it’s forecast to be no greater than 37% for the rest of fiscal year 2021.

Amtrak provided for 16.8 million customer trips in fiscal year 2020 — that’s a year-over-year decrease of over 15 million passengers. And that comes despite the fact Amtrak was seeing record ridership in the first six months of the year.

Coscia said operating earnings will result in a just over $800 million operating loss for the year — on a total operating revenue of $2.3 billion, which represents a nearly 32% decrease from fiscal year 2019.

Coscia and his team are hopeful, though. And there are some things to be hopeful about.

For one, the leadership team and mission has been rebuilt in recent years. Had the pandemic not hit, Amtrak was on pace to have a break-even year while making record capital investment.

Coscia said the team that led Amtrak to that moment is one to bet on going forward.

“At the start of the year, it was clear that our enhancements were working, our customers were giving us very strong, direct feedback,” he said. “And, in many ways, I think all the work that was done at Amtrak in the timeframe preceding the pandemic put the company in the position to be strong enough to deal with the historic challenge that we faced.”

Amtrak, like so many others, has had a large number of furloughs — with thousands more workers facing a similar fate.

“As we turn our attention to fiscal year 2021, we now anticipate needing up to $4.9 billion in funding to support the company and our employees through this unprecedented situation,” he said. “A critical component of the loss of ridership that we’ve experienced over these past eight months is indeed the loss of revenue and the significant impact that it had on our company.

“Currently, we’ve had to additionally update our capital and operating plans as a result of the current short-term continuing resolution that’s in place and is right now going to expire in a few weeks. So, our goal now is to minimize further impact on our customers and employees. However, if the level of funding is extended beyond December of 2020, and supplemental funding isn’t provided, we’re going to be unable to avoid taking further difficult actions that could have longer lasting effects on our Northeast Corridor infrastructure, and the National Rail system.”

Amtrak certainly feels it can count on support from Biden, who may be its most famous passenger, having used Amtrak for years to commute to D.C. from Delaware.