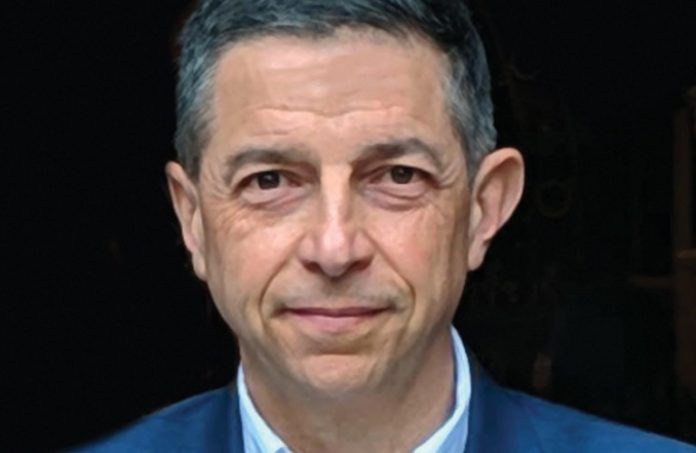 There’s a small facility in Cedar Knolls that’s going to be crucial in testing a possible solution to an outsized problem: The almost 1 million total knee replacement surgeries performed each year at hospitals in the United States.

The New Jersey Regenerative Institute was the only health care facility in the entire Northeast chosen to run a late-stage clinical trial that could determine whether a minimally invasive cellular therapy could be used to delay or altogether avoid these surgeries.

The research rests on a technology platform developed by GID BIO. The Colorado-based biotech company’s platform isolates parts of a patient’s own fat, or adipose tissue, and harnesses the potential healing properties in those cells when used as a concentrated implant.

Here’s the upshot: Knee problems are not just the burden of those in their 70s or 80s anymore.

Dr. Gerry Malanga, a board-certified physician at New Jersey Regenerative Institute, a practice specializing in regenerative medicine for sports, spine and orthopedic injuries, said knee osteoarthritis is becoming increasingly common among those in their 40s and 50s. And, in those younger populations, the outcomes of knee replacements are not so good.

“(But) if you could hold off someone in their late 40s from needing (a replacement) until they’re in their mid-60s, you’ve done a great service to everyone involved,” Malanga said. “If we can find an intervention that’s robust, short of a knee replacement, that’s desirable on many levels.”

When it comes to counting the ways it might be beneficial, Malanga starts with the epidemic that raged long before the current pandemic — the opioid crisis.

A talking point across the country has been the rising rates of opioid overdoses. According to a survey published in the medical journal BMJ Open, the strength of the average opioid prescription for outpatient knee surgery in the United States is at a level that has been linked to an increased risk of overdose death.

Malanga said he’s seen studies indicating that as many as 15% of patients are still on opioids three months after their total knee replacement surgeries.

“If you have that same figure each year for every patient undergoing this surgery, you’d have about 100,000 people every year requiring opiates, and, in five years, you’ve got half a million people on opiates,” he said. “With all the normal side effects of sedation, constipation, not being as sharp, comes the potential those (opiates) are misused not only by the patient, but also those around them.”

Then, there’s the matter of how much knee replacements cost, which Malanga estimates usually come with an upfront price tag of about $40,000 to $50,000.

Behind that figure are the more abstract costs incurred by the economy, especially when you take into account the rehabilitation and physical therapy involved in the surgeries. Those who undergo the operation are out of work for some time, and it can put people in physically demanding jobs out of work indefinitely.

Having those costly total knee replacements halted by a less-than-two-hour procedure would be a clear change in the treatment paradigm, Malanga said.

“We’d also have a shifting of surgical cost figures and a significant bend in the cost curve in orthopedic spend, which makes up 2 to 5% of our GDP,” he said.

That’s right — he’s talking in terms of the nation’s gross domestic product. That’s the size and scope of the problem.

According to various reports, the country’s health care spending has outpaced economic growth and has stood at about a fifth of the national GDP.  An American Journal of Orthopedics review noted that, although orthopedic surgeons only comprise 2.6% of all physicians, the diseases they treat account for 5% of the national GDP.

Health care market research firm iData Research reported that there were more than 966,000 knee replacement surgeries in the United States in 2017. Within 10 years, share of these surgeries is only projected to increase — potentially reaching 3.5 million procedures per year, according to the American Academy of Orthopaedic Surgeons.

About half of the country’s adults will develop knee osteoarthritis in at least one knee in their lifetime, according to the same organization. The knee implants someone may need to fix it can last an individual about two decades.

“But, a certain number of knee replacements, after they’re done — let’s say they’re successful — will wear out in anywhere from 5 to 10 years,” Malanga said. “Those revision knee replacements are much more difficult, have much lower outcomes and cost a lot more.”

Along with everything else, knee replacements have to be done in hospital settings — opening these patients up to the further concern of potential COVID-19 transmission.

Incidentally, Malanga said components of adipose tissue are potential immune-modulatory and anti-inflammatory agents. The Richard King Mellon Foundation recently funded GID BIO with a grant that will allow it to evaluate cellular therapy’s role in COVID-19 on a small number of patients.

Malanga added that such treatments are very theoretical and have to be cautiously applied.

“GID BIO does a good job of ensuring that,” he said. “I’ve found them a very thoughtful company that wants to do things the right way — that is, in conjunction with the FDA, not skirting them as some other organizations do.”

The FDA has in various statements expressed some concern about safety with the widespread use of therapies involving subsets of adipose cells, particularly if they’re altered in any way.

Malanga said the early clinical evidence for the FDA-compliant Phase III clinical trial that his New Jersey Regenerative Institute will be involved with has made this particular application of cellular therapy appear to be “extraordinarily safe.” It also could be effective, he added, as 82% of patients saw an 80% improvement in their condition in these initial studies.

If the clinical trial is successful, this cellular therapy could become the first FDA-approved cellular medicine intended to treat pain and function associated with knee osteoarthritis.

Many things in medicine (or in life) are a win-lose, Malanga said.

“This, however, is a win-win-win,” he said. “It’s a win for patients, clinicians and for economies. So, given the prior results, I’m excited about what might happen in the future with this final well-done study.”