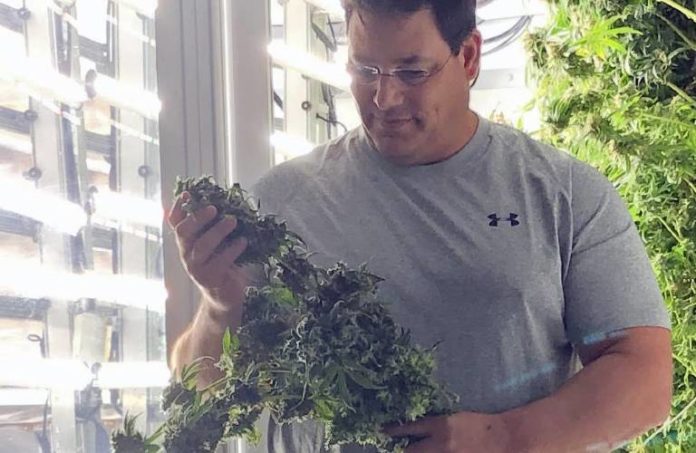 Deep down, George Irwin feels like the kid he was 40 years ago. You could catch him most weekends mowing the lawns of his Garden State neighbors … but, even then, he’d rather have been the one running the company that hired people to do it.

And he still wants to be on top.

In the new and innovation-hungry cannabis sector, Irwin looks poised to do just that. He’s head of multiple companies that are all centered around a patented “living wall” plant growth system, which allows for plants to be grown vertically, on walls and roofs — plants such as what’s hoped to be New Jersey’s next cash crop.

The Atlantic City-based GLTCannabis is a promising application of the vertical horticulture system pioneered two decades ago by Irwin’s company, Green Living Technologies International. That company’s vertical gardens, after years of garnering attention for its use in projects such the Minnesota Twins’ baseball stadium, is something Irwin now sees as having the possibility to revolutionize the medical (and soon, in New Jersey, recreational) marijuana industry.

Compared with typical horizontal planting techniques, Irwin said the GLTCannabis Vertical Cultivation System, the only system of its kind in the world, has about 10 times the production capacity. At the same time, it has the potential of reducing energy needs, lowering costs of goods and improving the environmental footprint of cannabis growers.

The longtime New Jersey entrepreneur is excited about it … even if climbing to the top of this new industry wasn’t something Irwin ever expected to do.

His passion was in agriculture, not pot. But, he said, at the same time that he was just starting to explore what was involved in cannabis crops, he became the unfortunate parent of a child with Hodgkin’s lymphoma.

“When my son was diagnosed with cancer, I knew enough about these cannabis products to provide my son the specific oils that would allegedly help cancer patients,” he said. “It’s not some sales pitch; it’s not a miracle. But, for us, what it did for my son was life-changing.”

With Irwin’s son being declared cancer-free sooner than anticipated, the local entrepreneur took a more-than-expected interest in the science behind medical marijuana.

What he saw was a lot of potential in an area of agriculture that had barely started to go legitimate.

“I consider myself part of the second generation of legalized cultivators,” Irwin said. “From my perspective, the first generation was, frankly, made up of those who were once illegal growers. Where else were you going to acquire experience and knowledge without going to the black market?”

The nascent status of the industry means cannabis growing still involves a lot of waste, from Irwin’s perspective. The reduction of that waste is part of his goal of professionalizing the industry.

He explained that rockwool, one of the most popular materials for the indoor hydroponics growing systems used by cannabis cultivators, when combined with synthetic fertilizer, could be leeching potentially carcinogenic chemicals into waterways with the massive amount of it that’s regularly discarded into landfills.

When marijuana growers had less of a public relations challenge and more of a law enforcement one, that might’ve been less of a problem.

“But, how can the cannabis industry now help treat a disease with techniques that might be risking causing disease?” Irwin said. “(The industry) has to get away from the old way of doing things and has to think about the science. That’s what we’re doing. We’ve found a way to use compost-based bio-soil, and allow 100% of our waste to be reused.”

From a business angle, Irwin makes a good case for his living wall system. The use of walls allows much higher growth capabilities in a smaller space than typical grow operations. That’s a byproduct of being able to measure production in cubic feet instead of square feet.

The company also wants to ensure that its medicinal marijuana product is providing the same dose of THC day in and day out. So, it has a team of plant scientists working on isolating plant tissues that guarantee consistency from one plant to the next, while also keeping those plants disease- and virus-free.

It’s all part of bringing more innovation to the table, Irwin said.

“We can even take a basil plant and infuse it with THC,” he said. “It’s somewhat Frankenstein-ish, but that’s the reality of where this industry is going.”

New Jersey voters passing the referendum that could allow adult recreational use of marijuana opens the door for more local opportunities for this company, but, with that process still playing out, the company is mostly focused on the medical side, and not just in the Garden State. The company’s Maine-based subsidiary, VertiKal Tech, received a medicinal cannabis license there this year and is set to be one of the state’s largest cannabis producers.

Irwin said his company does plan on producing enough cannabis for the wholesale market here and elsewhere, and is even exploring the launch of a local retail operation.

The way he looks at his company’s vertical greenery … the sky’s the limit.

“We feel we’re part of the history of cannabis in New Jersey, and we’re very excited to be part of it,” he said. “We need to help create the tax revenues that can help put the state right back on its feet.”