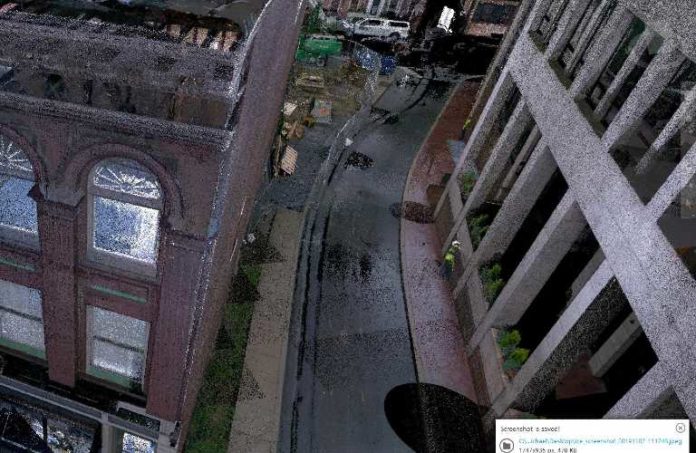 The Williamstown-based architect Richard Sanford is a sole practitioner who competes for business with firms with half a dozen people or more.

He was at one time embarrassed about it; he said he felt like it appeared that he had to “fake it until he made it.”

He’s not embarrassed to tell people today in real estate that, yes, it’s just him. Because, although he might not say it outright, it’s a lot more embarrassing to do business in the industry as it was done more than two decades ago than it is to be on the cutting-edge.

Sanford, who hosts his own podcast, “Rich the Architect,” gets away with doing more with less because he’s using technology that was unimaginable at one time: highly accurate three-dimensional scanning with laser tools, and photogrammetry, the science of making measurements from photographs.

“The easiest example of 3D scanning and capturing a built environment is what people have seen with something like Google Maps, in which you can move around in a physical space based on Google’s cars using scanners to capture the actual environment,” Sanford said.

One of the main tools at play involves what’s called LiDAR, or Light Detection and Ranging technology. It produces a point cloud-like image based on laser lights that determine the position of physical objects in an environment. That captured information can be made into a sort of three-dimensional database about the space and all of its components.

The technology is currently making a more mainstream debut with the latest version of the iPhone, which has a LiDAR Scanning and 3D Printing system.

Sanford uses it to map a building with high-end equipment in a very automated fashion.

“The old school process of capturing a building’s details in this way involved at least two people and a clipboard, a tape measure, maybe a handheld laser, and it would take all day,” he said. “Now, I can do it quickly with just me and my camera.”

Obviously, there’s a cost savings in the time and labor involved with this technology versus how architecture work was once done. Sanford said the process also requires less returning to a site when the human element might otherwise cause him to miss details needed for architectural drawings.

In the world of real estate — in which “that’s not the way we’ve done it in the past” is a refrain Sanford said he hears a lot of — there’s almost no use of these tools on smaller projects or in the residential market. But, some are utilizing these tools for the region’s headline developments.

“A project on the scale of the Newark Liberty International Airport renovations, it’s probably a requirement to use this technology,” he said. “It has become more prevalent in those big jobs. When I was involved with the Revel Casino project about 10 years ago, there was just a little of it going on.”

Sanford’s relatively unique embrace of the technology on the smaller end has him pairing up with other forward-thinkers like Mike Chawaga, co-founder and principal of Robotic Imaging, which digitizes existing real estate environments with drones, virtual reality cameras and other high-tech hardware.

“(Sanford) was one of the few architects we’ve come across that’s using LiDAR information to make site visits more efficient,” he said.

Chawaga’s startup maps the inside of buildings as well as outdoor environments such as Philadelphia’s Old Town — with far more accuracy, he said, then you’d get from Google.

Using unmanned flying vehicles armed with lasers to gather data for three-dimensional interiors and streetscapes might sound like science fiction, but Chawaga said it’s not far from being the norm.

“We’re just following the tech innovation curve right now, even if we’re on the early adopter list,” he said.

Automation, data analytics and virtual environments may have done some heavy lifting in other industries for decades, but the real estate industry has been weak on picking up those solid innovations, according to industry consultants.

Josh Herrenkohl is senior managing director and head of business transformation services at the global FTI Consulting‘s Real Estate Solutions practice, which is based in Roseland and New York. He said industry actors were always much more interested in the next deal, rather than the next latest-and-greatest technology.

“It has caused people to step back and say, ‘Even if we’ve got the best and brightest people in the world, people who went to the best universities and have been doing this for decades, we’re still going to be at a disadvantage relative to other organizations if we’re not investing in technology,’”  Herrenkohl said.

Real estate industry leaders aren’t keen to be laggards today on technology. And, even if some pushed for it in the past, Herrenkohl said the industry as a whole never scored high — or even much higher than the public sector — when it came to focusing on tech innovations.

Real estate firms have been busy implementing automation tools that can do away with process and workflow inefficiencies in their back offices. Herrenkohl said this has allowed companies to replace some of the lower-level, repetitive labor tasks and with more value-added work. At the same time, the pandemic-influenced embrace of tech builds on investments that were being made in the area of property technology, or proptech. Commercial real estate firms have in recent years done a lot of building “smart” features and automation into spaces.

Jared Minatelli, director of asset management at Bedminster-based Advance Realty Investors, said virtual tour technologies have also come into popularity during the pandemic, and have been well-received. His firm has utilized it at its two buildings in Harrison, Cobalt Lofts and Steel Works, as well as at the Harlow in northern Hoboken.

Even now, not every part of the process in real estate is done virtually — not everything can be done sight-unseen. That’ll remain true in the future.

“But, what’s clear to me is those that don’t make investments in technology now will be left behind in a post-COVID-19 environment,” Minatelli said. “This industry was not always at the forefront of tech implementation. COVID-19 has forever forced us to change that narrative.”

DOL to allocate $1.2M in grants to military women and minorities...