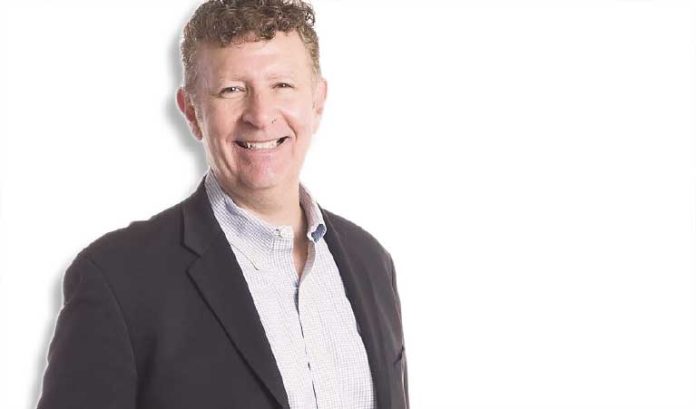 NJTechWeekly.com caught up with Patrick O’Neill, CEO of AMP Your Good, based in Mendham, which offers a platform that companies or organizations can use to develop online food drives. The company recently rebranded its food drive division, naming it #GiveHealthy because, as O’Neill said, hunger is a health issue.

There was a growing recognition, probably going back seven or eight years, that people who needed food assistance also tended to have very high rates of diet-related health issues, he said. And that was strongly correlated with the food they were consuming. Also, many people who need food assistance live in so-called food deserts, where they can’t find healthy food in nearby stores.

Amp Your Good has been working for years to convert companies and organizations into online food drives where donors can provide better, healthier food for those who need it.

“The pandemic has greatly accelerated the growth we’re experiencing,” O’Neill said. “For many organizations, doing traditional food drives isn’t an option because many organizations are operating virtually. You can’t bring canned goods into school for the school drive. You can’t bring them to the office. So, this year has represented a real acceleration, where we’re now working with a growing number of food banks across the country, where the food banks are pitching #GiveHealthy to groups that want to support them with drives. And then there are a lot of groups that find us independently.”

Over the years, Amp Your Good has worked with companies ranging from Salesforce and HubSpot to Johnson & Johnson and General Electric. It’s has been the backbone of drives at many universities and organizations like the Girl Scouts.

Amp Your Good has put its technology, branding and marketing skills to work in another area in recent years, while looking for lines of business that would have scalable social impact in a measurable way, O’Neill said.

“On the drive side, we know every time somebody donates a bag of apples instead of a can of SpaghettiOs, that’s measurable and we can talk about that in a very specific way,” he said.

Now the company is working with a public health campaign called Stop the Bleed.

Its thesis is that about 40,000 people in the U.S. die from bleeding out each year.

“And, if you’re going to bleed out, you would have cut one of your arteries someplace, and you’re bleeding profusely,” O’Neill said. “And the simple math of it is that, if you’re bleeding from an artery, profusely, you’re going to bleed out anywhere from as little as three to four minutes to maybe 10 or 12 minutes, something in that range. The average time for first responder to get to an incident scene or car accident, depending on what city you’re in, whether it’s an urban area or a rural area, is going to average somewhere between 10 and 15 minutes.”

The campaign is about two things, O’Neill told us. First, it’s about training people in what they would need to do if somebody right next to them started bleeding.

“Think of it as sort of a CPR approach for the person who’s there in the moment,” he said.

Unlike CPR, to stop somebody from bleeding, you need a tourniquet or special dressing, so there’s an equipment side of it.

He hopes that, someday, people will see a Stop the Bleed station with tourniquets and dressings next to a fire extinguisher or an automated external defibrillator, he said.

Amp Your Good has a contract with the Department of Defense.

“We’re in contact with some of the other co-sponsors of the campaign to supply marketing strategy, advice and implementation,” O’Neill said.

The organization has been building out the technology backbone of the campaign, which is partly about getting people trained, but also a lot about data collection and data management, he added.

O’Neill, who has a West Point background, said studies have proven that, in the past, 75% of soldiers who died on the battlefield died from sudden blood loss.

“So, the Army implemented a training program where every soldier was trained in stop-bleeding techniques, how to use tourniquets,” he said. “And every soldier, when you’re in a combat theater, carries a tourniquet on their person and a special kind of dressing that coagulates blood quickly. And, once they started doing that, the number of battlefield deaths from blood loss dropped by over 80%.”

Now, O’Neill is trying to help transfer this success rate to the civilian population. He said that there’s a synergy between the food drive and the Stop the Bleed campaign, in that the people who run food drives are often the same ones who want to train people to do things. He’s now involved in the consulting, and Amp Your Good has a contract to sell Stop the Bleed swag.

O’Neill noted that, while the Stop the Bleed campaign had begun before he got involved, the response to it grew very quickly — unfortunately, in reaction to school shootings. But there was no uniform way to get people and organizations on board or to provide consistent information.

“So, we’ve been in the process, for some time now, of working towards centralizing the campaign’s messaging,” he said. “(For example), when a better tourniquet or way to stop the bleeding is developed, it will be incorporated into the training.”

Tech Trends: An interview with Rachel Lyubovitzky, whose startup, EverythingBenefits, was...