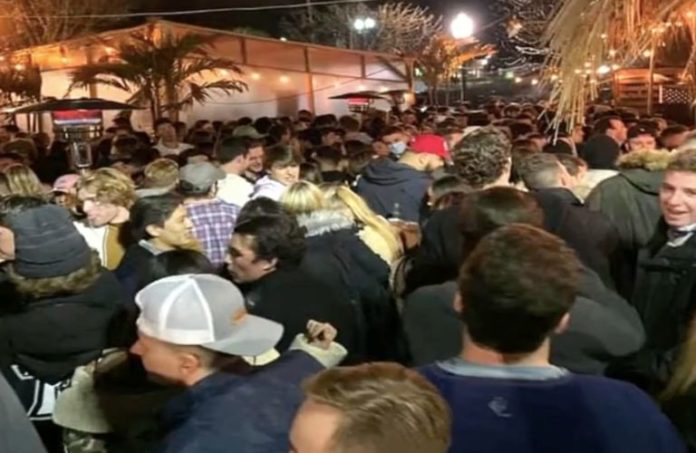 Since the COVID-19-related restrictions on indoor and outdoor dining were first announced in New Jersey, stories have come out from all across the state of restaurants that were not being vigilant and directly going against Gov. Phil Murphy’s executive orders. However, as Murphy noted at his Wednesday media briefing, he believes most restaurants are doing the right thing when it comes to safely serving their patrons.

“The overwhelming number of restaurant owners are playing by the rules and doing the right things,” Murphy said. “They’re doing all that they can to keep their businesses open, while also doing the things they need to do to protect their employees and patrons from the virus.”

However, while the governor is mostly confident about the restaurant owners in the state, there continue to be exceptions. Most recently, Portobello in Oakland was in the news for having large, outdoor gatherings on Thanksgiving eve as well as Saturday evening. In the photos from these events, no patron is social distancing and there is not a mask in sight.

Murphy sees these events as symptoms of a larger lack of empathy.

“The entire concept of personal responsibility is completely abstinent,” he said. “Outlier owners who think the rules apply to others and not to them, and who don’t support the values of their communities, give the good and hardworking restaurateurs a black eye.”

Col. Pat Callahan of the New Jersey State Police joined Murphy at his news conference to comment on the incident.

“They were cited for both maintaining a nuisance as well as executive order violations,” Callahan said. “As you can see in the photo, they had no facial coverings, no social distancing, and well over the capacity limit.”

In terms of other punishments for Portabello, the Borough Council of Oakland held an emergency meeting Monday and decided to give the restaurant a 30-day suspension of its outdoor dining activities after 4 p.m.

On Friday, it will have been nine months to the day since New Jersey had its first, lab-confirmed case of COVID-19. Wednesday, the state reported 4,350 new cases, bringing the total to 346,206.

In hospitals across the state Tuesday, 367 COVID patients were discharged, while 507 were admitted. Additionally, 51 patients died yesterday, but are not yet lab confirmed to be from COVID-related complications.

In terms of the confirmed death toll, 56 new deaths have been confirmed to be from COVID-related complications. In total, there have been 15,309 New Jersey coronavirus deaths since March, with an additional 1,836 probable deaths.

“He was just 27 years old and a member of the 161st recruiting class,” Murphy said. “Our deepest condolences are with recruit Homeijer’s family, friends and academy classmates.”

In terms of what happened specifically, not much information is known at this time. Last week, Homeijer was completing a counter move in a boxing match with a fellow recruit when he lost consciousness and later died from the injuries. The incident is currently under investigation.

Callahan knew the cadet personally and said this hit particularly close to home.

“One of the hardest things I’ve ever had to go through as a State Trooper,” he said. “As you can imagine, in an incident like this, there is a thorough review being done of the incident. With regards to Luke, he had a life of service, even though it was short.”

Callahan also announced that the 161st recruiting class will not be put on hold. He clarified that, unlike other academies, the state’s school swears recruits in at the end of the program rather than the beginning. As a result, the death will not be classified as “line-of-duty” and will have a classification announced after the investigation.

As he tries to do regularly, Murphy gave an update at his briefing about the status of virus transmission within the state’s schools.

“One of the greatest challenges of the past 10 months has been ensuring that our kids’ educations will be able to safely and responsibly continue,” he said. “The Department of Education have worked hard to ensure that there are protocols in place to protect the health and safety of our students, faculty and staff, as well as that of our larger educational communities.”

Last week, there were four new in-school outbreaks that have been linked to 16 new cases through contact tracing. In total, there have been 70 outbreaks leading to 285 COVID-19 cases. The schools are still trying to remain open in some capacity, as 89 districts are fully in-person, 483 are hybrid in-person and remote, 246 are all-remote and 38 are a mix of one or more of the three.

This has paved the way for a school year like no other, as many students, families and staff members have had to adjust to a whole new style of learning. Murphy understands that this can create friction.

“The stress is high, and we get it,” he said. “We have to do nothing but respect it and have sympathy for it with our educators, our parents, our students, our administrators and our teams.”

Murphy on the confusion of residents as to which states they can or cannot travel to/from:

“There’s no confusion. We’ve been saying for six to eight weeks: Don’t travel. Period. When we started doing this quarantine with New York and Connecticut, we had beaten the back of the curve down and other states were just experiencing the front end of the first wave. It was, and remains, our sole objective to protect public health, either from folks who are Jerseyans who travel out or visitors who are coming in. That’s been the spirit of this from Day One, and it continues to be.”