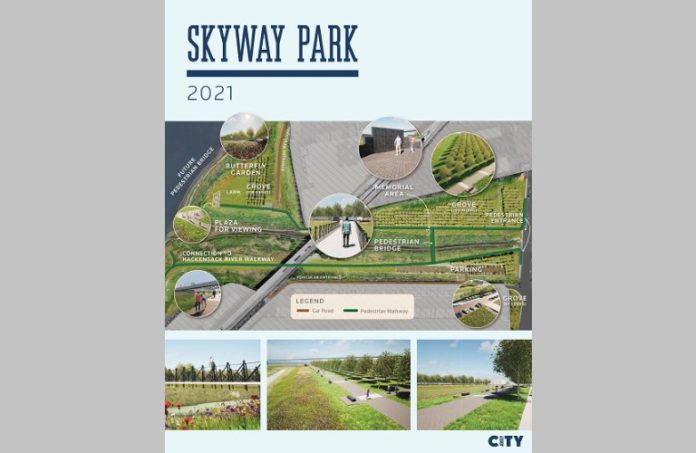 Jersey City officials, led by Mayor Steven Fulop, announced Thursday that the city is investing $10 million to transform a toxic Superfund site into 30 acres of park space along the waterfront.

Fulop, the city council, Jersey City Parks Coalition, Hackensack Riverkeeper and the Skyway Park Conservancy made the announcement about the 35-year-old site, with the city creating public access to its open greenspace along the Hackensack River.

The park will feature a pedestrian bridge, pollinator garden, waterfront walkway — and a grove of 502 trees representing a Jersey City resident who died of COVID-19 and was unable to receive appropriate funeral services due to pandemic-related safety protocols.

“Skyway Park is the latest step in expanding our parks infrastructure and bringing further investment to the city’s west side,” Fulop said in a prepared statement. “Within the new park, a tree will be planted for each of the over 500 residents who were robbed of their life and robbed of a proper farewell due to this pandemic, to give their friends and family a place where they can reflect and remember their lost loved ones.”

The former PJP Landfill site was used as a dumping ground for chemical and industrial waste starting in 1970, prior to being capped in 1985 after years of illegal dumping. The site was added to the state’s Superfund list in 1982 and has since been remediated by the state Department of Environmental Protection.

“Investing in parks and open space has remained a top priority, as the return on these investments in invaluable,” Fulop said. “This newest park will be unique in that it will become a destination where we can feel connected to those we lost in these challenging times, and I’m honored to commemorate the late Councilman (Michael) Yun, former police officer and Councilwoman Viola Davis and the many others who have made a significant impact in our community.”