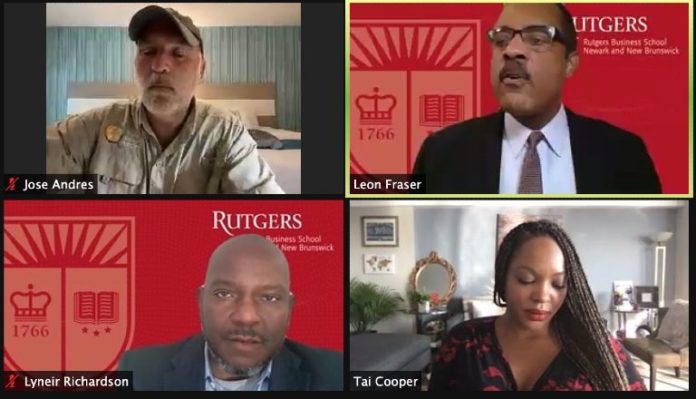 It’s time to pivot — as we all know by now. But good business advice for small and midsized companies doesn’t end there.

That’s something those who spoke at the virtual symposium held Thursday by Rutgers Business School made clear.

Lei Lei, dean of the Rutgers Business School, led off her organization’s annual Business Community Engagement Symposium. The event has been held in-person for the past four years and has featured speakers such as Newark Mayor Ras Baraka.

Even with it being presented in the form of a Zoom call this year, the Rutgers dean said she felt it was important to continue to share pressing business issues and to promote collaboration in the local economy — and “COVID will never stop” her academic institution from doing that.

This year’s keynote speaker was José Andrés, a widely regarded chef and humanitarian who was twice named to Time magazine’s “100 Most Influential People” list. He called into the conference from the island of San Andres in the Caribbean, which had just been shaken by the Category 5 Hurricane Iota.

His nonprofit, World Central Kitchen, responds to such disasters and sets up the infrastructure for the preparation of meals. It has served more than 40 million meals worldwide in the wake of catastrophic events. As Andrés described the work: When you need people’s wounds taken care of, you send doctors; when you need people fed, you send chefs.

Locally, the nonprofit formed a collaboration with Audible in Newark, called Newark Working Kitchens, earlier this year, and, in doing so served 500,000-plus meals to more than 10,000 locals who were in need of assistance as a result of the pandemic.

Andrés, in his task of conveying something relevant for New Jersey small business owners facing the unprecedented pandemic climate based on his own experiences in dealing with crises, had to issue a bit of a disclaimer: He’s skeptical of any armchair analysis of what might be a watertight solution to disaster.

“Don’t try to base your success on a perfect plan,” he said. “More often, as we saw during the pandemic, nothing is going to go as planned.”

That means making the best (and fastest-acting) decisions after a disaster based on what assets are at your disposal, Andrés said, instead of waiting too long to strategize.

“Big organizations will send people to wait in planes in the early days of an emergency to do assessments,” he said, adding that instead he found it’s best to “provide relief now, as you assess how you’ll provide more relief later.”

In his world, the chef regularly sees the effect of wading through endless meetings before taking action. At least in one calamitous event he spoke of, it led to relief organizations still deliberating about a plan of action two weeks after a major volcano exploded.

“I feel like the problem is leadership and decisions often happen in these situations by committee,” he said. “When everyone’s in charge, no one is in charge.”

All of these lessons were meant to keep with the symposium’s culinary-inspired theme, “Making ‘Dough’ Rise in the New Economy.”

Ashwani Monga, provost and executive vice chancellor of Rutgers University-Newark, said the bread-baking metaphor is a perfect one for the current situation of the state’s small and midsized businesses. In making bread, he said, even the tiniest of things can change the outcome.

And, when every business is being told that they need to alter the ingredients — to pivot in response to a vastly different economy — it’s important someone tell them how.

Mitch Cahn, president of Newark-based Unionwear, spoke in one of the symposium’s sessions about what his own business has had to do to pivot as massive events that required the wearables his company produces, baseball hats and bags, were postponed to slow the spread of COVID-19.

When the 175 people on his payroll suddenly had nothing to do, Cahn said he turned to making face shields for public hospitals in New York and hospital gowns for government buyers. That allowed him to not have to resort to laying off employees due to a lack of business. He said this break into a new market proved to be essential.

Obvious as it might be, Cahn felt it’s important to remind yourself as a business owner that it’s not just you pivoting — everyone is.

That presents two problems: You still have to convince customers and clients that you’re the one to trust, in spite of that. Also, he added, you can’t lose your identity amid all the pivoting enterprises have done.

“It’s important to remember that pivot doesn’t mean shapeshift,” he said. “It means sticking to what you know best, even if you’re doing it differently.”

The New Jersey Economic Development Authority‘s Tai Cooper drove home that, however you might need to adjust your businesses, organizations such as hers are there to help.

Cooper explained as an example that the NJEDA, where she’s senior vice president for policy and communications, has a nearly 70% discount for PPE purchased by small businesses. That discount is available until Dec. 10.

“(The pandemic) has had a devastating impact on small businesses,” she said. “It’s a challenge, but these businesses are so resilient, and we have hope.”

Honeywell spinning off two units worth $7.5B into standalone firms