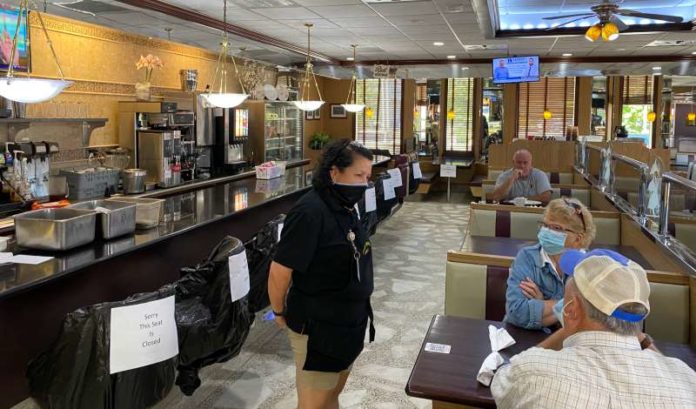 New York Gov. Andrew Cuomo announced Monday that indoor dining will be banned if the New York City’s hospitalization rate does not stabilize. Gov. Phil Murphy said such a move is not being discussed in New Jersey.

“That is not, right now, on the table for us,” Murphy said. “First of all, if we saw explicit waves of transmission coming out of the indoor dining experience, obviously we’d have a different approach. You take on a higher risk when you conduct more activities indoors … but we knew that. We are still in the mode where, if we can surgically strike, we will strike.”

Murphy, speaking at his COVID-19 briefing, also cited his administration’s surgical moves of banning bar seating and the mandatory closing time of 10 p.m. for indoor dining as actions his team has already taken that are actively keeping indoor dining safe.

This assertation from the governor comes right on the tail of two establishments being shut down in Paterson this weekend for serving alcohol after 10 p.m. The establishments, which were unnamed by the governor, had been referring to themselves as “speakeasys” — something Murphy finds humorous.

“Speakeasys: I feel like it’s 1932,” Murphy said, chuckling to himself. “The overwhelming amount of restaurant owners are doing things the right way and following the rules to ensure our communities stay safe. … That kind of spirit is admirable and deeply, deeply appreciated.”

In terms of how the hospitalization numbers will dictate any further restrictions made, Murphy remains optimistic that New Jersey’s health care system is in a manageable spot.

“I want to harken back to the spring,” he said. “We were going to run out of hospital beds, ventilators, PPE, we were at the edge.

“The fact of the matter is, we’ve spent the past 6-7 months rebuilding those capacities. We do have hospitalizations that are up meaningfully, and my guess is that they’re going to go higher. However, they’re still about 5,000 beds shy of the peak in the spring. … We have capacities and a knowledge of this. Not only knowledge of the virus, but knowledge of the range of where it could be headed.”