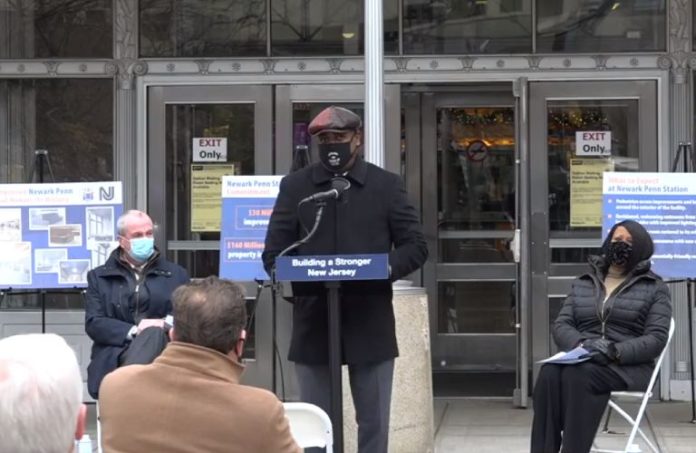 Newark Penn Station is the most important transit hub in the state. It also may be the most outdated. That will soon be changing. Gov. Phil Murphy announced Tuesday morning the station is getting a much-needed facelift.

In an announcement that included hosts of transit and elected officials, Murphy said work to bring $30 million in improvements will begin immediately — with another $160 million in upgrades coming in the next five years.

The first phase of renovations will focus on aesthetics such as restoration of the classic benches in the waiting room, installation of brighter lighting, updating of the bathrooms, improved HVAC and air handling, fresh paint and tile, and a deep clean of the limestone exterior to once again showcase the architecturally significant façade.

There will be improved directional and way-finding signage to help make sense of this station’s labyrinth of platforms and hallways. And the bus lanes will get new lighting and improved drainage — all in an effort to improve the rider experience, officials said.

Longer-term enhancements will focus on improving the station’s openness, light and overall commuter and visitor experience.

The ultimate goal is to make Newark Penn Station more of a destination, with added dining and shopping in the concourse, officials said.

The upgrades will be funded by the state.

“Penn Station is a vital hub, not just for those heading to New York City each day, but it is also a gateway to Newark and the resurgence that has taken place here over the past two decades,” Murphy said. “We are thrilled to announce these renovations, which, when completed, will help restore this historic station to its former glory.”

Newark Penn Station is the seventh-busiest rail station in North America and one of the busiest stations in the region. The station is served by New Jersey Transit commuter trains, the Newark Light Rail, the PATH and Amtrak‘s Northeast Corridor services. The station also serves as Newark’s main bus terminal.

Newark Mayor Ras Baraka said the project to upgrade, renovate, rebuild and remodel the facility is important for New Jersey as a whole, for the region and for Newark particularly.

“Newark is the largest city in the state and Penn Station is a major gateway for commerce, employment and economic development,” he said. “It is good news that this administration understands the importance of this, and are committed to ensuring that this critical piece of infrastructure has significant investment.”

Few were happier to hear the news than the heads of Onyx Equities, which own and operate Gateway One, Two and Four.

Onyx co-founder and Principal John Saraceno said the upgrades will be a key to revitalizing the area.

“Today’s announcement represents the single most critical moment in Newark’s revival as a business location in a generation,” he said. “Many companies are rethinking their long-term plans, and the shared vision for Newark Penn Station among NJ Transit, the city of Newark and the Murphy administration is sure to elevate Newark as a prospective location for businesses.

“With the improvements Onyx is making to our Gateway complex, nearly $200 million is being invested in Newark’s front door, which is sure to stimulate even more activity in an area that already had renewed energy.”

Opened in 1935, Newark Penn Station is listed on both the State and National Registers of Historic Places. The station was originally designed and still operates as an intermodal facility serving pedestrian, taxi, bus and private vehicle traffic generated by the more than 50,000 transit customers who use the station each day.

“(The station) deserves this significant investment to see its grandeur restored,” she said. “At the same time, we’ll be improving the overall customer experience at the station.”

NJ Transit CEO Kevin Corbett said the announcement is another step in the organization’s plans.

“Consistent with the goals laid out in our recently released 10-Year Strategic Plan, NJT2030, this additional funding will allow us to perform the necessary work that will improve the travel experience for the thousands of customers who travel through Newark Penn Station every day,” he said.

Murphy announces $2.8M in apprenticeship grants — with goal of hiring...