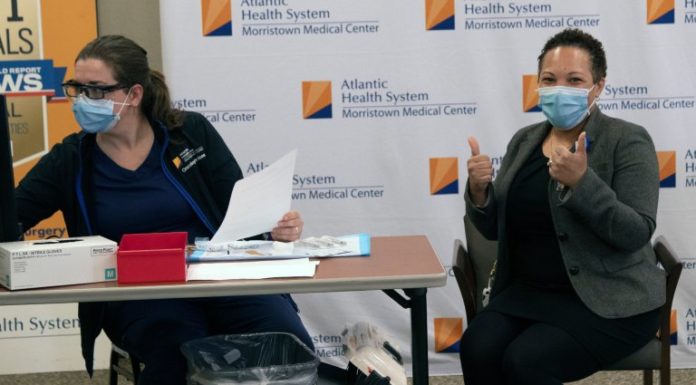 Dr. Sharen Anghel, the chairwoman of medicine at Overlook Medical Center, was the third person to get a dose of Pfizer’s COVID-19 vaccine Tuesday at Morristown Medical Center.

She counted her place in line a little differently.

“There were 44,000 people before me who got this, and the science has proved it was safe,” she said, referring to the incredible number of participants in the Pfizer trials.

It’s a key figure, she said.

On the day six hospitals in New Jersey proudly gave out the first doses of the vaccine — a moment that signals a turning point in the battle with the COVID-19 pandemic — there still are some feelings of uneasiness about taking the vaccine.

Anghel said it’s up to her and her health care colleagues to change that perception.

“This is a public health battle, and it’s our job to fight COVID everywhere,” she said. “I have lived COVID since March. I have seen people die, I have seen people suffer — and we really have something that is based in science that has been studied.”

Jeffrey Tanis felt the same way. A registered nurse who works in the ICU — and someone who has been on the front line of care of COVID-19 patients since the first patient entered Morristown — Tanis was hand-selected by Atlantic Health officials to get the ceremonial first shot.

He was happy to do so.

And to set an example.

“Just being a health care provider should show the community a lot of confidence that it’s safe and that we trust it and believe in it.”

The first shipment of the vaccine arrived at Morristown Medical Center at 7 a.m. Tuesday. Pharmacy Manager Doug Bloomstein was there to greet the FedEx truck.

Bloomstein, who has worked at the hospital for six years, said he has received many high-profile medications. The hospital was one of the few to receive a shipment of Remdesivir earlier this summer.

“We get expensive medications often,” he said. “We get drugs on shortage often. And we’re used to the meet-at-the-loading-dock-type deliveries with some of the research medications we are dealing with.”

Still, Bloomstein admitted this delivery was a little different.

“It’s different because of just how scarce a resource it is right now,” he said. “And the anticipation. There is a lot of attention on this vaccine.”

Bloomstein said Morristown did not take any extra precautions with the delivery — noting it always takes precautions.

From there, the vaccines were stored in the hospital’s two super-cold freezers until they were ready to be given to more than a dozen employees eagerly awaiting a shot.

Atlantic will begin getting regular shipments of the Pfizer vaccine. And, perhaps soon, the one from Moderna. Bloomstein is confident they can handle the shipment.

“We have the ability to handle whatever they ship us,” he said.

Tuesday’s shots were done amid much fanfare — which included a line of cameras and reporters looking to record the milestone moment. Hospital officials described the role of each of the participants. And each participant said a few words to the media after they went through the process.

When the shots resume at 7 a.m. Wednesday, it will be done in more of an assembly-line fashion. It has to be.

Trish O’Keefe, the president of Morristown Medical Center, said the system is aiming to vaccinate approximately 17,000 people in the next four weeks. That total includes all of the onsite caregivers and their immediate families, as well as transporters, EMTs and workers in affiliated facilities.

“Our goal is to vaccinate, in four weeks, all Atlantic Health System team members and physicians,” she said. “If you’re a health care provider who is part of Atlantic Health in any way, shape or form, we will be supporting you, as well as your team members.

“You don’t have to be employed by Atlantic Health; you just need to be a member of our staff.”

And, while the initial vaccines will be given out at Morristown, O’Keefe said they will soon be available at all of Atlantic’s hospitals.

“We are setting up vaccine centers at each one of our sites, so there will be ease of access for the employees there,” she said.

O’Keefe stressed getting the vaccine is voluntary. She hopes all members of the system will get it, but she understands why some may be skeptical. It’s the same reason there is hesitation in the community, she said.

“We need to educate people on the benefit of this vaccine,” she said. “I think part of it is — because it so rapidly approached us — we haven’t taken the time to really sit down, absorb it and educate it,” she said. “We’re still doing within Atlantic Health System. We’re educating those that are not clinicians and do not understand the data.

“We need to show people the data and show them that this vaccine works. A 95% efficacy is amazing.”

“The ability to have a vaccine that can get at this virus is something we could only dream about when this all started over 10 months ago,” he said.

It’s a turning point for the country. U.S. Rep. Mikie Sherrill (D-11th Dist.) hopes it is.

Part of the challenge, she said, is not only building trust in the vaccine, but rebuilding faith in the federal government.

“Unfortunately, under this administration, I don’t think there are many people in the federal government that are credible actors,” she said.

Sherrill said Dr. Anthony Fauci is the exception. It’s time to find more people like him.

“I think we’re going to need to hear from non-federal actors, people at our top medical schools, health experts coming out and saying that they’ve taken it and why it’s safe,” she said. “Normally, our federal government has a high level of trust, but I think this administration has really undermined that — so, we’re going to have to build that back.

“It will probably have to start outside the federal government.”

Anghel is ready to do her part.

“I think people are naturally nervous of anything new,” she said. “I think what’s important is to look at the science — and I spent a lot of time looking at the science.