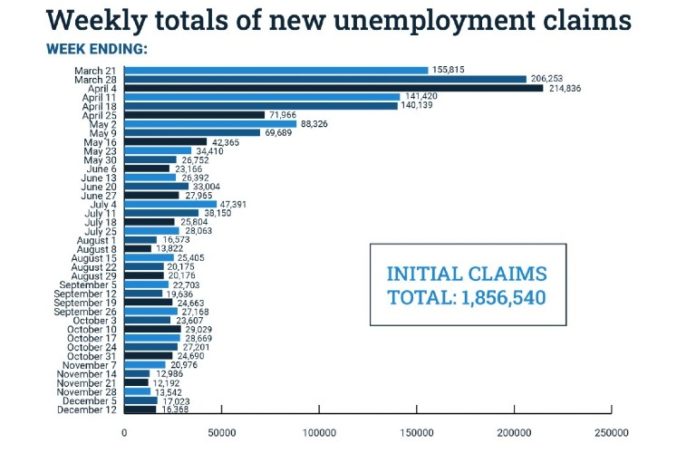 New Jersey continued to struggle with the pandemic’s effect on the jobs market, as the state unemployment rate rose despite growth in private-sector payrolls.

The state Department of Labor & Workforce Development said Thursday that estimates from the U.S. Bureau of Labor Statistics found that New Jersey employment grew by 7,100 jobs in November, with the private-sector adding 9,700 positions but the public sector losing 2,600.

In addition, the continued reentry of Jerseyans to the labor force resulted in the unemployment rate jumping 2.2 percentage points, to 10.2% for the month.

October’s employment estimate was revised higher by 2,300 jobs added, shrinking the month’s decrease in jobs to 2,900 overall. The unemployment rate also was revised lower, to 8%.

The DOL said unemployment payments to New Jersey workers have now topped the $20 billion mark in the 39 weeks since COVID-19 forced the shutdown of many parts of the state economy.

The average benefit per claimant now tops $14,000, the state noted.

“When we began the year at almost full employment, it was unfathomable we would be nearing year’s end having given out more than $20 billion in unemployment benefits to workers in need,” Labor Commissioner Robert Asaro-Angelo said in a prepared statement.