Home Opinion Editor's Desk Leading by example: At Trinitas, Horan is one of 1st to get...
Facebook
Twitter
Linkedin 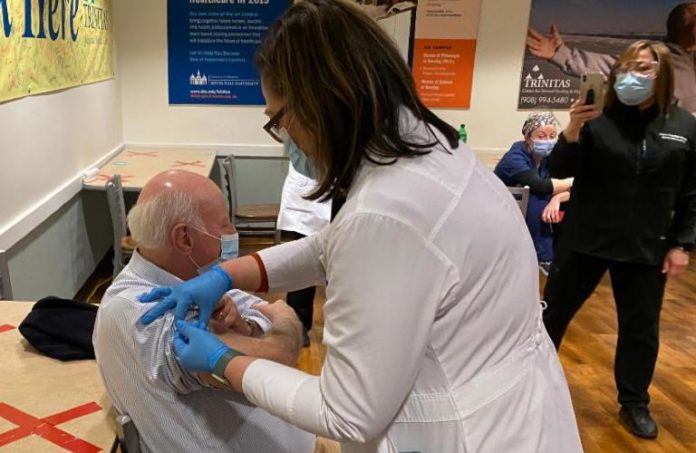 Gary Horan knows there was some reluctance among the employees at Trinitas Regional Medical Center to get the COVID-19 vaccine, so he did what any good leader would do: He volunteered to get one of the first shots when the hospital began administering the vaccine Thursday.

“Some of the employees wanted to wait and see what happens after people get the shot — to see what the reactions are,” Horan told ROI-NJ. “I thought, if I took it first, it would set an example. Obviously, I wouldn’t ask them to do anything I wouldn’t do — so, I did it.”

Soon after, he reported it was no big deal.

“It was painless,” he said. “It was just like a flu shot. I had no side effects whatsoever. And I haven’t heard of anybody who got the shot yesterday that had side effects. Some had a little soreness in the arm, but that was it — no fever or anything like that.”

Getting the shot was just the latest effort by Horan and the leaders of Trinitas to show that the vaccine is safe. Earlier in the week, they did a 30-minute webinar event for the staff — a show they have put on the hospital’s website for those who were unable to watch it live.

And, when employees come to take the shot, they watch another short video that answers more questions.

Read more from ROI-NJ on the rollout of the COVID-19 vaccine:

Trinitas hopes to vaccinate approximately 2,700 frontline caregivers in the next 2-4 weeks.

Logistically, Horan said, everything has been going as planned. Trinitas set up an online signup to ensure an orderly progression of vaccination. So far, he said, all the slots have been taken.

“We did it in a systematic way,” he said. “We wanted to make sure that the people most vulnerable to contact and COVID were gotten first. So, we have different tiers of levels of employees to get it.

“And we want to make sure, too, that we didn’t have one area, or one unit, all come in at the same time to create a staffing problem. People have the opportunity to go on a link and make an appointment according to their schedule, and that seems to be working out fairly well.”

The next step is overcoming the reluctance of some. Horan is hopeful that will dissipate with each passing day.

“I think the enthusiasm for receiving the vaccine is going to grow every single day, as people see their colleagues who got it walking around, not calling out sick, not having any kind of side effects,” he said.

The next step will be to convince the community. Being located in Elizabeth, one of the most diverse communities in the state, was cause for some concern, Horan said.

So far, it’s proven to be unfounded. In fact, the hospital gets daily visits from people in the community looking for the vaccine.

“We explain to them it’s not for the general public yet,” he said. “They know there is a priority for health care workers to get it first. And when we explain that to them, they understand.