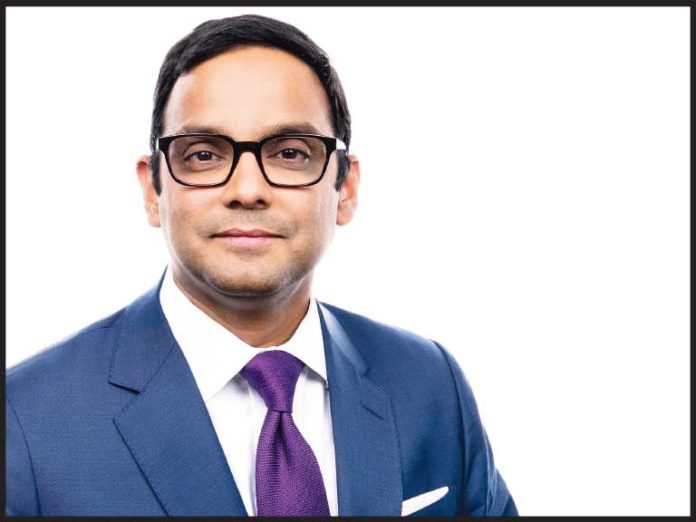 Sampath Sowmyanarayan wants to make one thing clear: Nothing good has happened because of COVID.

“Let me start with that,” he said. “It has been awful for everyone.”

But, while COVID has wrecked the U.S. and global economy, a few areas have been spared. That’s where it gets tricky to explain for Sowmyanarayan, the president of global enterprise for Verizon Business.

“If there is a silver lining to all of this, it would be this: When it comes to digital transformation and e-commerce, we made more progress in eight to 10 weeks than we made in the last eight to 10 years,” he said. “That’s the silver lining. So, in a very weird way, the timing could not have been better for 5G, because people are looking at their internet and saying, ‘I want additional connectivity options.’”

5G is the best option — and it has been throughout the pandemic, Sowmyanarayan said.

“It’s actually been a helpful thing for us during COVID,” he said. “For example, we have 40 million kids who have access to our Verizon education package, which is a hotspot — 5G enabled a lot of them to get access to that. This obsession with connectivity has been a good reason for businesses to digitize and move faster on e-commerce. 5G will help with that, too.”

There was a time, however, when Sowmyanarayan was not so sure.

“In February, we were nervous,” he said. “We thought we would have to slow down 5G deployment. We actually went faster because cities didn’t have traffic. We didn’t have to shut down traffic on Madison Avenue, because no one was there.

“So, we decided to spend half a billion dollars more to get 5G deployed faster. By the end of this year, we will essentially have 60 cities lit up with ultra-wideband 5G. And almost 200 million of the 300 million in the country will have nationwide 5G.”

Just how 5G will impact the business world is unclear to many. That’s why we’re happy Sowmyanarayan is a part of the ROI-NJ Interview Issue, our annual give-and-take with some of the top leaders in the state.

Here’s a look at the conversation, which was condensed and edited for length and clarity.

ROI: Let’s begin with the terminology: 5G, 4G, 3G — these are just numbers and letters to most people. Explain how much better each subsequent number really is.

Sampath Sowmyanarayan: Historically, 2G is faster than 1G, and 4G is faster than 3G — everyone understands that. And 5G is faster than 4G, no doubt about it — but it’s a lot more. Traditionally, speed has been the only way you measured this — 5G is a little different, because you have four or five other activating data.

Latency (the delay between a user’s action and a web application’s response to that action) was never an issue, people never really cared about it. But, as people put more and more things in the cloud, used more and more applications, cloud latency becomes important.

Then there’s device density — or, when you go to MetLife Stadium and you have 100,000 people all accessing their phones at the same time. You need something like 5G to be able to handle that type of device density. Or, maybe you’re on a factory floor or in a small refinery, where you can have 100,000 or 200,000 sensors in a small place – that’s device density. Power is another thing. There is a new 5G-enabled laptop, and it runs for two days without a recharge. So, 5G is giving you more capabilities than just speed.

ROI: Explain how it will make a difference in the economy — and for entrepreneurs or company leaders.

SS: All of the internet revolution that has happened so far — internet 1.0, 2.0 — has been around just having more speed and some location. That’s all Netflix is. Uber is speed and location. But, by having these five or six other attributes, you are going to open up multiple new business cases, multiple use cases and applications.

“Bruce Springsteen: I’ve been to many of his concerts. He can go for four hours, nonstop, take a sip of water, and go back to entertaining. It’s exactly the same as it was 20 years ago when I was in school. HIs work ethic and his ability to entertain is incredible. If all of us were able to do 50% of what he did, we’d be fine.”

“New Jersey has so many things to do — more than anywhere else. That, together with its proximity — we can get to so many places from here — is what makes New Jersey great. My family are recent transplants here and these are the two things we love most about New Jersey.”

“I think letting people have access to the best technology in the right place and in an environment that is tax-favorable to them is key. I think, if you see where you’re seeing a lot of industries growing, it is in places that have that: When you have the best talent, the best technology, in a tax-favorable environment — it grows. That doesn’t change. And I would like more and more for Jersey to be in that bucket. My background is in product engineering and product development. New Jersey doesn’t roll out of their mouth very easily when I talk to entrepreneurs. We have some of the best talent in the space proximity to other places, but it doesn’t roll off easily. That has to change. You want Jersey to roll off their tongues much easier when they want to set things up.”

We don’t know exactly what they are, what the next Netflix or Uber is with 5G. But that’s why 5G is important. At a very practical level, 5G will gives people other ways to connect to the internet. For example, fixed wireless. With 5G fixed wireless, we’re going to have tens of millions of homes and small businesses with access to high speeds — gigabit-type speeds — which is just another way to connect. Then, you work your way up into mobile edge computing, which will have different use cases. We just have to figure out how and where.

ROI: Let’s move to 2021 and talk about your business plans. How do you see it going?

SS: Two things: First, we want to bring connectivity with fixed wireless to SMB, or small and medium business. Even today, the number of SMBs which don’t have a basic website is 30% to 40%. Step one is get that spun up, using 5G as a way to do it at the right price point. Your barbershop, your small tax business, your small bodega — let’s light them up.

So, that’s the plan for 2021. By end of this year, we’ll have pretty large-scale deployment. Next year, we’ll keep tightening it, filling the gaps and holes in it.

ROI: Having access to 5G is different than having the knowledge of how to use it. How is Verizon going to help small business take advantage of 5G?

SS: The first piece has to making items plug and play. That’s critical for SMB. When you take a device — fixed wireless or anything — and you plug it in, it should work.

Second, we have a lot of programs. We have the Comeback Coach, where we’re working with SMBs to team them up with a peer adviser. There are a series of webinars on how you digitally use your devices. And we have a Yahoo small business package, which is a website you can have up and running before a late breakfast.

On enterprise stuff, it’s a little more complicated. There, we have a lot of professional services team ready when we deploy 5G. They go in and do the use cases, showing the product innovation companies can deploy.

ROI: Deploy. That’s a good word in New Jersey. We know you have launched ultra-wideband 5G in Hoboken and Jersey City (and Basking Ridge, where you are located). Should we expect to see more spots in 2021?

We are a little partial to New Jersey, since our largest team is based in New Jersey and many of us live here. We live in places like Montclair, Newark, Summit, Short Hills and Morristown. So, the short answer is we will deploy ultra-wideband more broadly in some of these towns, but there’s nothing to announce today.

ROI: Final question: The lane you’re in is very crowded. And things are changing rapidly. How is Verizon going to stay ahead of the field of competitors? What is your differentiator?

Imagine a $130 billion company, one of the largest telecoms on Earth, and that’s all we want to do. I think that’s a big thing. We want to provide connectivity to people and work with them on that. We’re not distracted by anything else.

Look, the United States is a broad country in terms of space. So, it takes decades to be the best network. It’s a little bit like chess, now that “The Queen’s Gambit” is out on Netflix. You can’t become good at chess over a summer break. Running best networks is very similar to playing chess. You can’t do decades and decades of work in optimizing networks and scaling and doing troubleshooting in a year. That’s our differentiator: best technology with the best networks and the best support.

Tech advances force advisers to adjust — or else

Come together: At Princeton, combining AI with science could change research...