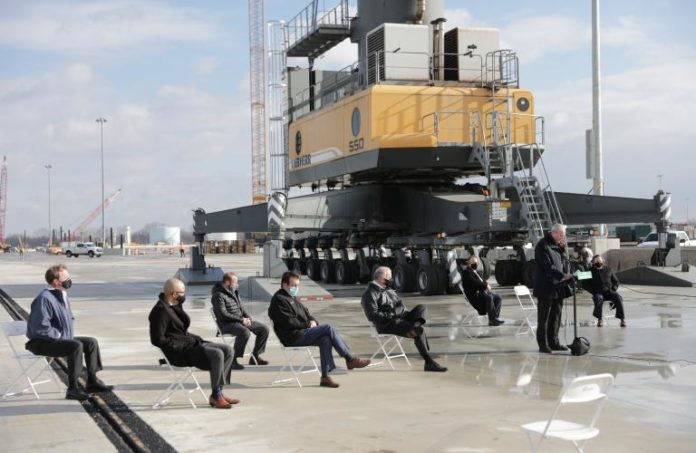 In what they are hopeful will be another step in the state becoming the leader in all things wind energy, Gov. Phil Murphy and a host of elected officials, building trades leaders, and officials from Ørsted and EEW Group, on Tuesday announced a $250 million investment in a state-of-the-art manufacturing facility to build steel components, known as monopiles, for offshore wind turbines that will serve the entire U.S. offshore wind industry.

The facility, which will be located at the Paulsboro Marine Terminal in Gloucester County, is the largest industrial offshore wind investment in the U.S. to date, and will create more than 500 high-paying jobs at full buildout, the Governor’s Office said. Construction on the facility is expected to break ground next month, with production beginning in 2023.

State officials are hoping this first-in-the-nation infrastructure investment will provide a location for essential staging, assembly and manufacturing activities related to offshore wind projects on the East Coast.

The development of the New Jersey Wind Port, together with the construction of the new manufacturing facility at the Paulsboro Marine Terminal, is a monumental step forward in solidifying New Jersey as the country’s leader in offshore wind and clean energy procurement.

“Developing New Jersey’s offshore wind capabilities has been a key priority of my administration since taking office in 2018,” Murphy said. “Offshore wind is a once-in-a-generation opportunity that allows us to protect our environment while significantly expanding and securing the state’s economy for the immediate and long term.

Christoph Schorge, the CEO of EEW Group, which is based out of Erndtebrück, Germany, said the company is happy to establish its latest manufacturing operations in New Jersey.

“(It is) a major step forward for the offshore wind industry, and further establishing EEW as the global leader in monopile foundations,” he said. “EEW’s manufacturing technology and years of experience will bring forward a factory capable of producing the world’s largest foundations required to support the ever-increasing wind turbines of the future.”

Lee Laurendeau, CEO of EEW-American Offshore Structures, said New Jersey has stepped up in the sector.

“The governor’s announcement of this massive manufacturing facility at the Port of Paulsboro demonstrates New Jersey’s commitment to clean energy and the creation of hundreds of long-term manufacturing jobs,” he said. “This state-of-the-art factory will be a catalyst for change in Paulsboro and the surrounding area, creating much needed construction, manufacturing and supply chain jobs for many decades.

“Along with the New Jersey Wind Port, the Paulsboro monopile factory will secure New Jersey’s position as the manufacturing epicenter of the emerging Offshore Wind Industry. EEW would like to thank the governor and Ørsted for their commitment and support in enabling this exciting opportunity for South Jersey.”

“New Jersey is poised to be a leader in the American offshore wind industry with key investments in its port infrastructure, like the Port of Paulsboro and the New Jersey Wind Port,” he said. “As the state looks to rebuild its economy post-COVID-19, Ørsted will be there to partner with the state to create jobs, and opportunities for local suppliers to enter into this new American industry.”

“The new wind turbine manufacturing site will power our economy by building the clean technology that will power our homes and businesses,” he said. “The need to transition to a clean energy economy is more important than ever before, and I applaud Gov. Murphy, Senate President (Steve) Sweeney, EEW and Holt for recognizing that and taking action. Critically, this project will generate hundreds of union construction jobs and I look forward to seeing the great work of our local building trades members.”

Sweeney (D-West Deptford) said the facility will support a new era of economic development and job growth in South Jersey with the ability to produce economic benefits for generations to come, he said.

“Wind energy is our future — it’s clean, it’s safe, and it offers the opportunity for New Jersey to be a dominate leader in creating a new sector to our economy. Bringing offshore wind manufacturers to New Jersey is key to making the state a hub of the supply chain for wind energy products and services.

“The new headquarters for EEW will locate a leading manufacturer of monopiles to the Paulsboro Terminal, where it will help make the port a thriving center of commerce. The collaboration between the public and private sectors to get this done is a powerful reminder of what we have to do to create economic opportunities and what we can do to promote offshore wind energy.”

“Offshore wind presents an amazing opportunity for New Jersey to build a stronger, fairer economy while creating more clean energy and advancing important environmental justice goals,” he said. “The offshore wind industry is growing rapidly, and, thanks to Gov. Murphy’s vision, New Jersey is well-positioned to be a hub for the American industry.

Energy’s role in N.J.’s future: 5 questions with Maddy Urbish of...