Home Opinion Editor's Desk This top doc was eager for any COVID vaccine — but was...
Facebook
Twitter
Linkedin 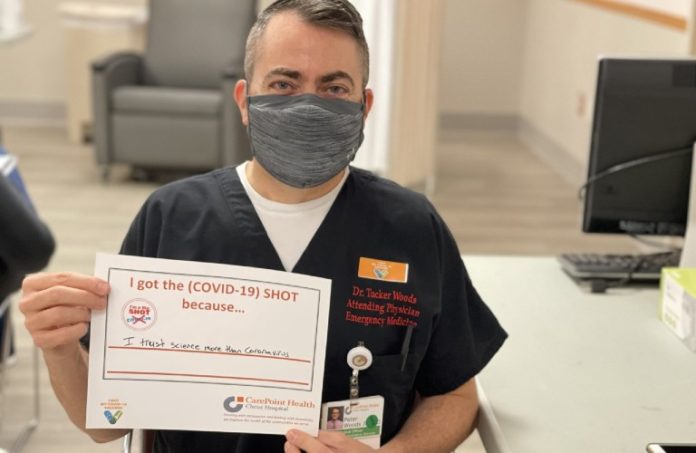 As the chief medical officer at CarePoint Health – Christ Hospital in Jersey City, Dr. Tucker Woods had to play it straight — and be truthful — when other health care professionals asked him about which vaccine they should take: Pfizer or Moderna?

“My answer is always, get whichever one you get your hands on first,” he said. “They are almost identical. Moderna was 94.1% effective; Pfizer was 95% effective. They’re both just a modern medical marvel. They are both outstanding.”

But they are not the same.

The Pfizer vaccine, which came out first, needs to be stored at ultracold — some would say, arctic-like — temperatures. Moderna’s vaccine can be stored in a standard hospital freezer.

That’s why, when Woods learned Christ Hospital would be getting the Moderna vaccine this week, becoming one of the first New Jersey hospitals to get the recently approved vaccine, he was thrilled.

“I was praying we would get Moderna,” he said. “They’re both excellent, but there is that ultracold freezer requirement. Most hospitals across the country, and most doctors’ offices, don’t have these expensive ultracold freezers.

“We could have still taken Pfizer, but we would have had to receive dry ice deliveries every day.”

That could lead to other issues, Woods said.

“I was thinking to myself, ‘What if we got a snowstorm with 2 feet of snow and we couldn’t get dry ice delivered that day,’” he said. “The vaccine could spoil. And what do we do if we had 400 doses in our fridge or freezer?

“That’s why I was privately relieved that we got Moderna.”

Woods said Christ Hospital now will only get the Moderna vaccine.

“As long as there are no supply chain disruptions, once you’re Pfizer, you should always be Pfizer, and vice versa — once you’re Moderna, you’re always Moderna. The reason being is that, if shot No. 1 is Moderna, you don’t want to have a mixup where shot No. 2 is Pfizer.”

The Moderna vaccine may not need to be stored in arctic temperatures, but it does come with some regulations, Woods said.

“We measure the temperature automatically every 30 minutes in the freezer; we have what’s called a digital data logger, too.”

The biggest challenge has been convincing the staff to get vaccinated. There still are some concerns. Because of it, Woods has been doing webinars among his own staff, detailing the data.

He said he understands the hesitation, but said he feels the staff is coming around. Seeing people get the vaccine with little issue has helped. As has a campaign Woods and the team started: Each person, while in the mandatory waiting period, gets to fill out a sheet explaining why (or for whom) they got the shot.

“When I do these virtual town halls and educate people, they start to understand,” he said. “They just want answers. And, I think everybody is going to be OK once they are armed with facts.

“There have been people who I remembered a week ago were a ‘No,’ all of a sudden show up and get a shot.”

Woods said the arrival of the vaccine has changed the mood of the hospital, which is located in one of hardest-hit areas of the country.

“It was an emotional moment when the vaccine arrived,” he said. “We got the UPS tracking number Sunday night, and I was like a kid in a candy store, just watching it going from one town to another.”

“You can how it’s just running rampant across the country,” he said. “Yesterday was the second-highest number of deaths the nation has seen. It’s like having a 9/11 every day. It’s hard.

“But, now, I feel like I can breathe again. I think the vaccine is our way out of this pandemic. I truly believe that. I got my shot yesterday and It’s like, ‘I can finally start to see the light at the end of the tunnel.’ I am so relieved that it’s here.”