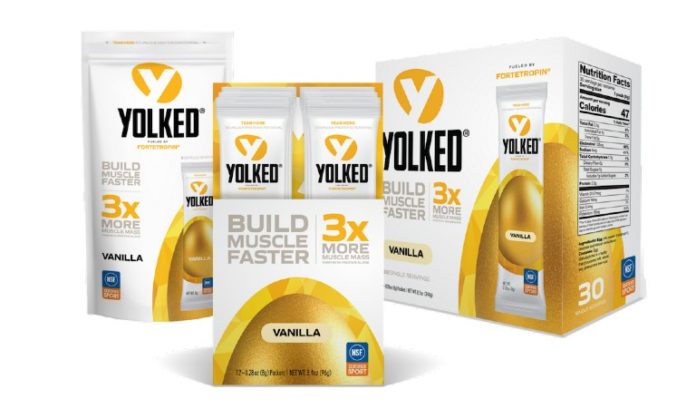 Fortetropin … doesn’t quite have a ring to it. The compound is just the right scientific mixture of hard-to-pronounce and difficult-to-remember.

In truth, said Joseph Mannello, leader of the company that patented Fortetropin, it’s a beefed-up name given to an otherwise simple egg yolk extract.

But, in the world of advertising muscle-building products, simple is good.

“Athletes have tried so many different, often artificial products for muscle health,” he said. “Ours happens to be a natural food product, not a synthetic one, that has benefits for people of all ages.”

Food is medicine, added Mannello, CEO and director at MYOS Corp. In this case, it’s also business for the 14-employee Cedar Knolls firm.

MYOS Corp. uses its patented fertilized egg yolk composition in several products. The aptly-named YOLKED does a lot of the heavy lifting, as the company’s brand for young athletes. It also operates under the Qurr brand, which markets the same muscle health benefits in the form of puddings, powders and shakes. The company also has a line of products for pets.

Mannello said the company’s muscle support products represent a strong portfolio, but he’s putting a lot of emphasis on what’s to come — and the different demographics future products will reach.

“YOLKED, for example, is a really edgy, young athlete brand and we’re going to expand on that,” he said. “But we’re also going to go onto the 50 and older market, where people are starting to pay attention to muscle, (and) there have been studies done in regards to muscle mass and longevity that show muscle mass is key.”

Mannello referenced a University of California-Berkeley clinical trial that reported that people taking Fortetropin between the ages of 60 and 75 experienced an 18% increase in muscle protein synthesis compared with a placebo.

“The growth trend in pet products for the next five and 10 years is enormous,” Mannello said. “Millennials are taking care of pets more and also using pet insurance. The pet insurance market is very different from the human market — it often covers the cost of supplements.”

Multiple pet insurance companies offer at least partial reimbursement coverage for this formula for dogs. The company is also testing a formula for cats.

The pandemic hasn’t weighed too heavily on the muscle health company, but more studies have been stalled. Mannello said continuing research into the compound’s use in humans and pets is crucial, even if he claims there’s not always an interest in validating the efficacy of products among competitors in this industry.

After becoming a private company following a 2020 merger that spun it off from its former public company, Myos Rens Technology, Mannello is optimistic about MYOS Corp.’s prospects in 2021.

“We have already five published studies that have proven out the theory that the company was based on,” he said. “We’re looking forward to further proving our product helps increase lean muscle and decrease muscle atrophy, because we’ve seen through studies, not ones we’ve done, that people with more muscle tend to fight disease better.”