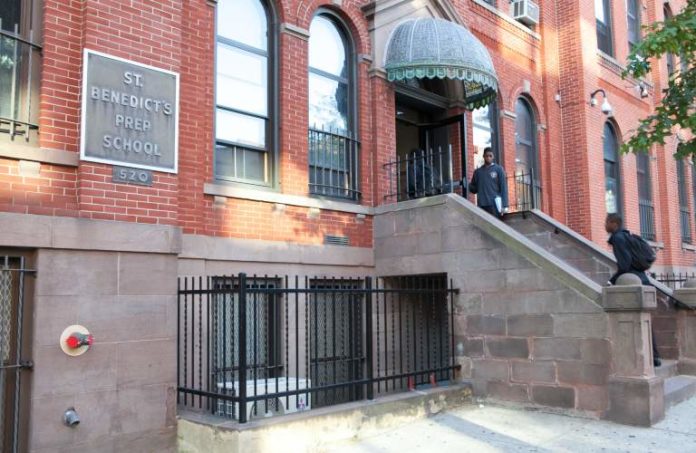 When Abdul Moore stares out of the office windows of the towering Prudential Financial headquarters in Newark, he can see the school he attended as a boy.

From up there, the St. Benedict’s Preparatory School campus feels, to him, far away.

It’s less about the distance — the school lies within 10 blocks of the building where he’s climbed to the role of director of digital marketing — and more about how far he’s come because of that small institution.

“I still use so much of what I learned there today,” he said. “I always impress on people on my team that they should make sure to put their best effort forward. It’s not just for your benefit, it’s for your team’s. It’s about supporting one another at the same time that you’re making sure that you’re working toward excellence.”

Moore, who helps lead Prudential’s digital marketing team, is not alone. Besides the other St. Benedict’s alumni Moore works alongside at Prudential — and he proudly says there are a great deal, all with the instant camaraderie of their shared experience on the campus below them — the college preparatory school has turned around the lives of generations of Newark students.

It sets students on an educational course that outperforms, by far, the statistics for youth of color matriculating in colleges each year nationally. Only about a third of the country’s Black and Hispanic students successfully enroll in college, according to the National Center for Education Statistics. But 98% of the Newark institution’s students make it, and 84% either earn a degree within four years or stay on track to do so by then, according to the school’s own figures.

So, how does a K-12 school run by the Catholic Church’s Benedictine monks post these college placement results — and alumni in high positions in New Jersey’s businesses?

Didier Jean-Baptiste, dean of seniors and college placement at St. Benedict’s, might have the answer. Not that he’d say it, but the alumnus of St. Benedict’s, who has helped guide the school for many years, might partly be the answer, too.

For him, college placement isn’t a miracle: You just have to give students a chance to lead.

Often, that means offering leadership — and the chance to be part of a supportive team, the sort that Moore alludes to — to students who haven’t been afforded as many opportunities as other youth. Although the school welcomes students from all racial, religious or socioeconomic groups, it places a special emphasis on serving those from minority communities, and especially those from low-income backgrounds. Around half of the school’s student body is Black.

By now, St. Benedict’s is a known quantity in Newark. The “little school with a big impact,” as Jean-Baptiste calls it, has produced lawyers, doctors, firefighters, police officers and teachers — including about 40% of its own staff. The small campus, nestled in Newark’s University Heights, not far from New Jersey Institute of Technology and Rutgers University’s Newark campus, made a national debut on the show “60 Minutes” several years ago.

The school’s noted achievements are an answered prayer for an institution that was once entirely closed down. After being established in 1868 by the monks of the Newark Abbey monastery, the school’s leaders announced that the school would be non-operational in 1972.

That followed years of unrest in Newark following the city’s historic 1967 race riots. The school was at peak enrollment — about 800 kids just in the high school — before the white middle-class residents that made up the school’s population fled for other nearby towns, Jean-Baptiste said.

Many of the Benedictine Catholic school’s monks would go on to start a new monastery and school, Delbarton School in Morristown.

“That was because some of the monks just didn’t feel like they could live in and serve the city of Newark when it was changing so fast,” Jean-Baptiste said. “At that time, the change was kind of explosive.”

Others stayed behind in Newark. One of them was St. Benedict’s current headmaster, Father Edwin Leahy, who ended up reopening the school in 1974 with just 89 kids and 14 faculty members.

“When it reopened, it was with a totally different population, all kids from the neighborhood, not commuting to the city,” Jean-Baptiste said. “(Headmaster Leahy), another alumni of the school, guided St. Benedict’s through this renaissance. And he’s still headmaster today.”

The school does things differently, and Jean-Baptiste admits it requires an immense amount of buy-in from the school’s boys (and, as of late 2020, girls, after the school decided to break from a 100-year tradition by admitting them from the closing Benedictine Academy in Elizabeth).

As an example of the buy-in Jean-Baptiste refers to: At the end of their freshmen year, students have to embark on a 55-mile hike over the Appalachian Trail. During the hike, which spans the High Point State Park and the Delaware Water Gap in northwest New Jersey, students focus on assigned jobs, including first aid specialists, cooking duties or navigation.

Jean-Baptiste said the school’s leaders also want students to process the range of issues that might be affecting their home life: to wit, the painful trifecta of substance abuse, poverty and warring families.

“You have to bounce back,” Jean-Baptiste said. “You can’t let obstacles get in the way. As part of that, we have to teach them how to clear obstacles out of the way. We emphasize counseling, because a kid can’t learn if he or she is preoccupied with things going on at home.”

Moore knew something about obstacles. The St. Benedict’s alumnus and Prudential leader lamented the impact an early divorce had on his youth. His then-single mother, a speech therapist who worked in Newark, sought to get him the best education possible.

“My mother wanted to push (her children) to make sure we were living up to our potential in school,” Moore said. “But a school where that was possible … wasn’t easy to find.”

Until he attended St. Benedict’s, Moore said he was underperforming. That changed when he got the chance to lead — and be led and supported by the school’s upperclassmen, who he said conveyed lessons about consequences at an important juncture in his life.

Moore tries to remain connected to the school through the global company he works for, which was the first corporate donor the school had when it reopened its doors in a transformed Newark.

He’s grateful to the school for helping reveal what was possible for him: A career far up a tower that once was an empty lot — one that he knew to hurry through on his way to school.

“At that time, the vacant lot that (Prudential’s headquarters) was later built on was a dangerous place,” he said. “It’s remarkable now — 30 years in the future — to think about how much everything has really changed.”