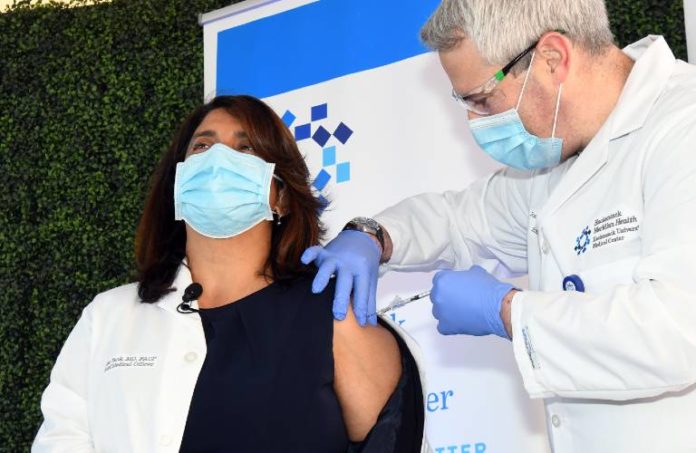 Gov. Phil Murphy announced the state is entering “Phase 1B” of COVID-19 vaccine distribution — and did so while saying the number of people who have received at least one shot of the vaccine has been “underreported.”

Murphy said the state is entering Phase 1B before everyone in Phase 1A — frontline health care workers and those in long-term care facilities — has been vaccinated.

“Effective tomorrow, police and fire professionals will be eligible to receive their vaccinations,” Murphy said. “Bless them all. These are folks who have been just as much in harm’s way on the front lines as many of our health care workers, and they often have been called upon for emergency medical support.”

Murphy said the state has distributed 137,829 total vaccines so far — but noted he thinks these numbers may not be accurate.

“There is a significant amount of underreporting,” he said. “I think this is what every American state is going through, frankly. But, there is no question that number is undercounted. That will smooth out over time.”

Murphy is confident the pace of vaccination will increase and noted the state’s vaccination preregistration portal, which was launched Tuesday. In this portal, residents are able to get their information into the system so that, as soon as one becomes available, they can be notified about how to receive their vaccination.

“Throughout the day, more than 450,000 New Jerseyans preregistered for their vaccinations,” Murphy said. “That number alone gives us great optimism as we continue to roll out our robust, statewide vaccine program.”

The governor announced that the state will be opening two new vaccination mega sites on Friday morning. One will be at the Rockaway Townsquare mall in Morris County, while the other will be located at Rowan College of South Jersey in Gloucester County.

The Governor’s Office is still actively searching for retired health care professionals with vaccination skills to help with the incoming rush of patients looking for a vaccine. To sign up to volunteer, residents can visit covid19.nj.gov/volunteer.

In hospitals across the state Tuesday, 449 COVID-19 patients were discharged, while 459 new patients were admitted. There were 62 in-hospital deaths Tuesday, but they are awaiting confirmation from a lab.

Murphy said 104 deaths are now confirmed to be from COVID-19 related complications. This puts the death total since March at 17,464 deaths, with an additional 2,059 deaths classified as “probable.”

After nearly 30 years of being under state control, Murphy announced that the Paterson School District has met all requirements necessary to regain local control.

“There are a lot of people who have worked hard to prepare for the restoration of local control of Paterson’s schools,” he said. “Today, all of their hard work has paid off. I want to thank Mayor Andre Sayegh of Paterson, among so many others, over the past three decades, for their commitment to the students, families and educators of Paterson.”

The state has had control of the Paterson School District since 1991, when it first stepped in to investigate allegations of corruption, fiscal mismanagement, nepotism and other significant factors. Paterson is now the second district to regain local control during Murphy’s tenure — earlier this year the State Board of Education gave local control back to Newark Public Schools.

Murphy also provided an update on his administration’s efforts to close the digital divide among students learning from home virtually. In the beginning of December, a total of 31,560 students needed either a device, connectivity or both. By the end of the month, only 8,819 were in need. More specifically, 1,263 students needed connectivity, 6,959 required a device, and 597 needed both.