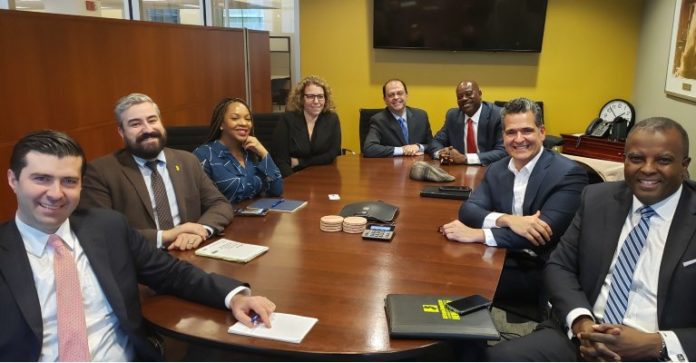 Carlos Medina loves to look at the picture that sits in his office. It offers him a friendly reminder of the past — and a glorious vision of what could be the future.

Looking back, he sees a full conference room where no one wore a mask. The picture was taken a few months before COVID-19 became our reality. Looking forward, he sees what New Jersey can be, a diverse melting pot working together to create a better economic future.

“To me, that picture is New Jersey,” he said.

As Medina prepares for a virtual version of the Hispanic Chamber’s annual gala (it’s Friday night; click here for the gala and here for the afterparty), he was asked what he wants to see moving forward for his organization — which represents the fastest-growing segment of small business owners in the state.

He said was confident that Hispanic business owners can survive and thrive on their own, but he knows the community — and the state — will be better off if they work together.

“That meeting was pre-pandemic, when things were going well,” he said. “We talked about the good things we could do and how we wanted to work together. And they kept their word. They really want to work with all of us. And they did.”

Medina cited one example. When the pandemic struck, the EDA provided grant money to help the Hispanic Chamber (and other minority chambers) help its members apply for state and federal grants. It was a difference-maker in the early days of COVID, he said.

“We were able to process so many more applications than we otherwise would have,” he said. “We have a lot of mom-and-pop members, so there was a lot of hand-holding required, but we were able to get it done, thanks to the EDA. They have a great team and I think they really reflect New Jersey.”

New Jersey, of course, is a melting pot of more than just Hispanics. Medina recognizes that, too. And he recognizes that different groups’ ability to work together is key. He cites his relationship with Harmon as an example.

“There are some members of different ethnicities that don’t care about anyone but themselves,” he said. “We’ve always tried to reach out and include everyone. John does, too.

“I love working with John because I think both of our struggles are real. And there’s a recognition by the Hispanic community that many inroads were made by the first wave of African American pioneers, so, I think we’re naturally synergistic. And we have goals that are common.”

The goals of all minority business groups are easy to spell out: More access to capital. More opportunities to grow. More recognition for what they already have done. More seats at the table.

“I’ve had company leaders get mad at me when I asked them, ‘What’s your board of directors look like?’ even when I know the answer,” he said. “It’s probably cost me a sponsorship here or there — but asking the question and constantly showing them the statistics is the only way you’re going to move the needle.

“You have to be in people’s ear. I try to do things with honey, not vinegar, but it’s hard. I think if you’re too nice, you get taken advantage of.”

He praises Gov. Phil Murphy for his outreach to the Hispanic business community.

“To the governor’s credit, I was the emcee for an event he had for Hispanic Heritage Month,” he said. “That was a wonderful recognition of the Hispanic community.”

The recognition is not perfect, Medina said. He said he’s bothered that there are no Hispanics on the 15-member board of governors at Rutgers University.

“We’re 20% of the population,” he said. “You could argue that there should be three, not two or even one, but, instead, there’s none.”

“I’m not sure we are as top of mind as we should be when there are openings for senior leadership positions around the state,” he said.

It’s why Medina is fighting for more opportunities to work with other groups — though he’s confident the Hispanic business community can make it on its own if it has to.

“We’re going to be booming with or without anything that a government entity could make available to us,” he said. “This year reminds me of 2009, when we were in a recession and businesses were dropping. Hispanic businesses grew then. So, I’m confident we’re going to dig New Jersey out of this recession, because we’re resilient and we’re used to having to run through quicksand to get things done.”

Of course, Medina would prefer an easier route.

“What do I want to see in 2021?” he asked, then answered. “I want to see people making it a little easier to get through that quicksand. I want equal access to things that other businesses in New Jersey receive.  I want to see access to capital. I want the governor to work with banks to ease up on some of the collateral requirements.

“I want to see everyone working together.”

Just as they are in that picture.