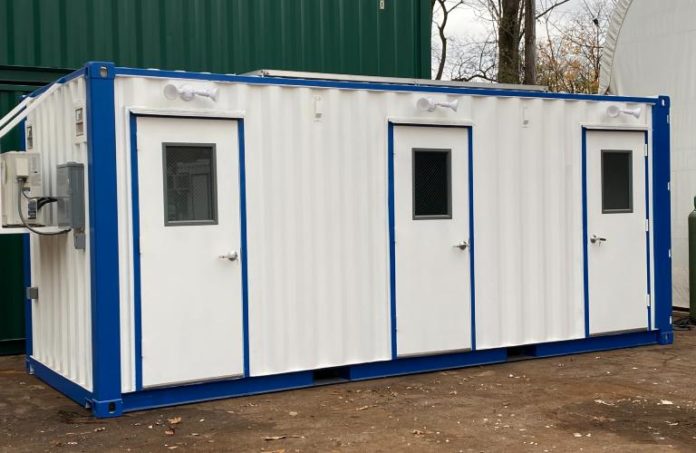 As New Jersey residents require COVID-19 tests by the boatload around the holidays, local companies are delivering the goods in the form of shipping containers.

New life has been breathed into these metal boxes in various ways — as small houses, storage units, food trucks or even hospital wards in South Korea during its battle with the coronavirus — as part of a trend called “cargotecture.” The latest addition to the list of ways shipping containers have been repurposed, pioneered in large part in the Garden State, is as testing sites.

As one example of that, Mobile Health Solutions and some of its local partners have been rolling out 8-by-20-foot testing centers made from materials once used for holding cargo. Real estate firm R.J. Brunelli & Co. partnered in the expansion of these testing centers with Mobile Health Solutions, an affiliate of Red Bank-based Immediate Care Medical.

Sal Cannizzaro, principal of both companies, as well as the founder and CEO of SFC Enterprises Inc., said his company has been involved in testing since the beginning of the pandemic. But the testing approach earlier in the year likely wouldn’t withstand the elements during colder months.

“We were doing lots of testing in the warmer spring months by setting up tents in parking lots,” he said. “But, as winter came, and as we were looking at testing and helping treat those who might also be coming in with the (seasonal) flu, we came up with the concept of utilizing shipping containers as insulated medical suites.”

Cannizzaro said his company worked with municipalities and landlords throughout central and northern New Jersey to obtain approvals to set up these mobile testing centers in shopping center parking lots. It also went to the office parks of businesses that had hundreds or thousands of employees that needed tests.

Especially around Thanksgiving and leading up to Christmas gatherings, medical professionals were using the former shipping containers to administer hundreds of FDA-approved tests every day, Cannizzaro said.

“They’re not only very functional, they’re really nicely done on the interior, with high-gloss paneled walls and ceilings,” Cannizzaro said. “They can also be hooked up to generators and electricity depending on the location, which some of the municipalities we’ve worked with have helped with.”

As COVID-19 case counts climb, and so the need for testing facilities that can be quickly deployed continues to be great, a number of firms have gotten involved in designing similar solutions.

Regionally, companies were introducing the idea of popup COVID-19 test sites as early as June. Across the country, there were global architecture firms such as Perkins and Will even conceptualizing the rollout of testing units made from out-of-commission school buses.

New Jersey Institute of Technology, University Hospital in Newark and the Tuchman Foundation also collaborated earlier this year to turn shipping containers into modular health facilities, designed to be reconfigured based on the needs of hospitals and nursing homes.

Cannizzaro said he’s been inspired by efforts spurred by the demands of the pandemic. He felt it was important to participate in that innovation locally — on behalf of New Jersey townships that want to ensure the virus doesn’t spread further than it already has.

“What they don’t want is for people to be waiting hours upon hours for tests and to get down and discouraged, and we don’t want that either,” Cannizzaro said. “We feel that innovations are required to get the public easier access to what they desire and need right now.”

AtlantiCare’s separation from Geisinger is complete