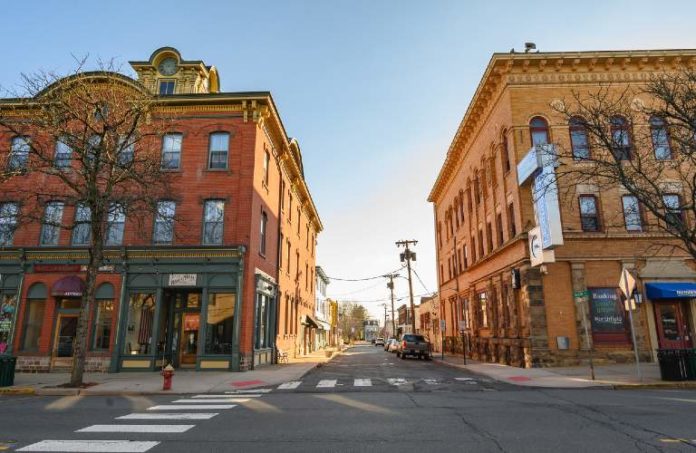 Flemington has a lot of history. About 60% of its buildings are on the National Register of Historic Places — the second-highest number of sites with this designation, next to Cape May.

Its business improvement group is proud of that.

But becoming 100% a thing of the past isn’t part of the plan.

The Hunterdon County borough’s leaders have been fighting to keep their 1-square-mile community from entering the category of what once was. Their efforts have culminated in a state grant-funded project to reinvent many aspects of the storied Flemington.

The endeavor is timed with some confidence about the borough’s primarily Main Street, small businesses emerging mostly unscathed from the pandemic’s downturn. Of the community’s 400 businesses, there have been only 10 closures (mostly national franchise businesses) — and 15 business openings (mostly smaller businesses, not chains).

It’s a far cry from what was anticipated to be the result for an area full of traditional retail stores, which largely relied on the borough’s regular events to generate foot traffic.

The borough’s businesses couldn’t count on events during the pandemic, but it did have a business improvement organization, the Flemington Community Partnership. The group, led by Executive Director Robin Lapidus, did what it could to keep shoppers supporting local business.

“How to do business in a downtown area such as ours became complicated,” Lapidus said. “We all had to learn how to do something as basic as buying a birthday gift for someone. But, we’ve fared well, and my understanding from other organizations is that areas that have managed downtowns in place have fared better than places where there wasn’t a designated organization that focused on communicating about how to conduct business locally.”

The business group is also spearheading — in tandem with the borough’s mayor, council and the county’s chamber of commerce — a planning process for needed updates in Flemington.

The community input-driven process began last year, when it received $100,000 from the New Jersey Economic Development Authority to analyze possible Opportunity Zone investments. Flemington, the only rural area selected by the NJEDA, was one of five New Jersey communities that got the grant.

“Our goal upon receiving that grant was to have the community come together and develop a consensus on our wish list for future growth,” Lapidus said. “That makes future development so much easier, when your community has really worked in partnership on what our hopes and desires for the area are.”

Out of those conversations, which have had to migrate to Zoom during the health crisis, one thing has become clear: Everyone wants to strike a balance between preserving the borough’s history, Lapidus said, and creating a more active, vibrant and walkable community.

Flemington’s history includes many firsts, including innovations in the history of rail and agriculture. It still has a historic train track used for freight that passes the borough every Wednesday and Saturday. The train cars touch each part of the borough.

The roads and walkways, however, are less accommodating.

“We really could use more cohesive corridors within the borough to easily go from one shopping area to another,” Lapidus said. “That’s really part of our focus.”

The Central Jersey borough also lacks amenities, with the dearth of hotels forcing most overnight visitors to stay in hotels in neighboring Somerset County.

What it does have is the Liberty Village Outlets, which has the designation of the nation’s first retail outlet shopping center. The mall, after it opened in 1981, once had 30-plus buses hauling shoppers in on a daily rotation.

“Someone who grew up in New Jersey may recall some of the commercials, or even visiting the mall,” she said. “But everything goes in a cycle. Outlet malls became commonplace, and some became very new and dynamic in other places. So, this property is really ready to become something else that will hopefully be equally as vital and exciting to go to.”

The borough is working with global downtown development experts, Stantec, on its plan to modernize its downtown core, intending to craft a vision of a vibrant downtown environment energized by new mixed-use development and animated by local businesses and cultural programming

“We have to be realistic about the future, but we’re incredibly optimistic,” Lapidus said. “Flemington was so successful where it sits in Hunterdon County, as a kind of the jewel in the crown. We’re surrounded by 1,600 farms and we live in a beautiful part of the state. We have something for everyone. We just have to pull together as a community to make good decisions about our future and tell our story.”

Manufacturing Cares Food Drive tops $700K — here’s how you can...