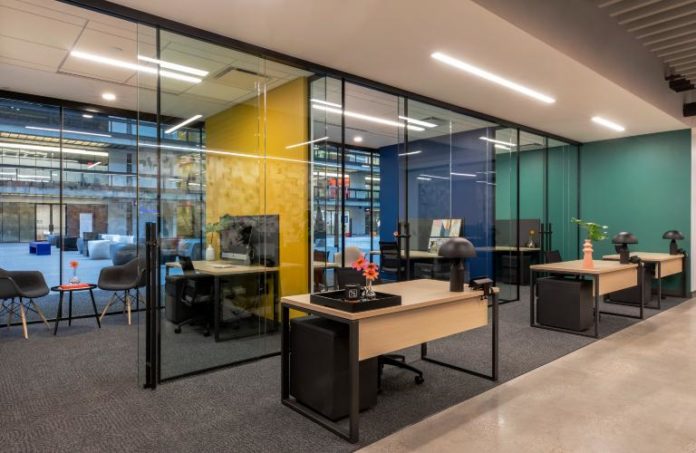 Coworking spaces in New Jersey are still expanding, despite the dawning of a new era of work … begging the question: Are these facilities actually in demand during the current health crisis?

The answer, according to owners of these spaces, such as Sean Donohue of the coworking facility in the “metroburb” office park Bell Works, is most easily extracted from those taking tours of the spaces.

“The narrative is often the same one from people who have been working from home,” he said. “’I’ve been working there,’ they say, ‘I thought it would be the greatest thing ever.’

“’I’ve got to get out of my house and into a professional environment.’”

This new hub is commingling with other facilities in a trend of increasing size and scope of shared office environments in New Jersey. It’s a trend that’s slowly restarting after a sudden stop.

The coworking model had been soaring in popularity. However, in the early days of the pandemic, when the model of bringing workers into close confines so obviously clashed with health orders and COVID-19 protocols, stories emerged of these spaces failing across the region.

But the effect was not felt proportionally across this new niche of the real estate sector. Donohue said a couple of things worked in favor of his coworking space, including the accelerated migration of workers out of dense urban areas and into more suburban corridors of the Garden State.

He added that the plans for the space’s expansion, which predated the pandemic, were already set to allow workers to spread out more — in the way that happens to be a requirement now.

“We were already trending toward more private spaces before this,” Donohue said. “Based on user feedback, we’ve already been adding more dedicated workspaces with more partitions.”

So, the business was somewhat prepared, even if it still had to revamp house policies regarding mask wearing, as well as invest in more free-flowing walkways, increased fresh airflows and sanitizing stations in common areas.

The fact that some of these shared offices, such as the one at Bell Works, were still in the process of being designed or expanded during the pandemic allowed the new restrictions to shape the final office space. Round Table Studios, a coworking facility at the Park in Berkeley Heights, is beneficiary of that timing.

Steve Kilroy, senior vice president, hospitality and marketing, at the Connell Co., which is partnering with coworking company Hana on the project, said their flexible work center is planned to open at the beginning of 2021.

The marketing refers to the coworking space as “upscale” for the fact that the facility’s membership comes with fitness center access and other amenities. There’s also a social club aspect to the center, a component that’s a gamble in a COVID-affected world, but one the facility’s owners expect to pay off in the long run.

In both the short and long term, they expect to gain from the flexible work arrangements employees have suddenly found themselves in.

“We expect to benefit from the new options for working remotely people will have,” he said. “And we expect companies will be able to achieve a ‘spoke and hub’ approach in the region with the help of (coworking facilities).”

Coworking facilities report that they have seen some increase of business from companies outfitting their traditional office spaces differently in response to COVID-19 or those in limbo as leases expire in the more expensive New York office market.

In either case, Donohue said, it’s often the case these days that a company is looking for a temporary work situation for a mostly remote employee base to collaborate without the commitment of a lease.

“And I think you’re going to see a continued rebalancing of people going into the office and people working from home,” he said. “We know there’s going to be a flexibility change. The days of having a big headquarters, making everyone travel to that one location, are possibly going away.”

The pandemic, and the ability to work from the comfort of one’s home, might have chilled some on the idea of coworking spaces.

But, if you ask them, their prospects are still red-hot.

“The rebound has been really good for us,” Donohue said, “and I’m excited about our future.”