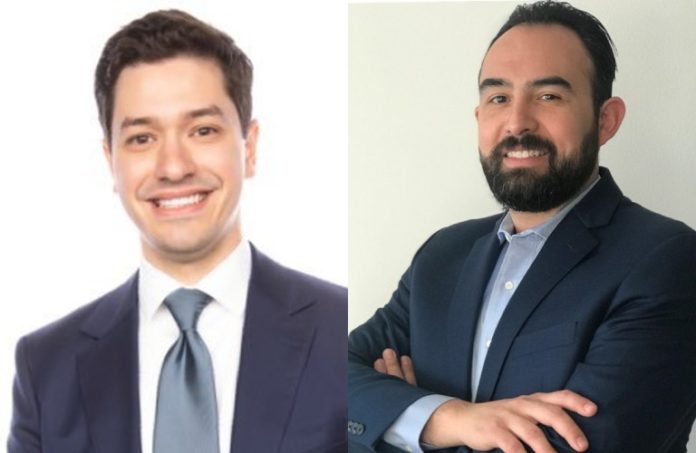 New Jersey City University has named Andrés Acebo interim chief of staff and secretary to the board of trustees and selected Adrian Franco as the inaugural executive director of the Frank J. Guarini Institute for International Studies.

Both will begin their positions Feb. 1. A formal announcement from the university is expected this week.

Acebo will serve as a senior adviser to President Sue Henderson on institutional planning, policy and program development. In addition, he will support Henderson as an ongoing liaison for external governmental affairs issues. As secretary to the board of trustees, he will provide oversight and coordination to committees.

Acebo is a partner and a labor and employment lawyer at DeCotiis, FitzPatrick, Cole & Giblin in Paramus. He most recently served on the vetting and due diligence team for the Hispanic National Bar Association and Alliance for Latinx Leadership and Policy partnership to identify potential Department of Justice nominees for President Joe Biden’s transition team.

“We are thrilled to welcome Andrés to NJCU,” Henderson said. “He will make valuable contributions to our institution in this critical leadership position. Andrés’ career experience working with partners on the state and federal legislative front and with leaders in higher education, public schools and the private sector and his knowledge of Jersey City and Hudson County will lead to much success in this role. We are thankful for his willingness to serve our university.”

Franco most recently was the director of community development finance and an officer for the Federal Reserve Bank of New York, where he supervised a portfolio of initiatives to attract capital to historically disinvested areas and build the capacity of community-based organizations to partner with financial institutions.

Reporting to Henderson, Franco will be tasked with building the strategic framework and then aligning the missions of existing NJCU offices and departments to stimulate interest by international businesses and educational institutions to partner with the school and the Institute.

The Guarini Institute hopes to extend the school’s reach beyond regional and national boundaries and focus on three key areas: research that explores the interconnections between the global future of work and higher education; preparation of students through abroad experiences and global work opportunities for the global future of work; and creation of international partnerships with institutions of higher education, businesses and organizations that foster and advance the global nature of work.

The Guarini Institute platform is intended to showcase NJCU’s longstanding commitment to leverage the strengths of a diverse, international community to foster and accelerate advances in education, research, business and innovation. These fundamentals are exemplified by the significant number of Fulbright Award winners and its ability to develop international trade forums at home and abroad through the Institute for Dispute Resolution.

“Congressman Guarini’s investment in the Guarini Institute for International Studies will be a gamechanger for our university as we continue to expand our global focus,” Henderson said. “Dr. Franco’s experience in education, development, foundation leadership and his past executive legislative roles in his native Mexico make him uniquely qualified to build our shared vision to make NJCU the statewide leader in enhancing business, culture and citizenry.”

Acebo and Franco both bring impressive credentials to the appointments.

Acebo has been recognized as a Rising Star by New Jersey Super Lawyers, a Top Latino Lawyer by Latino Leaders Magazine, a Top Lawyer under 40 by the Hispanic National Bar Association and as a Diverse Attorney of the Year by the New Jersey Law Journal.

In his private practice, Acebo has counseled and represented governmental entities, higher education institutions and public school districts, as well as closely-held corporations. His practice focuses primarily on employment and labor, education law and government/public entity law. He has also regularly been retained by governmental entities to conduct independent special investigations into alleged public official and employee misconduct and adverse employment actions.

Born and raised in Hudson County to Cuban exile parents, Acebo was the first in his family to attend college, graduating from Brown University, where he was a senior editor of the Brown Journal of World Affairs and a volunteer at the Howard R. Swearer Center for Public Service. He received his legal degree from Rutgers Law School, where he was elected president of the Association of Latin-American Law Students, vice president of communication of the HNBA Law Student Division and managing symposium editor of the Rutgers Race and the Law Review.

Acebo also served as a constitutional law research assistant and a pro bono mediator with the U.S. Equal Employment Opportunity Commission. He is actively involved in civic engagements and nonprofit activities to promote diversity, inclusion and equity broadly. He currently serves as board member of the Cuban American Alliance for Leadership and Education.

As the New York Fed’s director of education, Franco oversaw the bank’s programs for high school and college students. He revamped signature programs to increase participation of students from low-income neighborhoods and communities of color, engaged business schools to address culture reform in the financial sector and implemented an internship program with the City University of New York to foster the bank’s diversity goals. He also chaired the New York Fed’s Community Advisory Group and launched the Fintech Advisory Group.

Before joining the Federal Reserve Bank of New York, Franco served as executive director of Qualitas of Life Foundation, a nonprofit organization advancing financial inclusion of Latino immigrants. He also coordinated programs with K-12 teachers at Columbia University’s Institute of Latin American Studies and consulted for the New York City Department of Education and the Mexican Ministry of Public Education on policies and programs for immigrant families.