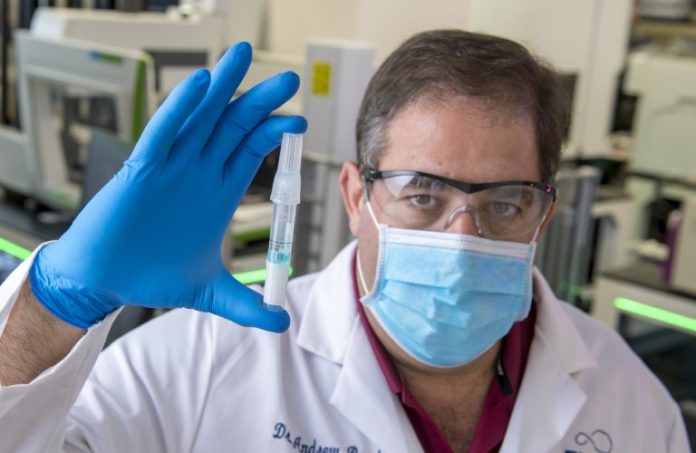 Andrew Brooks, a research professor at Rutgers University who rose to national prominence last spring when he led the creation of the first saliva-based coronavirus test, died unexpectedly Saturday.

A cause of death was not announced. Brooks was 51.

Brooks, while working as the chief operating officer of Rutgers’ RUCDR Infinite Biologics, helped create a new collection approach that utilizes saliva as the primary test biomaterial for the SARS-CoV-2 coronavirus, or COVID-19.

The Food and Drug Administration granted emergency-use authorization April 13. More than 4 million rapid response tests have been administered using this method since.

The method, which RUCDR developed in partnership with Spectrum Solutions and Accurate Diagnostic Labs, has allowed for broader population screening than the current method of nose and throat swabs.

Gov. Phil Murphy, who has praised Brooks on numerous occasions in the past and proudly boasted that this discovery was made in New Jersey, offered a tribute.

“We cannot thank Andy enough for all he did across his career,’’ Murphy said. “He will be sorely missed by many.”

Rutgers President Jonathan Holloway, Rutgers-New Brunswick Chancellor Chris Molloy and Rutgers Biomedical and Health Sciences Chancellor Brian Strom issued a joint statement: “We at Rutgers offer our heartfelt condolences to his family, including his three children, and with them we take pride in his achievements that will have lasting impact.”

“Professor Brooks was a behind-the-scenes hero in the battle against COVID-19. He provided invaluable counsel as part of the New Jersey Economic Advisory Council I established to provide input and ideas to me and members of the state Legislature on how to move forward on recovery from the coronavirus.

“Andrew’s integral contribution to ensuring the health and safety of the American people will be forever remembered.”

Brooks, who became CEO of Infinity BiologiX — the company that spun off of RUCDR — had said the saliva test was a significant advancement in the fight against COVID-19 when it was given emergency use approval.

“The impact of this approval is significant,” he said. “It means we no longer have to put health care professionals at risk for infection by performing nasopharyngeal or oropharyngeal collections. We can preserve precious personal protective equipment for use in patient care instead of testing. We can significantly increase the number of people tested each and every day, as self-collection of saliva is more quick and scalable than swab collections.

“All of this combined will have a tremendous impact on testing in New Jersey and across the United States.”

Brooks was named as an “industry hero” in the ROI Influencers: Health Care 2020 edition.

Born and raised in New Jersey, Brooks received his Ph.D. in neuroscience from the University of Rochester and later became its director of Medical Center Core Facilities. Four years later, he returned to New Jersey to direct the joint Rutgers/UMDNJ EOHSI Bionomics Research and Technology Center. In 2009, he became chief operating officer and director of technology development of RUCDR Infinite Biologics.

His career was distinguished by outstanding scholarship, service in the field of biomedicine and business activities designed to improve human health.

Brooks co-authored more than 70 publications and played a key role in providing consultation, biobanking and analytical services to many large research projects that have yielded insights into the genomic etiology of human diseases and the effects of environmental exposures. He also served 17 years as an adviser to the FDA as director of the Harlan (now Envigo) GeneScreen Laboratory and as co-founding director of the BioProcessing Solutions Alliance.

At AtlantiCare, Virtualist program has led to soaring number of primary...