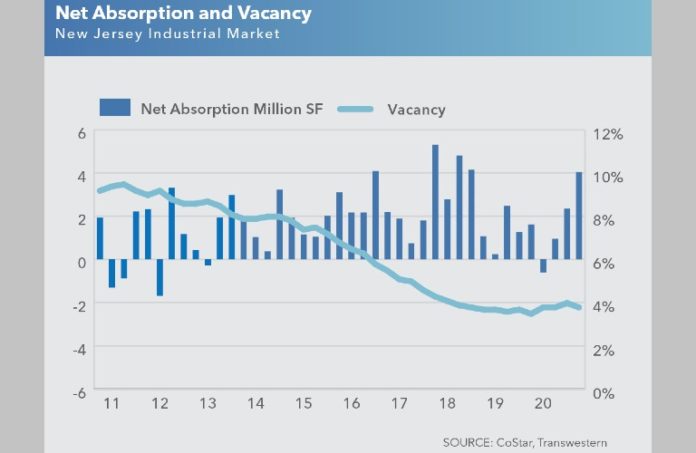 Statistics confirm that e-commerce continues to fuel industrial real estate growth in New Jersey, according to the latest report from Transwestern.

The real estate firm’s Q4 New Jersey Industrial Market report found that the amount of warehouse and logistics space absorbed for the year was up nearly 25% from 2019 numbers, which included 4 million square feet of positive net absorption in the fourth quarter alone.

“Following a prosperous decade of growth, the industrial property market appeared to be in the latter stages of a long peak period entering 2020,” the report, authored by Director of Research Matt Dolly, said. “That timeline has been extended, and the COVID-19 pandemic only heightened the demand for warehouse and logistics space due to the acceleration of e-commerce and the need for essential goods.”

The report also noted that, although job growth has been slow and erratic, or nonexistent, due to the pandemic, industrial-sector jobs have seen expansion.

In addition, spec industrial product has seen increased development due to the ongoing demand. More than 9 million square feet of new product hit the market in 2020, nearly double the 2019 figure, and 84% was leased by the fourth quarter.

And, with less than 10 million square feet was under construction in the quarter, demand continues to outpace supply, prompting a revitalization of spec product and repurposing of other properties such as offices and shopping malls.

Overall, the report noted, the sector has maintained strong fundamentals despite the pandemic, and the growth of e-commerce in the state continues to bode well.

“All of these factors are likely to trigger increased development in the outer rings, as well as targeting other property sectors for redevelopment opportunities,” Dolly wrote.