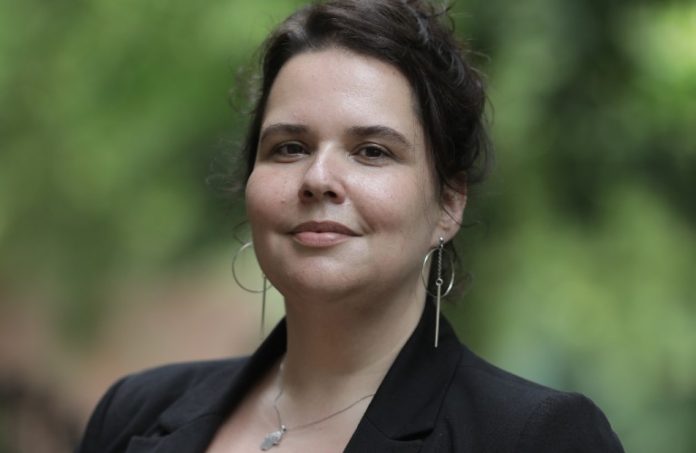 The story behind why Kivvit so eagerly pursued Pearl Gabel cannot be told in 140 characters or less.

And it won’t include the phrase “your mom” — even if that is the tweet from @NJGov, the official Twitter account of New Jersey, that helped launch the account to national acclaim and made Gabel a household name among social influencers.

Doing so doesn’t capture the immense talents Gabel has — and the variety of roles she will serve at Kivvit, the national public affairs and strategic communications firm that last week hired her to serve as its director of brand strategy.

“Pearl is an extraordinary storyteller who creates extraordinary content,” Moran said. “In addition to that, she has a unique background in print journalism, photojournalism, graphic design, video and digital. So, for a company like ours, it is the perfect combination.

“Content is still king. We have dramatic saturation in the communication space, especially visually and socially. So, you still have to have really unique, compelling content, whether it’s for a brand or an issue of advocacy. And then, you obviously have to think about distribution and execution on platforms — which is to say, which audiences respond best on which platforms with which kind of execution in the creative.

“So, Pearl sits in the center of what is the agency of the future, which we are in the process of building.”

At Kivvit, Gabel will sit at the intersection of data and delivery. She will serve as a national enterprise manager, which will give her influence over the firm’s 320-440 projects it handles annually from its six offices across the country.

“Every communications firm says they have access to data — that’s not the key anymore,” Moran said. “The key is the integration of all the data tools and tech that exists to offer the best insights so you can have the best strategy. Because, once you do that, you’ll have the best outcome. She’s got that kind of a brain in addition to having the creative chops. That combination together is powerful.

“Over the last series of years at Kivvit, we have invested in talents related to insights, data tools and tech, the integration of data, content, digital design. She is another expansion of that, with a very unique skill-set to help us scale.”

Moran said she had been following Gabel for some time.

And, while Moran said she loved Gabel’s storytelling — not to mention her ability to bring Jersey attitude and humor — it was her work ethic that really impressed her.

“As somebody who worked in government, I had such a unique appreciation for what Pearl built,” she said. “Not just in terms of the execution, but in understanding how relentless you would have to be to build a platform like that inside government.

“To build a platform from nothing that is that influential, that is that powerful, that has that much engagement from folks — not just followers, but folks who engage with the tweets — is the goal of any data-driven digital communications exercise for any challenge a client faces. And she did it in government, which is very difficult to do. Government is not positioned for the 2021 digital communications era.”

Kivvit is, Moran said, bringing us back to the idea of the agency of the future. Kivvit didn’t hire Gabel to tweet — it hired her to help show its clients how to get to where they want to go.

“Most entities that are reading this are either trying to manage crisis or create content that brings some virality around what they need to get done — it could be a brand, it could be a product, it could be an issue,” Moran said.

“The dream goal for most clients is to figure out how you can actually build that ecosystem, that echo chamber, around the audiences you want to engage with your content. So, she’s a proven commodity. She has the talent and the background needed for this multimedia, multifaceted approach. She has done the creative work that is really at the pinnacle of the work that is needed today.”

This ability — these outcomes — will be intoxicating, Moran said.

She already has proven she can do just that, in 140 characters or less.

“If she made Jersey sexy, she can make anything sexy,” Moran said.

Why Montclair-Bloomfield is more about mission than merger

Why Rowan’s Houshmand embraces county colleges — and hopes others will,...