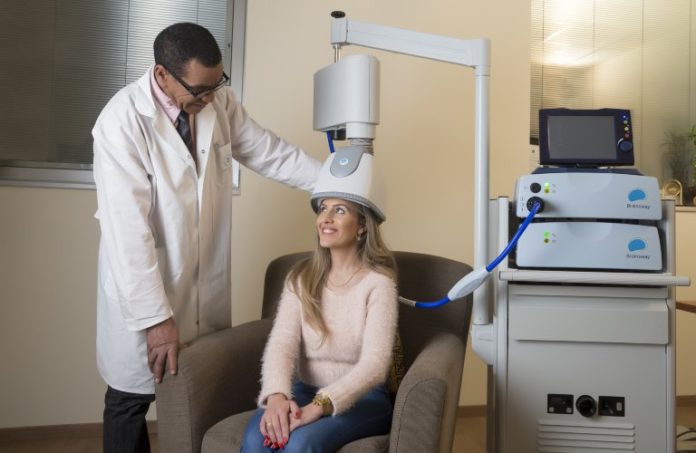 Chris von Jako says he often has referred to his company’s mental health treatment tool as one of medicine’s best-kept secrets.

Truth be told, during a time of crisis — as depression symptoms have increased three-fold in response to the COVID-19 pandemic’s devastating impact on mental health, based on a Boston University School of Public Health study published in September — he’d rather it not be a secret at all.

Jako is the recently-named CEO and president of Israeli-based BrainsWay, which has its United States base in Cresskill. BrainsWay’s device is an FDA-approved neurostimulation technology that can be used to address major depression, as well as OCD and smoking addiction.

He said prevalence rates of depression tripling — when an estimated 17.3 million adults in the country experience at least one major depressive episode, according to the National Survey on Drug Use and Health — is a scary prospect.

“In a typical non-COVID environment, you have that many adults with depression, and many — 50% — will visit their primary care physician and get an antidepressant medication that they have no response to,” he said. “Somewhere between 35-40% will have no response to any medication, which can lead to a lot of people feeling hopeless.”

For patients who have found the combination of antidepressant medications and therapy ineffective, BrainsWay offers a different therapy. The noninvasive device uses deep transcranial magnetic stimulation, or TMS, which involves the use of a high-tech helmet that uses magnetic fields to stimulate specific nerve cells in the brain.

This does require that patients go into a clinical setting. Jako said that’s become less of a concern on the part of patients and their providers during the spread of COVID-19 as more has been learned about proper decontamination of the devices and medical offices.

What Jako touts, and what’s backed up in some clinical trials, is that the treatment comes with few systemic side effects. Still, it’s not used as a first-line defense for depression — typically, that’s antidepressant medications.

“And that’s how the reimbursement looks at us as well,” Jako said. “Usually, we wait for someone to fail four treatments. Some major national insurance companies have changed requirements from four to two, which opens up greater access.”

The chief danger in that, he adds, “is people losing hope as they go from one medication to the next.”

So, he’s no big fan of the BrainsWay technology being kept a quiet solution to mental health woes. And he said patients who do show improvement after use of the device sometimes express anger about not finding out about it sooner.

Marketing in the time of coronavirus: Consultant explains how businesses are...