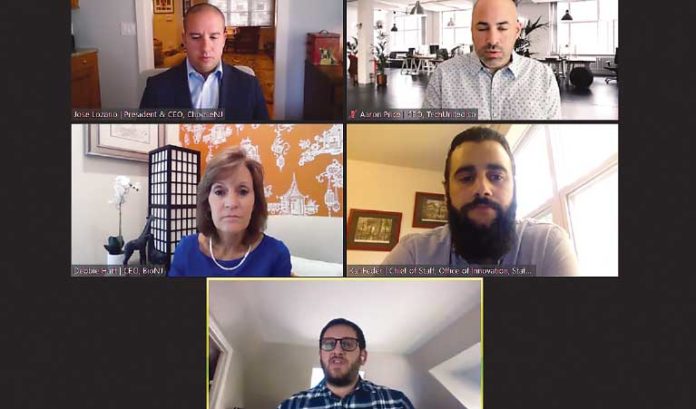 At a discussion titled “Keeping the Innovation State Growing” recently, the panelists agreed on one point: Work at tech and life science companies will look dramatically different in the years to come.

This trend presents opportunities for New Jersey and its real estate sector, and the state should be ready to capitalize on them.

The panel discussion took place at a conference called “Opportunities for NJ’s Innovation Economy during COVID-19,” sponsored by the New Jersey Economic Development Authority and co-chaired by Judith Sheft, executive director of the NJEDA’s Commission on Science, Innovation and Technology, and Serpil Guran, director of the Rutgers EcoComplex.

“One thing that’s interesting that the pandemic has really changed, I think, is our perception of space, and whether commercial space is a place to do business right now,” Feder said. He asked the panel to comment.

Lozano said companies with large footprints are currently reassessing their need for space. And, if they need space, “the open-floor plan in the middle of a pandemic isn’t the most ideal.” Companies located in high-concentration vertical spaces in high-rise buildings, he said, are asking: “‘Are there opportunities for me to sublease and take a smaller space closer to my employees?’ Because we all know, at some point or another, teams have to come back together.”

Lozano said he was not convinced that organizations will be able to sustain remote work over time.

“Because you’re losing the opportunity for employees and team members working together and figuring out what are the strategies to solve problems for the future,” he said. “… We’re human, at the end of the day, and we need that human-to-human interaction.”

He noted that the buildings that have embraced the “live, work, play” scenario will be perfectly situated for a return to the workplace.

Hart said she missed her team, and couldn’t wait to get team members back together in the same place. For the life science and biotech industries, real estate will remain essential.

“Lab space is one thing, manufacturing space is one thing that will be needed,” she said. “There will certainly be innovations, and perhaps some things will become more compact over time. But, at the end of the day, that is going to have to happen in real estate.”

Hart added that she was excited about the conversations she’d been having about reshoring — bringing manufacturing back to the United States — to avoid supply chain interruptions. She noted that 80% of all active pharmaceutical ingredients are made in China.

Speaking about the tech industry, Price said big tech companies like Dropbox and Airbnb are buying out their leases for tens of millions of dollars and setting up virtual workspaces.

He added that the solution will be different for each company, and that he believes that companies that adapt to a hybrid model will have a better chance of recruiting and retaining good people.

“Some 25% of Google’s New York employees live in New Jersey,” he said, and we have an opportunity to keep those people in New Jersey.

Leaving behind those Park Ave. addresses

Panelists thought a company’s address doesn’t matter anymore, so companies won’t be seeking a Park Avenue location. They will be more willing to set up businesses in New Jersey, as long as they have access to the New York and Newark airports. Panelists also thought that it was important that New York City bounce back, so New Jersey can thrive in its orbit.

Price added that he had often spoken about Hoboken’s potential to be a tech hub because of its proximity to New York, among other features.

“I’m not so sure that that matters so much anymore,” he said. “I think now it’s about, as we mentioned, the balance of work.”

Davidow noted that whatever is happening in the marketplace is really going to dictate what happens on the ground in New Jersey, and that, right now, people are determining how they want to use space.

“We have challenges to the current market, obviously, when we have very high-density vertical spaces,” he said. “How that impacts the market long-term is going to be an issue that we have to deal with over the next couple of years.”

He added that there may be an opportunity for more spread-out space based on new work arrangements.

“Some suburban office parks that have kind of gone by the wayside, and a lot of towns don’t exactly know what to do with them.”