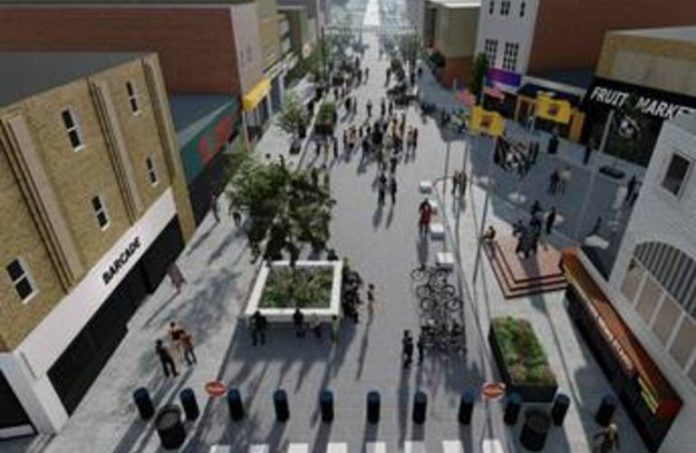 Fewer cars in the city means … more business for stores?

That’s the plan in Jersey City, where Mayor Steve Fulop and the municipal council announced Tuesday that they will be making a $6.7 million upgrade to the Newark Avenue Pedestrian Plaza. They say it will create one of New Jersey’s premier destinations for residents and tourists — greatly enhancing local businesses in the process.

It’s the latest step in a bold plan that begin in 2015, when the pedestrian mall was first closed to vehicles as an experiment to limit traffic and create a pedestrian destination. The plaza was expanded to a second block in 2018. Then, during the COVID-19 pandemic, it was expanded farther, to Grove Street between Montgomery Street and Christopher Columbus Drive as well as 1st Street and Newark Avenue.

“The creation of the Pedestrian Plaza was a risk our administration took when first elected, as there was significant pushback, but I think, over time, it has become clear to everyone that the changes we made there have attracted more people, allowed more businesses to open and created a destination spot for visitors and residents,” he said.

JC Contracting Inc. will be awarded the contract during the city council meeting Wednesday. The firm won the public bid following a design process, which included several public meetings to incorporate community input. Construction is scheduled to begin in April.

The upgrades include granite pavers to replace the green painted asphalt and elevate the street level to match the sidewalk for a more cohesive structure with greater stroller and wheelchair accessibility. Decorative trench drains will line the existing curb, rain garden tree planters will be installed and café lighting will be added for improved visibility.

A stage area also will be constructed for community events.

Rachel Sieg, executive director of the Historic Downtown Special Improvement District, is a big fan of the initiative.

“This is a great move on the mayor’s part,” she said. “This is a win-win for all involved, and the quicker we start, the better.

“We’re looking forward to construction start; with the pandemic, this is only going to help our local businesses. I’m thankful that the mayor pushed this through so that our struggling restaurants and businesses can benefit and recover more quickly.”

Kenny Caulfield, co-owner of the Ashford, is happy, too.

“These are extremely challenging times for so many of us business owners,” he said. “I’m especially grateful to have this type of support from the city, because this is what is going to make the difference for us.

“This makes us more of a destination. What has happened over the past few years here is breathing new life into Jersey City, and this permanency will bring us to a new level as a sought-after destination, with businesses attracting more businesses.”

The Newark Avenue Pedestrian Plaza upgrade comes after two other major investments in main streets throughout Jersey City, on Central Avenue and West Side Avenue. Both are underway:

West Side Avenue: This improvement project includes new underground sewer infrastructure to reduce pollution in local waterways and alleviate localized flooding. On the ground level, the streetscape design will get a significant facelift spanning from Broadway to Sip Avenue, with additional tree plantings and various green infrastructure installations for storm water absorption and beautification throughout the shopping district.

Future phases of the project will extend the improvements further south into Ward A.