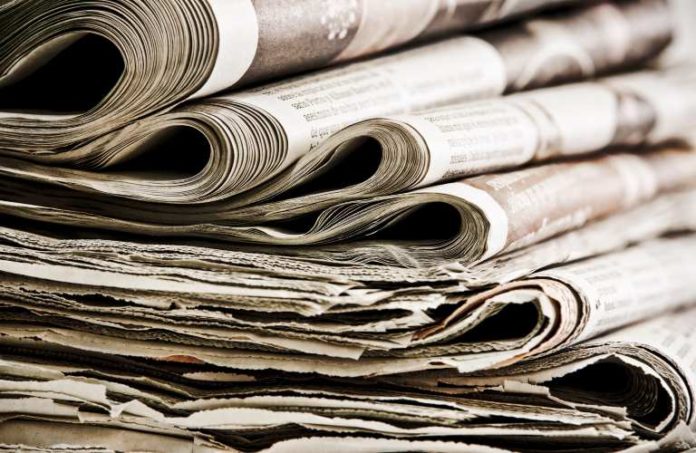 Editorial staffers of three Gannett-owned newspapers in North Jersey — the (Bergen) Record, (Morristown) Daily Record and the New Jersey Herald — announced Wednesday morning that they have formed a union in partnership with the NewsGuild of New York.

In a series of tweets at the newly created @therecordguild Twitter account, the group listed a number of reasons for forming the union, including job security, better compensation and more diversity in the newsroom:

“For decades, the masthead of the Record newspaper of Bergen County has called itself the friend of the people it serves.

“It’s in that spirit that we, the employees of the Record, the Daily Record and the NJ Herald, have formed a union as part of the @newsguild.

“North Jersey deserves a news organization that holds power to account, tell its residents’ stories and represents its diverse communities, from Fort Lee to Morristown to Vernon.

“Gannett has failed in this duty by laying off hundreds of employees, steering away from local news coverage and ignoring pay equity for its workers. We want to help change that.

“We want to build a more stable work environment so local news can thrive, which is why we have come together and are asking Gannett to recognize our union.

“We want a seat at the table so when decisions are made that affect us and affect the communities we cover, we can help make those decisions.

“With a united workforce, we can create the equitable, representative and profitable conditions we need to survive and thrive.”

Sixty-six employees have signed on to the guild.

The members have asked for voluntary recognition of their union. If Gannett does not acknowledge the union, the guild can ask the National Labor Relations Board to conduct an election.

Gannett papers have been laying off staff in the state for years. In the group’s mission statement, it indicates more than 250 people at the three papers have been laid off since 2016. This would be more than half the staff. It also notes their newsrooms have lost an “alarming number” of reporters and editors of color.

The union notes in its mission statement that it has been an essential source for local, statewide and regional news.

(Editor’s note: The Record broke the Bridgegate scandal, one of many big stories members of this new guild have broken over the years.)

“Our readers depend on our journalism to hold the powerful accountable, inform our democracy and provide a voice to diverse and underrepresented communities,” the mission statement said. “For far too long, corporate owners at Gannett have made decisions that have undermined our ability to fulfill this mission.”

Here is the group’s mission statement, taken from its website.

“As staff at NorthJersey.com, the Bergen Record, the Daily Record and the NJ Herald, we have been instrumental in providing communities in North Jersey and beyond with an essential source for local, statewide and regional news. Our readers depend on our journalism to hold the powerful accountable, inform our democracy and provide a voice to diverse and underrepresented communities. For far too long, corporate owners at Gannett have made decisions that have undermined our ability to fulfill this mission. We have formed a union with the NewsGuild of New York to address the issues that affect all of us and better advocate for ourselves, our professions and the communities we serve.

“Our reporters have continued to provide groundbreaking coverage of COVID-19, providing a vital resource to New Jersey’s communities during a historic pandemic. With increasing workloads and dwindling resources dedicated to local news, Gannett expects the staff will continue to accomplish more with less. All of this leads to a newsroom that is constantly bleeding talent and struggling to effectively report on the news that matters. Our health care benefits are poor and give us few options and our retirement plans have been cut. We deserve higher wages, well-defined minimum levels of pay and a transparent and standardized system for promotion and pay increases. We have unionized to reverse this trend by ensuring that we are fairly compensated for the work that we do, improving health care benefits that we and our families depend on, putting an end to unilateral changes and cuts to our retirement plans, and opposing unreasonable workloads and demands.

“Since 2016, we have seen more than half of our colleagues lose their jobs, with cuts of over 250 people at the Record, the Daily Record and the NJ Herald. Staffers who were unceremoniously laid off include a reporter nearly nine months pregnant and a 30-year veteran reporter who was forced to take a buyout after missing a single email to opt out of the process. By forming a union, we are taking a stand for respect and dignity, and greater protections against unjust terminations and reductions in force. We are uniting with NewsGuild members around the country in a movement to save local news and ensure a seat at the table when decisions are made that affect our paper and the news coverage we provide. There is no journalism without journalists.

“New Jersey is one of the most diverse states in the country: nearly half of its 8.9 million residents are people of color, and we have the third-largest population of foreign-born residents in the United States. However, neither our staff nor our stories adequately reflect the communities we serve. Our newsroom has lost an alarming number of reporters and editors of color, something that we have keenly felt as we continue to strive to cover the evolving struggles for racial justice in our society. We have joined the NewsGuild in order to effectively advocate for greater diversity in our hiring, our coverage and our interaction with the communities we serve. We know that in order to advocate for our readers and our profession, we must advocate for ourselves as well.

“We have formed a union to make sure we can continue to provide quality news coverage for the entire North Jersey region for years to come. We are joining the NewsGuild in a wave of successful union organizing in Gannett newsrooms across the country. By recognizing our union now, and immediately beginning the negotiation process, Gannett can demonstrate that it respects its staff and is committed to ensuring the strongest newsroom possible.”

Campbell makes $2.2B sale of unit to KKR official