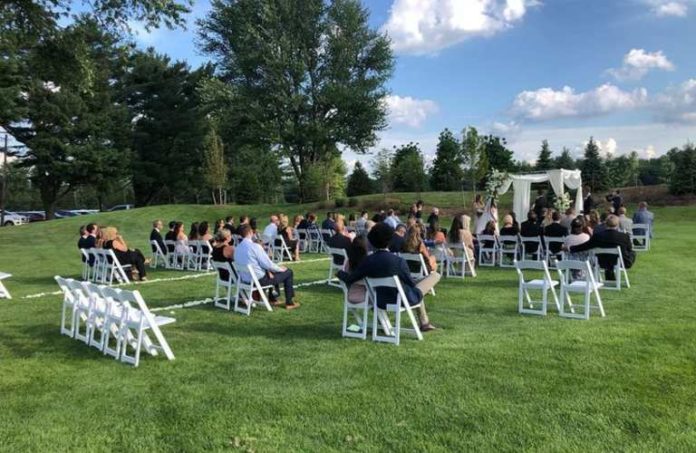 A New Jersey country club that was in the midst of cleaning up its once-dusty image was teeing up for another banner year in 2020 … when it found itself in the wrong industry (hospitality) at the wrong time (a global pandemic).

It was a hole in more than one of Edgewood Country Club‘s plans.

But, after having to adjust operations at the Bergen County golf and country club to help quell a rising tide of COVID-19 infections locally, the facility’s leadership believe 2020 still represented the banner year they hoped for.

Edgewood’s general manager, Daniel Somogyi, reported that, while it was impossible to not feel the bottom-line sting of lost catering dollars — with pandemic-stalled weddings, in particular, being the country club’s largest revenue generators in years past — the country club’s upward-trending membership held strong.

“We lost finances, as sometimes businesses do, but we also gained support and goodwill from members,” Somogyi said. “In hospitality, you have to make guests feel valued and special, and those are the things we did.”

Edgewood Country Club, which was founded in the ’60s, had been facing regular membership declines until it was purchased by Woodmont Properties in 2015. Woodmont renovated the facility’s main clubhouse, its more than 200-acre golf course and other aspects of the business to make it more a family-friendly attraction.

Somogyi said membership has grown annually and doubled its numbers in the years since the change. Revenue-wise, the company’s catering to members and nonmembers of the club went from around $87,000 to almost $3 million before the pandemic’s start.

Candice Timmerman, an event coordinator for the business, said that business came to a halt during the state’s initial lockdowns.

But, recent state guidance on wedding ceremonies and receptions — with outdoor receptions limited to 25 people, and just 10 indoors — has paved the way for “micro-weddings.”

Timmerman explained that the club’s staff and guests socially distance by sitting at tables of two and following other new restrictions. Couples have responded positively to this experience, she said.

“It may have not been exactly what they envisioned it to be,” she said, “but, in our new world, it still can be wonderful.”

Somogyi said other country clubs have more recently started to push guest totals into the several hundreds, as the ceremony portion of outdoor weddings have no attendance cap, but Edgewood hasn’t.

Paulette Strauss, managing director of membership and marketing for the club, conveyed that Edgewood’s leaders have tried to maintain the perception — by members as well as the general public — that they’re being as safe as possible.

The facility’s management plunged more than $100,000 into personal protective equipment and facility updates, including ultraviolet-sanitizing equipment.

It has been a difficult time for hospitality businesses, but Strauss said maintaining safety protocols has been an easy — however costly — way to keep in good standing with the country club’s members.

“I do believe the fact that a lot of families with children that had summer plans derailed took a new interest in (Edgewood) as a place of respite,” Strauss said. “We were helped in that because we were doing things safely, and word got around about that.”

Somogyi said that’s allowed the country club to record more golf rounds than ever before, despite the loss of annual golf outings and tournaments.

Ultimately, he said, it’s not just about scoring points.

“It’s a demographic that’s really important to protect,” he said. “And I consider it a feather in our cap that we were able to do that, and that people didn’t also have to sit at home all day to accomplish that.”