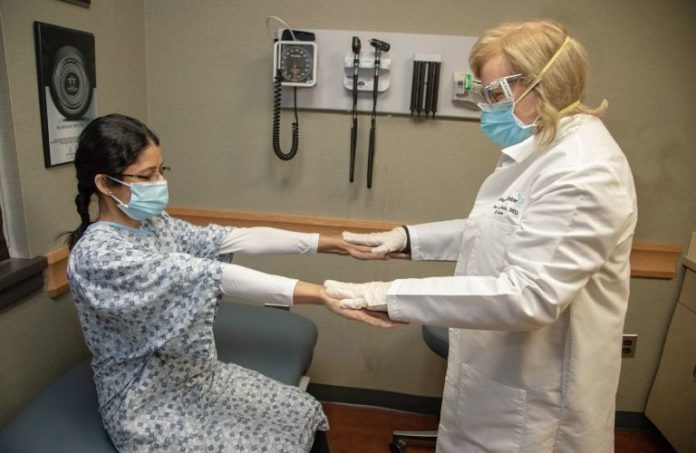 One young dad lost the dexterity in his left hand; a businessman had headaches and cloudy vision in one eye; and a new mom almost dropped her newborn when her arm went numb. They are just a few of the thousands of Americans who started suddenly experiencing weird, inexplicable symptoms.

The commonality? They were all subsequently diagnosed with multiple sclerosis, or MS. During March — MS Awareness Month — it’s vital to recognize that the medications available today make MS a very manageable disease, reducing and sometimes completely eliminating symptoms.

In fact, the young dad, businessman and new mom are now doing extremely well, thanks to the advanced care they’ve been receiving at The Alfiero & Lucia Palestroni Foundation Multiple Sclerosis Center at Holy Medical Center. Their lifestyles are vastly improved from those who had MS only a generation ago, when there was no treatment at all and the best doctors could offer were steroids to help calm the effects of the disease.

“Many people had to be hospitalized, sometimes as frequently as once a month, because of relapses,” Picone said. “We had nothing to offer them except steroids. Today, we have 19 approved treatments, and we’ve significantly improved patients’ quality of life. It’s a hopeful time in the world of MS.”

Catherine Gural is the embodiment of the progress that’s been made in treating MS. She is the young mom whose arm went numb. She had gone to the emergency department of a hospital near her home in South Jersey when tingling and numbness began in her foot and suddenly started to travel up her legs into her abdomen. Gural received her diagnosis several days later.

“It was horrible — the doctor in the ER didn’t tell me what was wrong until I called her several days later after my arm went numb and I almost dropped my infant son,” Gural said. “I was 24 years old and didn’t know if I was going to die. I knew nothing about MS and was worried who would take care of my son.”

Treatment from Picone at the MS Center has enabled Gural to maintain a well-rounded, active life. She is raising three children with her husband, has a challenging career in wealth management, volunteers her time doing advocacy work, is finishing up work on her master’s degree and is an elected official in her town.

“I fell in love with Dr. Picone and the center,” Gural said. “It was so nice to be in a place where this was their entire focus. The whole staff is really tuned in to what I need. And they are constantly doing research, which gives us patients access to therapies we might not get somewhere else.”

Multiple sclerosis is an immune-mediated (affected by the immune system) disease of the brain and central nervous system. The immune system eats away at the protective covering (myelin) of nerves, causing inflammation and disrupting communication between the brain and the body. Symptoms may include vision loss, fatigue, memory loss, pain and impaired coordination. Though the cause is not known, researchers believe a combination of genetic predisposition and environmental factors, even including what people eat, plays a huge role in who develops the disease.

Much of the research into MS has focused on stopping the inflammation triggered by the disease, and, largely, these efforts have been successful. The current generation of medications has kept many patients’ illnesses under control. Next, the goal is to find treatments that reverse the damage caused by MS and slow the disease progression.

Several of those medications were accessible to Holy Name patients through clinical trials years before they were available for prescription use. The Medical Center’s research work in clinical studies continues for MS and a host of other diseases.

“Right now, we are ramping up clinical trials to determine whether medications are effective at repairing and stimulating new myelin growth,” Picone said. “We’re working on reversing or slowing the progression of the disease in people who haven’t seen relief with other medications.”

Unwinding our COVID-19 pandemic safeguards after vaccination: A path forward for...